India – After the surprise merger of its RMW film services division with Prime Focus, Reliance ADAG looks set to sell off its Big Cinemas operation. Good analysis as always from Variety’s Patrick Frater.

The company is in advanced negotiations to sell its Big Cinemas circuit to an unidentified private equity firm, according to Indian business media. RMW is also reported to be holding similar talks with PVR and Inox Leisure, the country’s two largest cinema operators. Big Cinemas operates some 280 screens across India, making it the third-largest circuit. Born from the Adlabs group that Reliance ADA acquired in 2006, Big Cinemas was previously the largest exhibitor in India. But it lost ground to its smaller rivals because it opened too many single-screen cinemas and missed some key acquisitions. LINK

India – And like most other multiplexes, Big Cinemas has completed the transition to DCI-grade digital cinema while most single-screen cinemas in India now have lower grade e-cinema systems from the like of UFO Movies, meaning that the country is close to complete digitisation.

With nearly 95 per cent of Indian cinema screens now digitised, the industry is expected to see buoyant growth in the long run. The Government has approved an anti-piracy plan for combating piracy which impacts movies’ box office collections. The Government has also signed co-production agreements with nine countries including Italy, Brazil, Germany, France, New Zealand, Poland and Canada. India is also a sought after shooting location, as the Government gave permission to 31 foreign production houses in 2013-14. Also, the first phase construction of the National Museum of Indian Cinema in Mumbai has been completed and will open for the general public shortly. LINK

Germany – Paperless/digital cinema tickets have been given the go-ahead by the film distributors’ trade body in Germany.

The widespread introduction of paperless movie tickets, according to information from the Association of Film Distributors (VdF) now from antitrust perspective possible. The Society of Friends and the movie theater organizations involved had made the introduction of digital tickets among subject to approval by the antitrust authorities. This confirmed, according VdF CEO John Kling spur that there was after the “present state of affairs will not give rise to activity”. With this release, the way for the implementation of the proposed regulations is free. Of the Society assume that in August the first programs to be submitted for preliminary review. LINK

UK – The Director of Curzon Home Cinema, Phil Mordecai, outlines the plans (and challenges) of the cinema/VoD brand as it looks ahead.

“We don’t believe we’re just a VoD platform,” he suggested. “From a consumer point, we’re a virtual venue,” he said, noting that in setting up the Curzon Home Cinema, the challenge was how to replicate Curzon’s value in design and approach in the ‘virtual’ setting. According to Mordecai, the successful launch of the service had been achieved by working with partners such as Easel TV, Microsoft and PayWizard, which had enabled Curzon to pioneer ‘day and date’ distribution of movie titles in the UK. “It sounds easy, but it’s not. Hollywood doesn’t like it; we’re breaking the mould of Hollywood and what makes us unique is that no other company has this full value chain ownership from acquiring, owning, distributing and showing. That’s important. We can guarantee volume and quality of product. Essentially, we’re a real cinema; not just sticking a badge on [the service].” LINK

Advertising UK – Cinema advertising spend is up by almost half a percent in the first quarter of the year in the UK. It might not seem like much, but at a time when Internet ad spend is devouring everything before it, this counts as good news, with more improvements to come.

Cinema ad spend was up 0.4% in Q1 2014 reaching a value of £36.3m, according to the latest figures from the Advertising Association/Warc Expenditure Report. Growth is expected to accelerate throughout 2014, notably in Q3 with the summer blockbusters, for an anticipated overall growth of 6.4% this year. LINK

Event Cinema Germany – Not content with just dominating the football field, Germany is now set to impress the event cinema field with Wagner and Bayreuth beaming to cinemas. Short notice only.

BAYREUTH GOES LIVE, TO A CINEMA NEAR YOU July 9, 2014 by norman lebrecht 3 comments. Tannhäuser is to be screened on August 12, the festival has announced. No details of participating cinemas. The insurance giant Allianz is picking up the tab. Details and promo video here.

Cinema Opening/Closing UK – Durham could soon get a multiplex to complement the sole Gate cinema.

London-based property company Clearbell Capital today (July 8) confirmed it has bought The Gates shopping centre, in Durham for £11.85m. The new owners say it is too early to reveal precise plans, they have long-term ambitions to open 30,000 sq ft of new restaurants in the riverside complex, anchored by what they claim will be the area’s largest multi-screen cinema. LINK

India – Could Mumbai soon be getting a dedicated art-house screen?

Hope flickers in the inauguration of the Matterden Centre for Films and Creations at the recently refurbished Deepak cinema in Lower Parel in south-central Mumbai. Matterden has been set up by the Enlighten Society for film, and, following a soft launch on 11 July, will screen independent films from September. The idea is to show films, an evening show a day, for Rs.100 over the first few weeks—the prices will go up once they start showing indie films. This will allow The Deepak to continue showing the latest Hindi or English films the rest of the time. LINK 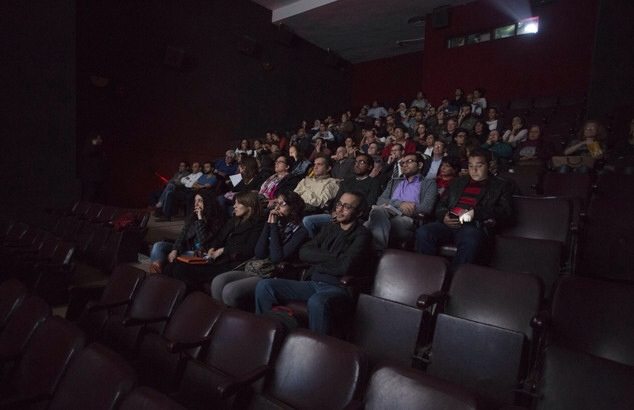 Egypt – Meanwhile Cairo already has what Mumbai is aspiring to; but an art-house cinema exist precariously in a quasi-democracy like Egypt.

Behind the door, a project launched by the production company he founded aims to bring films in that tradition to a new audience. The 170-seat Zawya cinema hopes to generate a market for alternative, international or independent films in Egypt, where one of the world’s oldest movie industries has fallen into decline. Egypt currently produces only around 20 films a year, less than a quarter of its peak late last century. Its funding and profits have been hit hard by DVD pirating and downloads, as well as growing religious conservatism. Three years of instability following Egypt’s 2011 Arab Spring uprising only worsened the picture. The films that do get made are largely geared toward a quick buck — slapdash comedies and over-the-top melodramas with poor production values. The project hopes to bring quality films to the streets of the Arab world’s most populous country. LINK 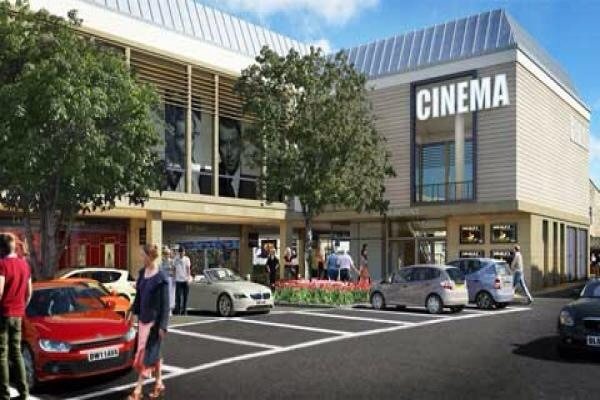 UK – A second attempt to win permission to build a cinema in Cirenchester.

AN APPLICATION for a cinema in Cirencester town centre has been resubmitted after being legally challenged by a nearby company. In November 2013 members of Cotswold District Council’s planning committee overturned a recommendation to refuse the building of the entertainment complex, which includes a four screen cinema, six shops, four restaurants and a 110-bed hall of residence for Royal Agricultural University (RAU) students in Brewery Court, behind Castle Street. LINK

The View of the Cinema Plot at Gebhardtstraße in Fürth

Germany – Sounds like a major multiplex battle is rumbling in Northern Bavaria.

The stalemate in terms of multiplex cinema will take no end – but now is the head of the municipality of patience in the end. Because Alfred Oh has remained on the ground at the Gebhardt road for months idly, sets economic consultant Horst Müller the builder puts the gun at his chest. Oh, meanwhile, is looking to blame others and sees “on the way”. LINK

UK – Hopes to create a new cinema in a failed mall in Durham.

A Durham shopping centre which had been in administration has been bought for £11.85m by a London-based company. The Gates Shopping Centre in Durham city, which includes retail units, residential properties and parking, has been bought by Clearbell Capital LLP. The new owners hope to build a cinema, new restaurants and student accommodation at the site, as well as managing the existing complex. LINK 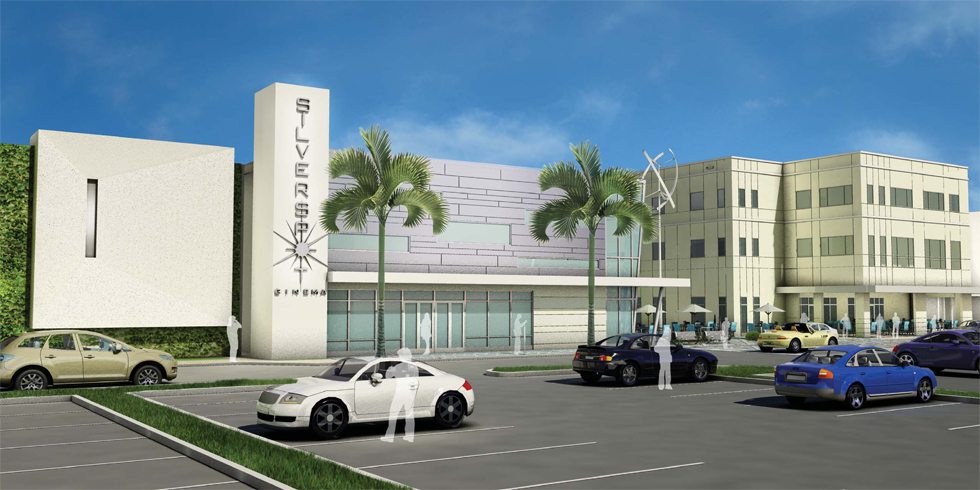 Artist’s Rendering of the Silverspot Cinema in Coconut Creek, FL

USA (FL) – A new multiplex is coming to Florida.

We’ve noticed some big changes happening at Promenade in Coconut Creek. First, as you can see above, they will be adding a theater: Coming Fall 2014: Silverspot Cinema, a 47,000 square foot multiplex 12-screen theater with leather stadium seating, plus a restaurant. Their map of the site shows the theater on the currently empty piece of land on the southwest corner of the property behind the south parking structure. LINK