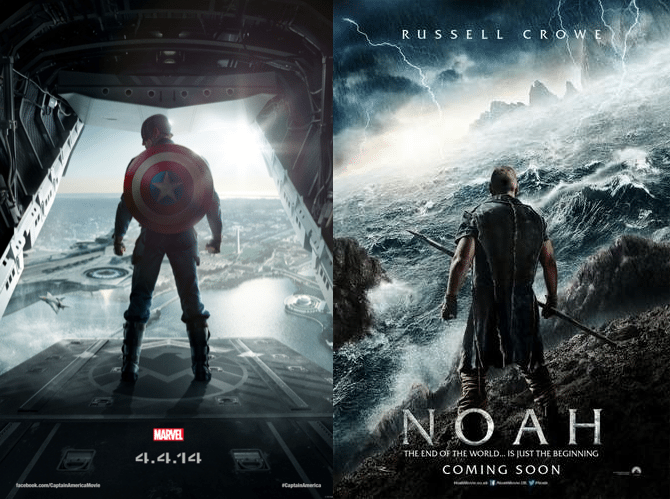 NATO President John Fithian was vocal at CinemaCon about getting studios to spread the releases more widely than just the summer and holiday windows. This year it looks like he is getting his wish, with summer already starting in April with films like Noah, Captain America 2, Rio 2 and Transcendence.

As Bloomberg news notes in an article with the telling title ‘Studios Dodge Slugfest Opening ‘Captain America’ in April‘:

The studios are angling to avoid a repeat of last summer, when too many big-budget films came out at the same time. While industry sales set a record, the releases cannibalized each other. By staggering them, studios and exhibitors limit head-to-head competition for target audiences and cut the risk a costly picture will be overshadowed too quickly.

“What you are seeing this year is absolutely a conscious move to space out releases,” Jeff Goldstein, executive vice president for domestic distribution at Warner Bros., said in an interview. “It is an important change.”

Exhibitors are also keen to stress the benefits that an extended release schedule brings.

“You’re always going to want certain films to be in that key summer period, because children are out of school and you want that repeat business,” Amy Miles, chief executive officer of Regal Entertainment Group, the No. 1 U.S. cinema chain, said at a Deutsche Bank conference last month. “But I do think the studios are getting better from a scheduling perspective.”

However, it is worth remembering that with international markets (read: China) growing in importance, the US ‘summer window’ is becoming less significant for Hollywood studios keen on big global returns for their films. 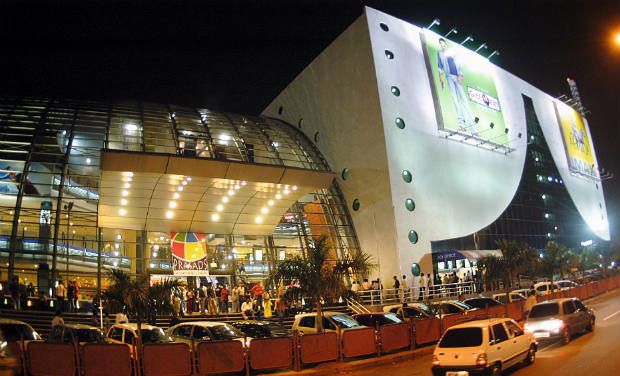 India: Exposing lax security at malls and cinemas in India, an undercover investigation in Hydrabad saw teams being able to smuggle guns into Prasad’s Imax cinema:

The decoy teams deployed by the central zone police of Hyderabad exposed security loopholes at several busy multiplexes and shopping malls in city on Wednesday. According to Central Zone DCP VB Kamalasan Reddy, the decoy teams managed to enter Prasad’s I-Max multiplex at Necklace Road, Big Bazar shopping complex in Abids and several other places in the city with guns. “We have found out that the screening of customers at certain shopping malls and multiplexes is not up to the mark and notices will be issued to the managers of these places immediately,” the DCP said.  LINK

UK: The Lords (the Upper House of the British Parliament) debated cinema culture in UK yesterday, called by Labour’s Lord Stevenson of Balcamara (former head of the BFI). It was a wide-ranging discussion on filmmaking, government funding for BFI and DCMS, event cinema, Oscar awards and more. Here is part of the transcript. 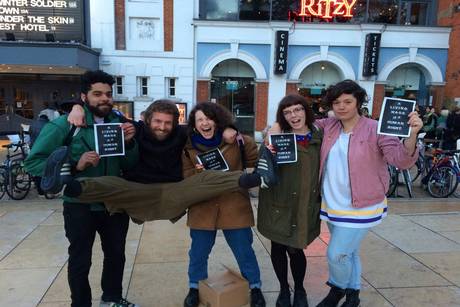 UK: Staff at south London’s most popular cinema have voted to go on strike.

Workers at the Ritzy, in Coldharbour Lane, Brixton, voted for strike action this week after Picturehouse Cinemas refused to pay the London Living Wage – the recommended rate for people living in the capital.

Members of the Broadcasting, Entertainment, Cinematograph and Theatre Union (BECTU) voted for strike action to raise wages from £7.24 per hour to £8.80.  LINK

UK (Scotland): The issue of autism-friendly cinema screenings has gone all the way up to the Scottish Parliament, where it resulted in a MSP motion.

Applauding Autism-friendly Theatre and Cinema – That the Parliament applauds the numerous theatres and cinemas around Scotland for showing autism-friendly performances in 2013 in order to provide an enjoyable experience for both children and adults with autism;…

…commends the various autism-accessible showings at cinemas including, but not limited to, Vue and Cineworld, and hopes that the tradition of autism-friendly screenings and shows continues to grow to enable people with autism, as well as their families and carers, to enjoy access to entertaining performances in 2014 and beyond.  LINK

The motion was introduced on World Autism Day by an SNP member of the Scottish Parliament. LINK 2

USA: Screenvision is doing all it can to lure advertising dollars from the small to the big screen as US cinema advertising revenues rose 6.5% in 2013 to a record $678 million, after slight dip the previous two years.

An “upfront” presentation to marketers by movie theater ad sales firm Screenvision in New York on Wednesday night was a reminder that the small category in revenue terms has bigger ambitions. Screenvision, one of two big cinema ad-sales firms, is hoping to grab some ad dollars that now go to television, even borrowing language from TV by pitching its “Weekend Daypart” advertising opportunity.

And in an era when digital video recorders make it easy for TV viewers to skip over ads, marketers are paying more attention to cinema, which show ads before movies begin.

“We really like the fact that it’s a captured audience,” said Tim Chaney, vice president of marketing communications at Kia Motors America, which uses cinema ads for major new- car campaigns. He says Kia develops its creative work “with cinema in mind.”  LINK 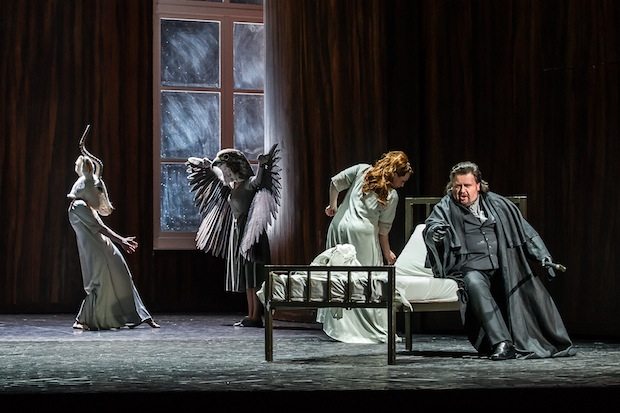 UK: The Spectator’s reviewer Michael Tanner asks if it is snobbery that keeps opera critics in mainstream media from reviewing the Metropolitan opera cinema transmissions.

I remain puzzled that, so far as I know, no daily or weekly paper carries reviews of the New York Met opera relays (I’m not a denizen of the blogosphere, where they may well swarm). To judge from the number of cinemas that show these live relays, and from how crowded most of them are, clearly more people see opera in this form than in any other. And many of those people will be experiencing opera live for the first time in cinemas, and may well never go to an opera house. I suspect there is a strong element of snobbery involved on the part of non-reviewers, as if one hasn’t really been to a performance unless one was actually in the theatre where it was taking place.  LINK

He also examines his own changing reactions to opera in cinema.

UK: A missed opportunity not to screen this boxing match in cinemas?

Heavyweight boxer David Price attended the Bierkeller in Liverpool ONE tonight (April 2nd) to talk about his latest fight due to take place on the 12th of April against Ondredj Pala.

The award-winning German-themed bar, Bierkeller, Liverpool ONE, which features Shooters Sports Bar, will begin their David Price sponsorship deal in style, sponsoring his first fight on 12th April. Bierkeller boasts one of the biggest non-cinema 3D screens in the UK and they’ll be making the most of the big screen to show David’s first fight live from Denmark.  LINK 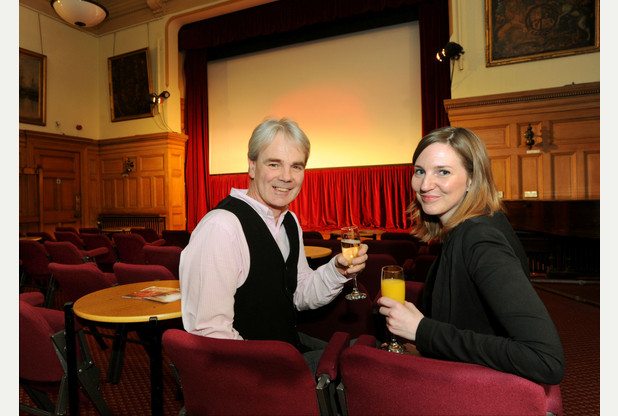 UK: The managers of the small Guildhall cinema in Gloucester is cracking open the champagne after the gorgeous 100-seat cinema was able to go digital.

Councillors, community figures and film buffs flocked to Gloucester Guildhall on Tuesday for the official launch of the venue’s digital cinema.

For the past 25 years the Guildhall’s cinema has used the old style 35mm reel, but in February this year the technology was upgraded and digitised.

The move means the latest blockbusters will be available at the Guildhall quicker than before, and a more diverse, varied and fuller programme is now on offer to the people of Gloucester.  LINK

Saffron Screen has a reputation for high quality presentation, having been awarded the BKSTS Projection Team Of The Year in 2010. The cinema has a professional standard digital projector and film server, together with additional equipment for screening live events via satellite. Applicants do not need direct experience, but a basic knowledge of IT would be useful. Full training will be provided.

Projectionists are required to do a minimum of two screenings per month and in return will be given a free pass to any films shown at Saffron Screen.

Goodbye film and hello digital. The De Pere Cinema is working on bringing its equipment into the 21st century.

The theater was closed Wednesday while crews worked on the upgrade. The changes were made possible by a local donation campaign…

Theater owner Mike Radue says from the old projector, to the tired transistors, everything must go.

“Somebody wants some scrap iron, here it is. It’s basically scrap iron. This projector is from the seventies. It’s not old enough to be collectible, but not new enough to be converted,” said Radue.  LINK 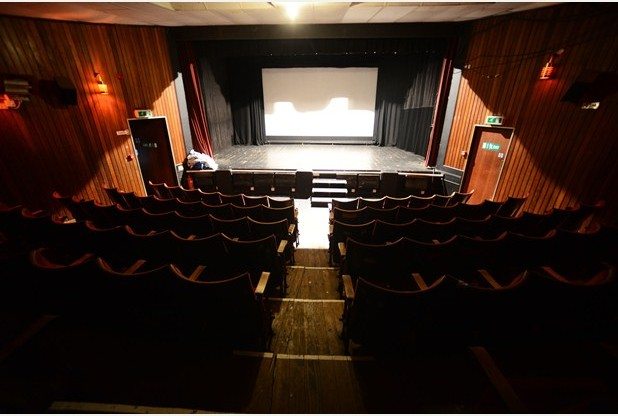 UK: Bristols art and cinema centre has been saved thanks to intense community fundraising.

A BRISTOL Cinema and arts venue’s future has been secured after the volunteers who run it managed to drum up £185,000 to buy it from private landlords in less than a year.

The landlord of The Cube offered its 150 volunteers the chance to buy the building’s lease when it ran out in December last year if they could drum up the funds. And thanks to generous donations and fundraising projects, The Cube managed to raise more than £200,000 and will now be completely independent.  LINK 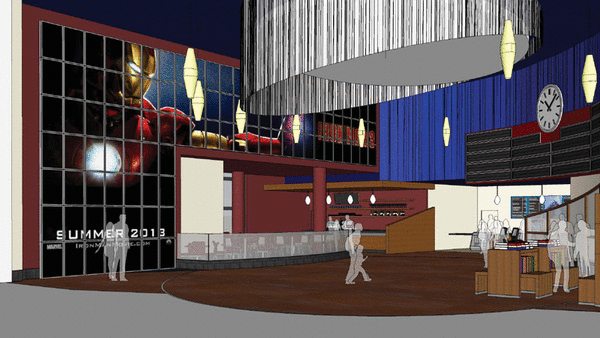 USA (DC): The Bethesda suburb of Washington DC will be home to first ArcLight Cinema on the US East Coast.

The first East Coast location of the luxury ArcLight Cinemas chain is the centerpiece of Westfield Montgomery’s large scale renovation.

Westfield has released some early renderings of what the inside of the movie theater, being built on top of a parking garage, will look like.
The 16-screen, 2,400-seat theater is set to open this fall next to the redone Dining Terrace, which will open this summer.  LINK 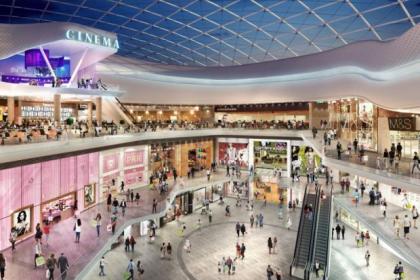 UK: A luxury cinema will be part of the shopping mall extension of Glasgow’s Buchanan Galleries by 2017.

As well as airing the latest films, satellite broadcasts, music, arts and events, the new venue will feature a VIP gallery bar and lounge, plus a lobby bar and lounge to allow visitors to Buchanan Galleries to be entertained throughout the day and night.

These three questions, from a longer interview by NYArts Magazine, tell you all you need to know why the New York Times’ film critic A.O. Scott is our favourite:

NAB: Who would you say has had the biggest influence in the field of film?

NAB: What is the state of film now?

AOS: The state of film is that it is almost no longer “film” in the technical, photochemical sense. At the same time, moving pictures are everywhere, and there is more cinema in our daily lives that would have been imaginable even a generation ago.

NAB: Where do you see the field of film headed?

AOS: Film has been dying since the introduction of sound. It kept dying through the rise of television, home video, and now the Internet. I expect it to continue its death spiral for another 100 years or so.