SampoMedia asks if art-house films are the new event cinema. Given the recent complaint of the New York Times film critic Manohla Dargis that too many independent films get released, the question of how to stand out in a crowded marketplace that anyway competes with other entertainment platforms for time and money is a relevant one.

After being blithely dismissed as mere ‘alternative content’ – until people started going – the film industry has come to see opera more as an oversized cuckoo in an already crowded nest.

But in recent months, a different and more optimistic view is emerging. To borrow the politically-incorrect phrase, the ‘fat lady singing’ doesn’t mark the end of an era but the opening of a new one.

In short, a number of projects are beginning to test the idea that the best option for arthouse film is to take a leaf from the libretto of opera.

Las Vegas: This year’s CinemaCon is tracking to be bigger than last year’s. We will of course be covering it on the ground.

CinemaCon formally announced a five % increase in attendance over its 2013 show at the same point 11 days before each convention. CinemaCon, the official convention of the National Association of Theatre Owners (NATO), runs March 24-27 at Caesars Palace in Las Vegas.

For the third straight year, all seven major Hollywood studios will present movie screenings or star-packed previews of their upcoming slates.  LINK 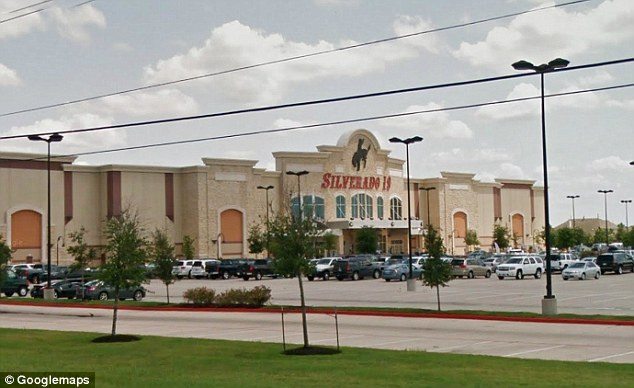 USA (TX): A man was killed outside a multiplex over an argument about the ending of 300: Rise of an Empire

A man who argued with two other movie goers about the ending of a film was struck outside the cinema by a truck driven by his adversaries and killed, the Harris County Sheriff’s Office said on Monday.

The men’s discussion of the film grew more heated as the three left the theater and went to the parking lot after the late Sunday evening film. Two of the men then got into a pickup truck.

“The driver of the truck put the vehicle in reverse striking the victim and knocking him to the ground,” it said. The truck then sped away.  LINK

Israel: The new multiplex in Jerusalem has to stay closed on Saturdays (Shabbos), at least for now, the country’s Supreme court has ruled.

In its ruling on Sunday, the Supreme Court ruled that the Jerusalem municipality should renegotiate the contract with Cinema City and allow the city council to vote on it.

The Cinema City complex, with 15 theaters and some 50 restaurants and shops, opened last month in central Jerusalem.

Russia: It has been a good year at the Russian box office thanks to the strength of domestic titles Wii and Stalingrad.

The Russian audience is showing a rising interest in domestically produced movies, according to the recently reported data. Last year, new Russian films were attended by every sixth spectator; in other words, about 17% of the audience in Russia watched domestic films. In 2012, this figure was two times lower. In addition, recently released horror movie Wii set a new record in its first weekend, surpassing the box office of the first weekend of Avatar.

The most successful film of the year was Stalingrad by Fedor Bondarchuk, which became the absolute box-office champion among domestic films with grosses of US$67 million. According to the official statistics, only two films had bigger grosses: Avatar and the fourth part of the Pirates of the Caribbean franchise.  LINK

This year, 95% of the 2,500 Festival screenings and those at the European Film Market were digital. Not surprisingly, the technical crew found “distributing the films with their ever-larger data volumes [to be] one of the greatest challenges.” Thankfully, “seven enterprises are supporting the Berlinale this year in the field,” the press office relayed, namely Colt, EMC, Barco, Dolby, Doremi, DVS and VIDI.

Fiber-optic cable specialist Colt connected all the permanent screening venues with a bandwidth of 75 Gbit/s and, for the first time, provided its colocation services, which enabled the operation of the high-performance storage system supplied by EMC (with a storage cluster capacity of 400 TB). To transcode the films that were submitted in very diverse formats into DCPs, DVS supplied several Clipster post-production workstations while VIDI operated an HD-SDI transmission system with four channels “to ensure that the required HD video signals were transferred losslessly.”  LINK 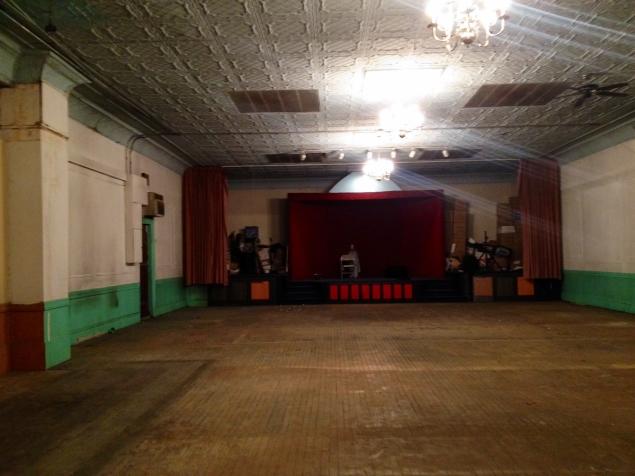 USA (NY): The Little Italy in Bronx could be getting an art-centre that includes a cinema. Rockethub.com is being used to raise $25,000 to start the campaign.

A Bronx nonprofit has mounted a push to transform a historic banquet hall in Little Italy into an arts haven.

USA (MA): An art-house cinema just outside Boston launches US $48,000 Kickstarter campaign to buy digital equipment, with the help of a little Hollywood star power.

Academy Award-winning actor and Kingston boy Chris Cooper will be at Plimoth Plantation on April 5 for a screening of last year’s Oscar-nominated film “August: Osage County.” Afterward, Cooper will participate in an exclusive meet-and-greet and question-and-answer session to raise money for projection equipment at the Plimoth Cinema in Plymouth.  LINK

Canada: The church are not the bad guys in the takeover of the cinema in Cloverdale.

As for movies, [Pastor Lee] Francois said they are definitely interested in showing movies at the Clova but whether that would be digital or traditional film would still have to be figured out.

“We’ve talked about Christmastime, maybe running a classic movie and doing it by donation with all proceeds going to the food bank or going to something (that would be) a local boost to the community,” he said.

Finally, when asked about some of the comments made on Facebook and Twitter accusing the church of “shutting down the Clova,” Francois said the comments were unfortunate, as the church likely prolonged the life of the struggling cinema.  LINK

India: Cinemas in Andhra Pradesh are closing at an alarming rate and being turned into apartments.

Blame it on rising operational costs, changing lifestyles or real estate boom, many single-screen theatres in Vijayawada are paving way to marriage halls, residential apartments and commercial complexes. In tune with the changing contours of the city, couple of multiplexes have already come up and two more are in the offing.

In the past, there were close to 60 single-screen theatres here, and the number has come down to 48. While theatres like Urvasi and Shanthi have been upgraded to multiplexes, rest of them like Kanakadurga, Venkateswara, Vijaya, Radha, Jyoti and Mohandas are either transformed into function halls, godowns, apartments or demolished.  LINK

Cineworld has released a cute bit of infographics on cinemas then and now, as a means of a plug for D-Box. Check it out in it full length in this LINK 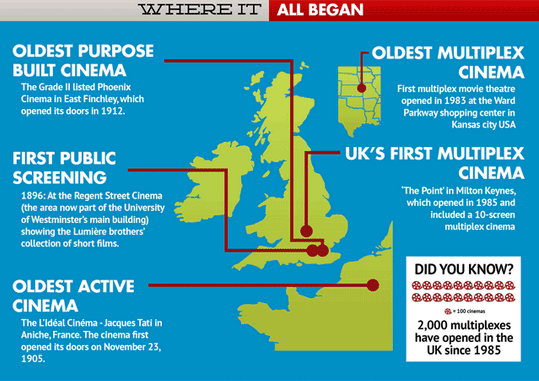