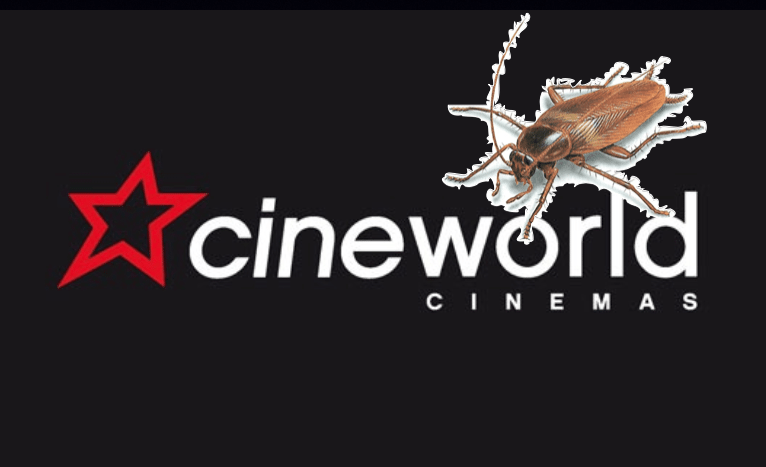 UK: Cineworld Didsbury near Manchester has allegedly had some particularly unwelcome visitors recently: cockroaches. More worryingly, some staff claim the cinema is hushing up the issue:

The M.E.N. [Manchester Evening News] was alerted by a concerned member of staff, who said cockroaches had been a long-standing problem.

“The cinema hasn’t closed once. Cockroaches have been seen in the food area and the bar. I have seen them crawling in a sink. It is absolutely disgusting and we have to work in it.”

The cinema wouldn’t comment on claims that its staff were told to keep the outbreak under wraps.

Apparently it is not the first time that pest control has been called in to the 11-screen multiplex, though the cinema’s management claim to be on top of the situation, as quoted in M.E.N.:

They said they are ‘confident’ the outbreak is fully under control and would be ‘resolved shortly’.

Bosses said health and safety was of ‘utmost importance’.

Manchester city council said it was informed by the cinema of a ‘low-level infestation’ last October.

Cineworld Didsbury contains licensed bars, perfect as a breakout space for meetings or a drinks reception to round off the day. Our professional caterers can provide anything from pastries on arrival to a full hot buffet, and we can offer fantastic corporate deals on refreshments.

Let’s hope the cleaning staff and routines are equally up to scratch. . LINK

UK: Cineworld hasn’t had the best of quarters, with profits dragged down by the merger with Picturehouse (more on that in the next item).

Revenue rose 13.2 percent to 406.1 million pounds at the only listed cinema chain in the UK.  LINK

UK: Cineworld has had to sell one of its cinemas in Aberdeen over competition issues related to the Picturehouse Cinemas takeover:

But today, Aberdeen City Council once again announced that the Belmont Cinema would be taken over by new bosses.

Centre for the Moving Image (CMI) are the parent company of the Edinburgh-based Filmhouse cinema and will begin operating the Belmont from the start of next month.

The move comes after Cineworld, who own the Picturehouse Cinemas group, were forced to sell one of their Aberdeen properties by the Competition Commission.

An Aberdeen City Council spokesperson said: “We can confirm that The Centre for the Moving Image, which manages the Filmhouse in Edinburgh and the Edinburgh International Film Festival, has been selected as the preferred bidder for the operation of the Belmont Media Centre.  LINK

UK: An independent cinema in Norfolk is abolishing its Monday promotion (GBP £3) and instead cutting the prices on all shows to just GBP £4.

Film fans will soon be able to see the latest screenings at a reduced price – thanks to Lynn’s Majestic Cinema’s bid to support businesses by bringing crowds back to the town centre.

Cutting the standard price of tickets by more than a third, the team are hoping to encourage more to venture into the town centre to watch the latest releases on the big screen.

Manager Tom Cundy said: “We want to offer a price that is affordable to everyone, we think our prices are already good but now we want to encourage more people to come back to the town centre.

An interesting and bold experiment. One that we will track. LINK

Oman: A fascinating glimpse into what works in cinemas in Muscat, be it Hollywood or Bollywood, Blockbuster or Oscar winning art-house film. There’s not much in a way of a local film industry.

So the box-office bottom line in Oman remains a Bollywood flick and only a Hollywood film with a Bollywood flavour or one that can lure the family crowd finds favour on the big screen. The rest are all consumed on the small screen, from DVD to watching on your computer screen.

“This is the reason Bollywood movie Dhoom 3 was a blockbuster in Oman multiplexes,” he opined.
A popular DVD lending library at Ruwi backs this view.

“The DVDs of 12 Years a Slave and Gravity have been booked every day this month. The demand is growing ever since Oscar nominations were announced,” he said. LINK

Infor-mation Minister R Roshan Baig who took a dig at multiplexes for charging exorbitant rates in January has softened his stand after reviewing a report submitted by the multiplexes.

“The moment the news spread about multiplex ticket rating, I was apprised by various multiplexes here who brought in a list from across India,” he said. According to him, Tamil Nadu, which has an uniform pricing structure in place, has only a couple of mutliplexes and no new multiplexes are coming up because of the ticket pricing.  LINK

UK: London will get its own drive-in cinema this summer at Alexandra Palace (AllyPally) and they will show – you guessed it – Grease. Twice.

From 31 March to 11 April, the clever people behind Rooftop Cinema will transform the Pavilion Car Park at Alexandra Palace into a drive-in cinema, the only one in London. Complete with waiter service snack menu, it’s the ultimate lazy night out at the flicks.

We’re sensing a vaguely automobile-esque theme, with films on show including Rush and Fast & Furious 6. If you’re not an action film fan, quell your inner romantic with About Time, or laugh it all off at Anchorman 2.

Grease is shown not once, but twice, as it’s bound to be popular. We’re wondering how many re-enactments of that stretch-yawn-reach scene will take place. Corny move or perfect disguise? You decide.  LINK

By comparison, this summer’s pop-up drive-ins in Essex and Dublin will give Grease a paltry single screening each. Sheesh…

UK: For those bored stiff of LVT’s Nymphomaniac, why not burlesque in front of the screen instead.

On Saturday, a seductive shimmering selection of scantily clad darlings will be gracing the Westway Cinema stage as Lux De Ville presents An Evening Of Burlesque bringing a sumptuous slice of the Moulin Rouge to Frome.

Weaving the evening all together with her outrageous comedy will be Muriel Lavender, the poetrix with the frilliest knickers and, oddly, the longest beard in the country.  LINK

India: The Indian Supreme Court has upheld the conviction for the owners of a cinema that was the scene of one of the greatest ever losses of life in the exhibition industry:

The Supreme Court on Wednesday held real estate barons Sushil and Gopal Ansal guilty in the 1997 Uphaar cinema tragedy that claimed the lives of 59 people and said they were more interested in making money than ensuring safety in their cinema halls.

A two-judge Bench, however, disagreed over the quantum of punishment to be given to them and the issue has been referred to a three-judge Bench to pronounce a final verdict on it.

USA: One of the leading digital cinema software and consulting companies will be showing off its new tools, not at CinemaCon but NAB.

UAE: More details on a new Dubai cinema development called The Beach, which will include an open-air beach cinema:

Imagine sitting on the beach sipping your favourite beverage while you marvel at Leonardo DiCaprio’s brilliant turn in The Wolf of Wall Street.

Well you can now do that right here in Dubai at Jumeirah Beach Residence (JBR), where The Beach project promises to rev things up in the already bustling community. LINK

Just expect it to be a shorter by a 45 minutes as The Wolf of Wall Street was heavily edited for its release in the Middle East. Detail on the rest of the developments include:

Emaar Retail, a subsidiary of Dubai developer Emaar, has announced plans to open and manage a 10-screen Reel Cinemas complex at The Beach, a new mall being developed by Meraas Holding in Dubai Marina.

The agreement follows the announcement of a recent joint venture by Emaar Properties and Meraas Holding to develop Dubai Hills Estate, the first phase of the Mohammed Bin Rashid City (MBR City).

The cinema at ‘The Beach’, which is located at Dubai Marina shoreline, can host over 800 people, and will feature three Platinum Movie Suites, a Platinum Lounge with a dedicated kitchen and seven standard screens, Emaar said in a statement. LINK

USA: It is not just in Europe where cinemas enjoy public support and funding.

The City Council Tuesday night voted unanimously to give $75,000 to a nonprofit organization that runs a movie theater in downtown Iowa City.

In The Guardian’s on-going Cine-files series, the turn has come to the Carlton Cinema in Westgate-on-Sea.

Opened in 1910 this Swiss-Gothic style building was originally intended to serve as Westgate’s town hall. In 1912 it became the Town Hall Cinema and was renamed the Carlton in 1932. It is a magnificent Grade II listed building and the focal point of the town. The main tower serves as the entrance to the cinema and to reach the lobby you have to walk through the archway onto a beautifully tiled floor. One of my favourite things about the building is the understated red neon outside. LINK