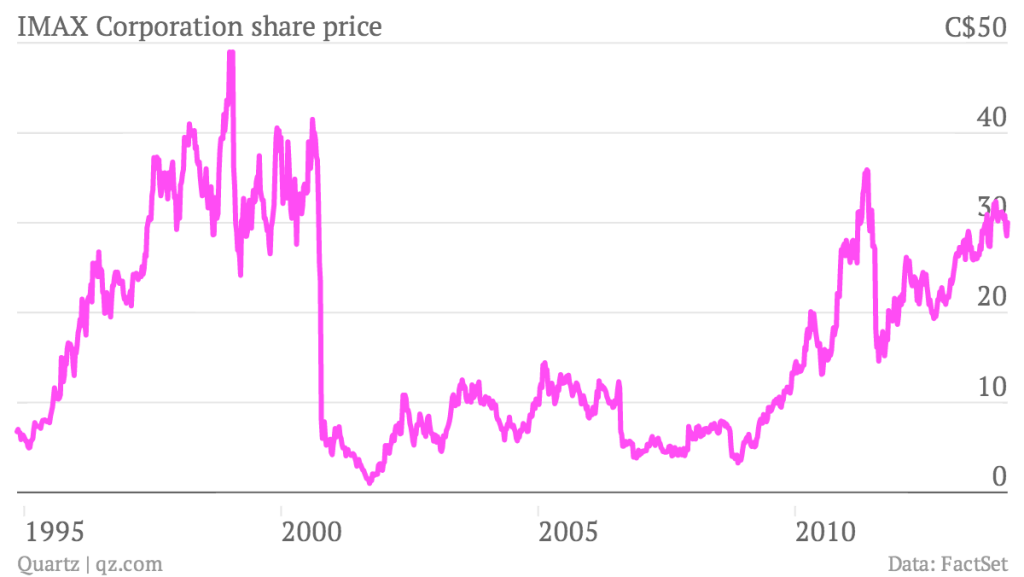 Who doesn’t wish that they had bought IMAX stocks in 2001? Back then the once-great large format film company had been reduced to a penny stock on the back of US cinemas filing for Chapter 11 bankruptcy protection to get out of expenses leases and also costly contracts with IMAX. Digital was just over the horizon and even the vaunted Digital Media Remastering (DMR) up-converting technology had yet to make a dent and give it access to first-run films ( re-release of “Apollo 13” was the first DMR title).

Yesterday the shares jumped to over $27 on the NYS ( C$30 on TSE) on the back of one of the companies best quarters ever. It might not quite have reached the heady heights of the late 1990s, but it is still a good time cash in for anyone who bought cheap. The question now is, can the good times last?

IMAX’s revenue increased from $77.4m to $105m, while profit more than doubled to $27.8m for the last quarter of 2013, compared with a profit of $12.8m a year earlier.  Analyst firm Piper Jaffray rightly described it as a “blockbuster” fourth-quarter results. The revenue was primarily driven by three titles: “Gravity”, “The Hobbit: the Desolation of Smaug” and “Stalingrad”, the latter of which did well in Russia and Europe ahead of its US release in February. IMAX also got good at being brutal in 2013, by yanking under-performing titles like “After Earth”, “The Lone Ranger” and “Ender’s Game” off their screens after just one week.

It is revenue from films that forms the largest component of IMAX’s earnings these days. As noted by Variety:

Imax said it earned $244 million worldwide during the period, its highest global box office quarter. It earned $727 million during the year.

It averaged $366,300 per screen during the fourth quarter.

“Gravity,” alone, generated around $100 million for the company. Film has earned over $700 million worldwide for Warner Bros.

Given the large-screen spectacle nature of “Gravity”, “Stalingrad” and “Hobbit” it should come as no surprise, but it is still a seizable figure. Other earnings also grew compared to (Q4 2012), but were smaller overall:

The more interesting and important figure is the number of new screens. From THR:

During the latest quarter, Imax signed contracts for 119 theater systems and installed 58, of which four were upgrades of existing venues. That brought the full-year total of installations to 112 new theater systems across 23 countries.

The most important growth has come in territories such as China, South Korea and India. As told in a separate piece for THR:

“I don’t think you’re going to see another 120-theater deal like we had with Wanda. That’s not going to happen,” Imax CEO Richard Gelfond told analysts Thursday after the release of his company’s fourth-quarter results.

IMAX is thus keen to play down expectations that the good news will roll for ever. The question is whether there are major challenges ahead. Gelfond was upfront about the problems faced in China. Although the previous quota increase benefitted IMAX, the expected additional increase has not happened.

It is also likely that not all IMAX titles will pass the Chinese censors in 2014 and the problems of getting the right type of Chinese blockbusters onto the largest of screens still remains. While IMAX has had an easier time getting Russian epics like “Stalingrad” or Bollywood blockbusters such as “Dhoom 3” released around the world, getting Chinese films onto Chinese IMAX screens represents the greatest potential and pitfall for IMAX. But that’s not all.

IMAX vs. CFGS in China

Worse, though, is Hollywood films appearing on rival large-format screens in China. As reported by The New York Times:

Imax, whose huge screens will play a 2-D version of “RoboCop” starting on Feb. 12 in the United States, has a wary eye on the Chinese market, where the same film will open 16 days later, in 3-D, on a competing set of large screens.

That will happen with the support of a powerful government-owned company, the China Film Group, which both controls the import of films to China and oversees the competing large-screen system. The issue is especially sensitive for Imax: Not only could competitors in China cut into its potential market share there, but Imax has charged in several courts that the Chinese system relies on technology that was blatantly stolen from its offices in Canada.

IMAX has been trying to negotiate the issue quietly, but the issue has blown up in the open with the release of the RoboCop 3D version. As told by THR, “Imax has also been impacted by a lawsuit with a Chinese competitor, China Film Giant Screen, which has a former Imax employee that allegedly brought his new employer stolen IP related to film conversions to 3D.”

The details could have been lifted from a high-tech spy thriller. According to the same NYT article:

Imax’s misappropriation claims are centered on Gary Tsui, a former Imax software engineer who is accused of taking the company’s technology and using it to found or provide engineering help to low-cost Chinese rivals.

Those include China Film Giant Screen, which was co-developed by the China Film Group and will play “RoboCop” on its large-format screens in China, following its conversion to 3-D by a company called Beijing Cubic Pictures Technology. Mr. Tsui has been identified by Imax as the chief engineer for the C.F.G.S. system, which Imax says was developed from its technology, and as having founded Cubic Pictures after supposedly misappropriating Imax’s 2-D to 3-D conversion methods.

Mr Tsui (also known as Xiaoyu Cui) vigorously denies the allegations and stated, “I’m a former Imax employee being scapegoated when the company chooses not to face competitive environment, ever-changing technology, and the dislikes of market monopoly and itself.”

This echoes industry resentment that goes back a long time, such as IMAX blocking studios from using outside vendors to up-convert films for IMAX, forcing them to use the DMR process, as well as complaints from exhibitors about being dictated to over what they can and cannot show on their IMAX screens. This and the terms of contracts is what has prompted many exhibitors to set up their own large-format screens, though with mixed results.

However, with the CFGS system deployed on 50 screens by the end of 2013 and CFG effectively owned and controlled by the Chinese government, any victory IMAX may see in courts could prove Pyrrhic. There is likely to be anger that Sony and MGM effectively broke ranks by taking a gamble on CFGS. Just how angry we will see when it comes to IMAX playing “Spider-Man 2” this summer, but Sony may have been smarting from IMAX pulling After Earth after just one week. The real worry is that other Hollywood studios will follow and CFGS will start pushing its large format solution abroad.

Expect more marketing momentum in the U.S. to bolster the Imax brand with theater owners considering its current contracts with chains start coming up for renewal in 2017.

However, the flip-side is that the exhibitors may also choose not to renew their contracts. 2017 will coincide with the wider availability of laser projectors that will allow for bright large-screen 3D images, coupled with more affordable immersive sound solutions from Dolby, Barco and possible others.

It is also important to remember that surefire winners in this space can see their fortunes quickly crumble as their technology becomes commoditized and copied, as noted by the Wall Street Journal:

Hollywood’s fourth quarter saw many of the top-grossing films of the year, but it was a different ending for another third-party film company. RealD Inc., the top 3-D technology company, posted a net loss of $271,000 earlier this month. The outer-space special effects of “Gravity” compelled most moviegoers to opt for 3-D screenings of the Alfonso Cuaron film, but the firm has failed to find its footing after a steady overall decline in consumer interest in the 3-D format.

IMAX has a stronger brand than RealD, but that in itself is no guarantee of survival. Expect IMAX to also have a good fourth quarter in 2014 on the back of Christopher Nolan’s Interstellar, but after that it is a journey into the unknown.