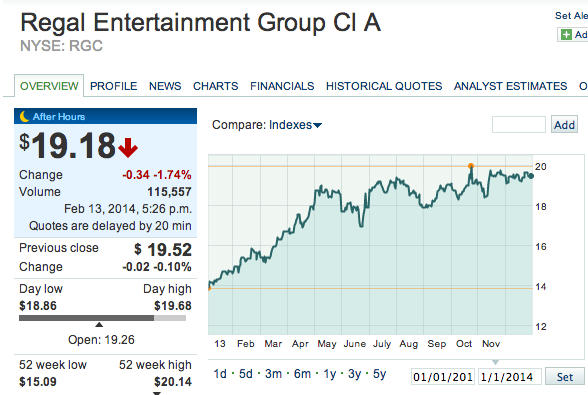 It may seem paradoxical, but while 2013 was a bad year for films in terms of growth, it was an excellent year for cinemas. Even with a strong summer at the box office, 2013 was flat or even down compared to the previous year in most western countries. Only emerging markets like China showed strong and significant growth on the back of their multiplex expansions.

It would seem logical that this trend would be reflected in the share price of listed exhibitors, but analysis by CelluloidJunkie.com has found that major exhibitors in the four largest English-speaking territories (USA, Canada, UK and Australia) had one of their best years ever in terms of share price. We will examine this, as well as looking at the possible causes and outlook.

We first have to preface the analysis by noting that it is difficult to make a completely accurate like-for-like comparison. While the majority of the largest exhibitors in the US and Canada are publicly traded (Regal, Cinemark and Cineplex are, while AMC is privately owned by China’s Dalian Wanda Group), the same is not the case in UK, where only one of the Big Three is listed (Cinemaworld; Odeon-UCI and Vue are privately held), whereas in Australia the multiplex chains are privately owned (Hoyts) or have complicated joint ownership or subsidiary status (Village and Greater Union/Event Cinemas).

Even so, it is still possible to get a good idea of how markets value exhibitors and why 2013 was a good year for them, as we will see.

2013 was a flat year in terms of box office growth. Statistics from BoxOfficeMojo tell us that overall gross was $10.925 billion, compared to $10.823 billion the previous year. While up by $100m year-on-year, this “growth” is effectively cancelled out by inflation. The underlying ticket sales are likely to show a decline when the official statistics are published by the MPAA. Projecting an annualized rate The Numbers sees attendance fall from 1.36bn to 1.19bn between 2012 and 2103.

This decline is in-line with what was predicted ahead of CinemaCon last year. Reported in Deadline:

“Bond analysis firm Fitch Ratings forecasts a “modest” decline in 2013 ticket sales and long-term challenges that should “cause concern” for lenders. Studios will find it “difficult to replicate” the success they had last year with hits including The Avengers and The Dark Knight Rises, analysts Shawn Gannon, Rolando Larrondo and Mike Simonton conclude. In addition the 3D market is “starting to mature.””

Regal Cinemas went from strength to strength as the share price rose from just under $14 per share in January 2013 to close to $20 per share at the start of 2014, before slipping down closer to $19 recently. 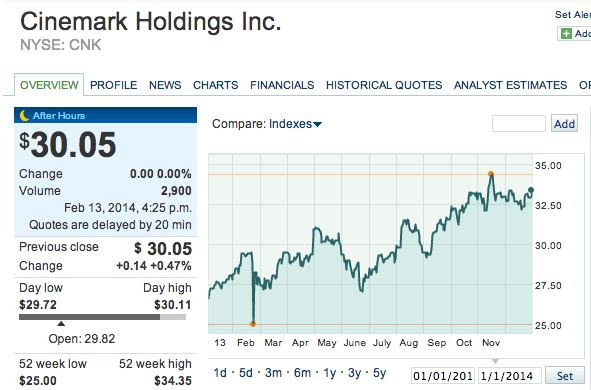 Meanwhile competitor Cinemark started the year below $27 and ended it above $33, before currently landing just above $30. Not as strong as Regal’s growth, but still significant. 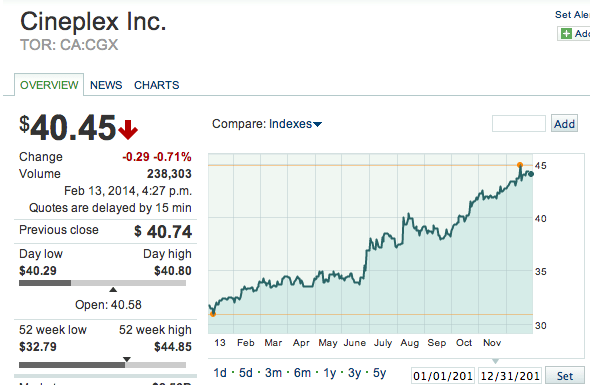 North of the border, Cineplex pulled off the most impressive stock market feat of them all by increasing from C$32 to coming within a whisker of C$45 before declining to just over C$40.

The filmgoing patterns in UK and Australia were worse than in North America for 2013. Despite being the third year that ticket sales crossed £1bn, UK box office revenue fell by one per cent on the previous year, while attendance dropped a significant 12 per cent to 165.5m ticket, mainly due to no hit that compared with 2012’s Skyfall, according to the BBC.

The situation was even worse in Australia, where according to Variety, “[c]umulative takings were A$1.099 billion, compared with A$1.125 billion in 2012. In local currency terms Australian box office has been on a plateau for the past four years with annual scores ranging from A$1.093 billion in 2011 to A$1.128 billion in 2010.” The fall in the value of the Australian dollar means that the two per cent dip worked out to a loss of a fifth when translated into US dollars.

So did the share price head south for cinemas, same as it had for banks in the UK and mining companies in Australia? Quite the opposite.

Cineworld’s shares grew from around £235 in January 2013 to over £340 by the time champagne corks popped on New Year’s Eve, having earlier hit an all-time-high of £394 on the back of the City Screen acquisition. Regulators forced them to sell of quite a few screens, which dampened the share euphoria. 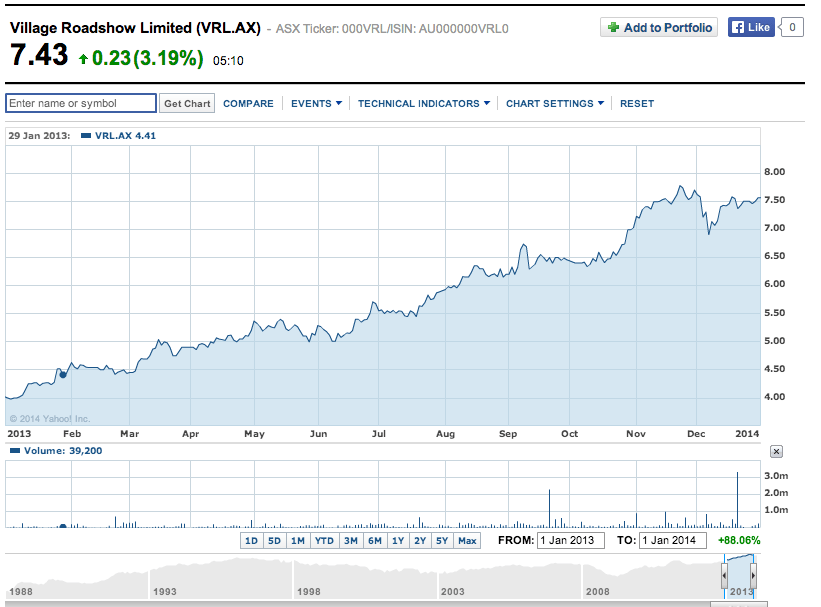 It is more difficult to estimate the value of Australian cinemas, as the activity is bundled with others in the JV and partner company Village Roadshow. Given that disclaimer we can still note the VRL.AX shares grew from A$4 at the start of 2013 to over A$7.50 at the end of the year, with cinemas playing a significant role in nearly doubling the value of the company.

Reasons for the Rally

Even though the above mentioned exhibitors’ share price have declined in the first two months of 2014, they are still historically high. How do we explain this gravity-defying performance, when compared with the plateau or stagnation in the underlying box office and cinema attendance?

We offer a few thoughts below.

1) POST-DIGITAL – 2013 was the year that most large cinema chains completed the transition to digital. This mean that the financial uncertainty surrounding the funding of new equipment – paid for largely by the Hollywood studio’s long-term VPF deals – now resolved and with any legacy 35mm projector and platter investment written off. There were also associated cost savings in terms of getting rid of projectionists. Markets respond positively to companies that go through major technology transitions that prepares them for the future and removes doubt. Digitisation also helped with…

2) DECOUPLING – Painfully aware of their fortunes being tied to the quality of the films that Hollywood produces, exhibitors have for many years been diversifying their revenue streams. Full digitisation meant that they could roll out event cinema to most of their locations. There was also the introduction alcohol sales and widening the choice at the concession counter, as well focusing on high-end cine-dining. Even if the blockbusters fail to perform, exhibitors have embraced the telecom and cable TV companies mantra of growing ARPU (average revenue per users), which in turn brings us to: 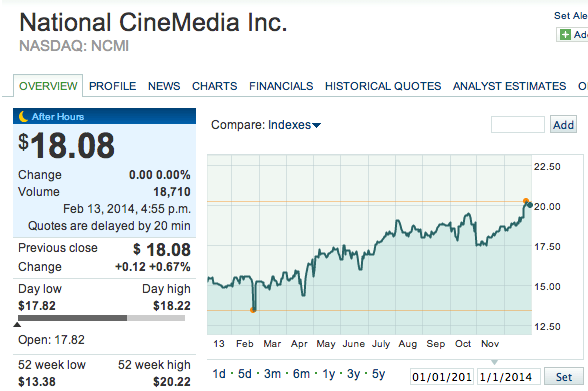 3) ADVERTISING – Taking advantage of digitisation, cinema advertising continues to re-invent itself and demonstrates growth that outpaces not just box office takings but in many cases rival advertising sectors as well. This is exemplified by stand-alone companies such as National CineMedia, which saw a growth to match that of former parent companies Regal and Cinemark in gaining from $15 to $20 in 2013. In Australia Val Morgan delivered a 40 per cent growth in underlying revenue in the last two years in an advertising market that was essentially flat.

4) BIG SCREEN BUCKS – Cinemas were not alone in seeing a share price rally in 2013, with both Dolby and Imax seeing a 27 per cent jump in their share price, though RealD suffered a 25 per cent drop. Films like Avengers and Gravity pulled in audiences paying a premium to see the films in Imax or Atmos, so despite the supposed 3D backlash in2013, there was still an appreciation for big screens (including in-house Imax-alternatives) and immersive audio (including Barco’s Auro);

5) EXPANSION – There was plenty of expansion and acquisitions to make big exhibitors even larger. Cineworld’s Central and East European merger took place in early 2014, but in 2013 it got a boost from buying art-house chain City Screen, even though it has been forced to sell off some sites. In the US Cinemark bought up both the smaller domestic rival Rave Cinemas for $240m, but it was above all active in Latin America, which is seen as having major future growth potential. Regal and Village may have been more quiet in 2013, but given other deals, such as Wanda-AMC and Vue-Multikino, it is clear that the exhibition industry is both consolidating and growing.

6) ALL BOATS RISE… – 2013 was an overall good year for stock markets in the West. With money being pulled out of emerging markets, monetary easing measures from the Feds in full swing and a new-found sense of optimism after the financial upheavals since 2008, cinemas were not alone in seeing their share price tick up and up. While some stocks were down, notably mining, these were ones that were seen as exposed to emerging market where economic uncertainty clouded prospects.

Analysts have been quick to note the positive underlying fundamentals. The Street rated Cinemark as BUY;

We rate CINEMARK HOLDINGS INC (CNK) a BUY. This is driven by some important positives, which we believe should have a greater impact than any weaknesses, and should give investors a better performance opportunity than most stocks we cover. The company’s strengths can be seen in multiple areas, such as its revenue growth, growth in earnings per share, increase in net income, largely solid financial position with reasonable debt levels by most measures and notable return on equity.

It went on to give detailed reasons, citing growth above the industry average, significant earnings per share improvement, net income growth that exceeded S&P 500, a relatively low debt-to-equity ratio and a growth in return on equity. Gurufocus went further, proclaiming “Why Cinemark Is An Underestimated Profit Investment” and concluding “with the company trading at a 9% relative to the industry average of 22.4x, I feel bullish about future profit opportunities.”

Past Performance Is No Guarantee…

So is now the time to buy into cinema stocks? CelluloidJunkie is not an investment advisor, sticking as it does to the two maxims of “buy low, sell high” and “never invest more than you can afford to lose.” Given this disclaimer, you should not take the performance over the past year as an indicator of what is to come in 2014. Remember that all of the above have seen a slight dip at the start of 2014 and there is no guarantee that this year’s crop of films will be any better than last year’s.

In conclusion, though, there is a less tangible feeling that cinemas have morphed into a solid, if perhaps un-exciting, bricks-and-mortar business. It’s been shown that unlike other businesses that are under threat from online alternatives, whether they are Amazon, Airbnb or Uber, the likes of Netflix will not deliver a killer blow to cinemas. Just like television, VHS and tablets, cinemas have again-and-again survived new competitors for leisure hour and dollars by re-inventing themselves around their core business – showing films.

With digitization completed, cinemas face the future on a more equal footing with other technology platforms. This is why not just shares rise, but savvy fund managers like Ontario Municipal Employees Retirement System (OMERS) Private Equity and Alberta Investment Management Co. (AIMCo) bought Vue Entertainment last year. Municipal workers in Canada’s largest province do not want flashy stocks in their pension pot but solid earners that grow slowly but steadily over time. So who are we to argue with retired Mounties?