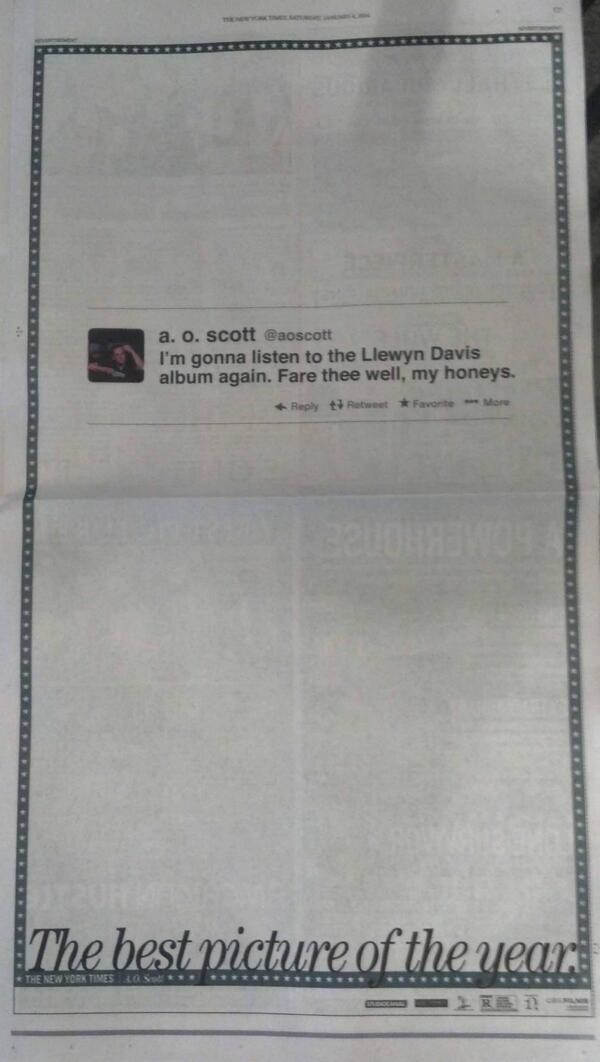 Using Twitter, Facebook, Tumblr and Instagram to advertise and promote a new or upcoming film release isn’t exactly a new concept. Distributors have been incorporating social media campaigns as part of their marketing efforts for the past several years now. However, most attempts at building awareness via social media have been learning experiences and results have varied widely. In other words, not all distributors are capable of exploiting social media to its fullest.

CBS Films, on the other hand, has proven over the past few days that they have mastered the art of marketing via social media.

On Saturday, January 4th, CBS placed a full page advertisement in the New York Times for their current release, “Inside Llewyn Davis”, the latest Coen Brothers film. That, in and of itself, isn’t so unique, but rather it was the content of the ad which caught everyone’s attention: a single Twitter post (also known as a tweet) from New York Times film critic A.O. Scott.

The ad placement turned out to be a marketers dream come true, as it soon went viral with countless mentions on Twitter, Facebook and photo replications showing up on Instagram. Then there were all the journalists who posted stories about the ad on their respective blogs. What CBS managed to do is brilliantly intermingle promotional mediums creating the ultimate self-reflexive marketing Mobius; a traditional newspaper advertisement featuring a Twitter post which people then reference in their own tweets and blog posts.

Granted, part of the reason for the ad getting so much attention was the “controversy” over whether 1) using A.O. Scott’s tweet without his permission was against Twitter’s terms of service and 2) whether it was ethical to edit the content of the original tweet which read.

You all keep fighting about Wolf of Wall St. and Am Hustle. I’m gonna listen to the Llewyn Davis album again. Fare thee well, my honeys.

The tweet as published in the ad removed the first sentence, which referenced “The Wolf of Wall Street” and “American Hustle”, two films that are competing with “Inside Llewyn Davis” for top honors during the current awards’ season. In yet another example that there is no such thing as bad publicity, the debate only served to expand the reach of the original ad in the Times well beyond the newspaper.

And in a turn of events that couldn’t be more meta, Scott himself used Twitter to comment on his tweet being used in the ad, setting off another chain of Facebook and blog posts:

we have reached a strange new place in marketing when tweets become full-page print ads.

That kind of user generated buzz is hard to orchestrate, however remarkably CBS was able to top themselves on Monday, January 6th with an advertisement stretching across two full pages in the New York Times arts section. This time CBS spent a lot more money on ink, thanking over 400 writers, critics and bloggers who selected “Inside Llewyn Davis” as one of the best films of the year in their coverage. Each journalist was listed in the ad individually alongside the name of their media outlet. What makes this such a genius move, albeit a highly manipulative one, is that it was highly likely a majority of those listed would turn to social media to brag about their appearance in the ad.

In fact, I first became aware of the ad through a dozen or so Instagram photos like this one from Eugene Hernandez from the Film Society of Lincoln Center:

Or this one from Alex Billington of First Showing:

Without a doubt, one of the funniest comments about the “Thank You” ad came courtesy of entertainment journalist James Rocchi:

The sad part is, Rocchi is probably right.