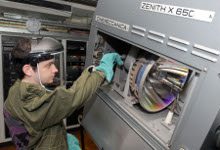 -Thinking of searching your cinema patrons bags for camcorders? You could end up like a somewhat indiscreet Canadian cinema owner who was ordered to pay C$10,000 in damages to a woman and her daughter for violating their privacy. From CTV.ca, “Security guards didn’t find any video equipment in the family’s bags, but did turn up a large selection of snack food, which they asked the family to take back to their vehicle, Lurie said. “They did so willingly. But they continued the search of the bags and while searching they also uncovered some birth control pills belonging to the older daughter,” Lurie said.” Needless to say, this proved a bit of a surprise to the mother, who promptly sued Cinemas Guzzo in Montreal. Mr Guzzo, VP of the cinema says searches of patrtons bags will continue, but “I don’t want to put my hands in your bag. In fact, leave the bags in the car.“”;

– BECTU, UK’s Media and Entertainment labour union, has launched a study of how the future will impact cinema technicians. The unions website lists a set of ‘Future challenges’:

These are important questions and it is good to see BECTU taking this up at an early stage. Hopefully in addition to the Cinema Exhibitors Association and to the BKSTS, BECTU will also co-ordinating it with other public efforts in the UK, such as those of Skillset, in the digital field;

– NEC is touting its new high brightness projector ahead of this weekend’s US release of Pixar’s “Up.” The NEC NC2500S-A 2K digital cinema projector will be used at New York’s Ziegfeld Theatre, according to the press release, which goes on to say that it, “allows 3D content to utilize the full 2K resolution of the 1.2” DMD from Texas Instruments using triple flash technology for smooth motion. With an increase in resolution and brightness of up to 33 percent, compared to previous generations, the boost in performance means a greater viewing experience for theatergoers.” NEC is offering this upgrade “free” to all pre-existing customers, presumably meaning that they will swap out older projectors.. NEC wishes to make it clear that it is NOT offering this upgrade “free” and that it is a parts upgrade, not a complete swap of the projector;

– Active 3D eye-wear company XpanD is supplying its glasses to Spanish exhibitor Yelmo. From the press release, “Yelmo Cines, which has a prominent presence with 370 screens and growing, a driving annual attendance over 12 million and a leading position, will continue to help drive the digital expansion by installing 29 XpanD 3D screens in 2009, six which are already operating.” Technically, XpanD is not installing ‘screens’ as you can move the glasses and IR transmitters between any auditoriums in a multiplex. Interestingly no mention of Arts Alliance, who had previously trumpeted how they were helping expand Yelmo’s digital capabilities for 3D. What’s the Spanish word for ungratefull?;

– Despite the economic downturn in Gulf state cities like Dubai, the multiplex boom continues according to Khaleeji Times. “Watching movies is going to get a lot better with The Dubai Mall all set to open the Reel Cinemas, one of UAE’s largest cinema complexes featuring 22 screens and a seating capacity for 2,800 people. The highlight of the cineplex is the introduction of the Hollywood Chic design concept, which ensures a modern ?cinema experience.” It will also feature the first dedicated art-house halls in a Dubai multiplex, called Platinum Movie Suites. The company is a joint venture established between Cathay Organisation Singapore and Emaar Malls Group Dubai in 2007;

– Possibly stung by the decision of AMC and Regal Cinema to go with Sony’s 4K projectors, Christie Digital has put out a press release announcing that “Independent exhibitors continue to embrace proven Christie DLP Cinema® projectors.” Upon closer reading the press release turns out to be about Christie’s work with dealers and re-sellers for the 2K projectors to offer “more customizable programs that provide marketing and sales support, technical advice and expertise, maintain spare parts inventory, and deliver a streamlined RMA process which resolves issues quickly and speeds up the advanced warranty replacement process.” It then goes on to list several testimonials. All true and important, but no doubt Christie would have preferred to put out a press release with the name ‘Regal’ or ‘AMC’ in it, rather than ‘Classic Cinemas’ and ‘Essex Cinemas’, fine independent exhibitors though these may be;

– Growth in 3D and large format (LF) cinemas is what is driving Ballantyne of Omaha’s expansion of its cinema screen manufacturing capacity at its Canadian Strong/MDI Screen Systems subsidiary, according to this press release. “The expansion effort, which began in the latter half of 2008 and will continue through 2009, is focused on expanding plant capacity and productivity, as well as improving production methods to further enhance screen quality.” The expansion wil tripple capacity. It goes without saying that it is great news in these tough times to see an industry and company expanding instead of laying of people or asking for bail outs; 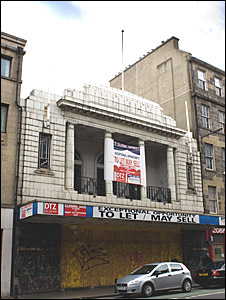 – Two historic cinema buildings in Scotland’s two principal cities, Edinburgh and Glasgow, face demolition. The razing of Clerk Street’s Odeon Cinema (pictures right) has been given the go ahead by Edinburgh’s City Council, but “Proposals to demolish the auditorium of an historic cinema in Edinburgh are “not justified”, according to a report commissioned by Historic Scotland,” reports BBC News. Meanwhile, The Scotsman reports that, “a historic former cinema in Glasgow is facing demolition after fire ripped through it in the early hours of yesterday morning…The Coliseum had fallen into disrepair and was on the Register for Scotland Buildings at Risk list. Originally a theatre, it opened in 1905 and was based on the now demolished Ardwick Empire in Manchester, and seated almost 3,000 people.” It was the first cinema in Glasgow to show ‘talking pictures’, but like all-too-many UK cinemas only survived as a bingo hall in its last 15 yearts of existance.