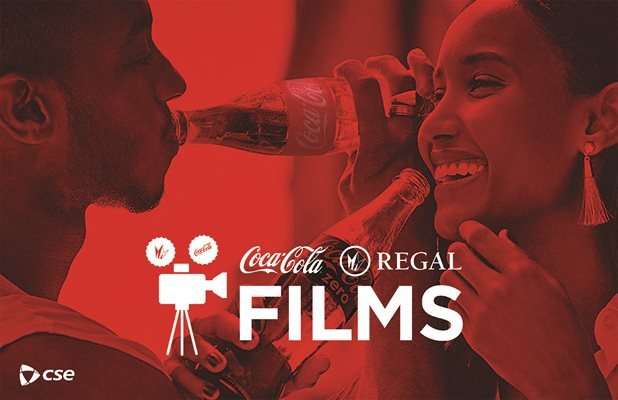 Regal Entertainment Group, a leading motion picture exhibitor owning and operating one of the largest theatre circuits in the United States, along with Coca-Cola announce the return of the premiere student film program in the country.  The Coca-Cola and Regal Films program invites aspiring, up-and-coming filmmakers from 29 top university and college film schools across the country to participate.

The Coca-Cola and Regal Films program is a six-month initiative providing students with hands-on experience managing all aspects of filmmaking. From developing scripts and managing the creative process to casting and production, student finalists ultimately will create a 35-second film about the special movie-going experience using RED Digital Cinema cameras. The program also gives students the opportunity to work alongside marketing and creative teams at The Coca-Cola Company, Regal Cinemas and RED Digital Cinema.”In partnership with Coca-Cola, we are excited to offer this once-in-a-lifetime opportunity to young filmmakers,” said Ken Thewes, Chief Marketing Officer for Regal Entertainment Group. “The Coca-Cola and Regal Films Competition provides hands-on cinematography experience to talented students, and we are impressed every year by the creativity each team exhibits. This competition opens the door to greater career opportunities for many of our entrants, and we look forward to kicking off another great year of the program.”Coca-Cola and Regal teams will select up to five finalists who each will receive $15,000 and the opportunity to shoot on a complete RED Digital Cinema camera kit to produce a 35-second film. A Red Ribbon panel comprised of entertainment industry experts, Coca-Cola, Regal, and RED representatives will choose the 2018 grand prize winner, who will be announced at the CinemaCon conference in April 2018. The grand prize-winning team will have their film played on thousands of Regal Cinemas screens across the country and win a RED RAVEN Camera Kit.

Coca-Cola and Regal Films’ 2017 grand prize winners were Tom Teller and Julian Conner from Chapman University. Their film “Crunch Time” is currently playing at Regal theatres nationwide. Winning the program was a stepping stone in their on-going passion for filmmaking. Since graduating from Chapman University, they have formed Frame 48, a full-service production house based in Southern California.

“Every student with an interest in filmmaking should participate in the Coca-Cola and Regal Films competition. From working with supportive corporate partners to hands-on learning with RED Digital Cinema’s state-of-the-art equipment, we now hold new perspectives and a great appreciation for the commercial world,” said Julian Conner, winner of the Coca-Cola and Regal Films program 2017. “Thanks to this experience, I’ve been able to take the lessons learned and put them to use at our own production company, Frame 48. We loved our time in this program, and now continue to make branded content full time.”

The next time you go to a Regal theater, the trailer you see before your film starts just might have been made by students.

Along with “Crunch Time”, Regal is proud to announce that both runners-up films will also receive screen time. “Coca-Cola Gaze” from AFI Conservatory’s Jane Hollon (Producer) and Mia Niebruegge (Writer/Director) and “Just In Time” a film from UCLA’s Golden Zhao (Cinematographer) and Stephen Heleker (Writer/Producer) will both be featured this fall at Regal Cinemas.

About The Coca-Cola Company:
The Coca-Cola Company (NYSE: KO) is the world’s largest beverage company, refreshing consumers with more than 500 sparkling and still brands and nearly 3,900 beverage choices. Led by Coca-Cola, one of the world’s most valuable and recognizable brands, our company’s portfolio features 21 billion-dollar brands, 19 of which are available in reduced-, low- or no-calorie options. These brands include Diet Coke, Coca-Cola Zero, Fanta, Sprite, Dasani, vitaminwater, Powerade, Minute Maid, Simply, Del Valle, Georgia and Gold Peak. Through the world’s largest beverage distribution system, we are the No. 1 provider of both sparkling and still beverages. More than 1.9 billion servings of our beverages are enjoyed by consumers in more than 200 countries each day. With an enduring commitment to building sustainable communities, our company is focused on initiatives that reduce our environmental footprint, create a safe, inclusive work environment for our associates, and enhance the economic development of the communities where we operate. Together with our bottling partners, we rank among the world’s top 10 private employers with more than 700,000 system associates. For more information, visit Coca-Cola Journey at www.coca-colacompany.com, follow us on Twitter at twitter.com/CocaColaCo, visit our blog, Coca-Cola Unbottled, at www.coca-colablog.com or find us on LinkedIn at www.linkedin.com/company/the-coca-cola-company.

About Regal Entertainment Group:
Regal Entertainment Group (NYSE: RGC) operates one of the largest and most geographically diverse theatre circuits in the United States, consisting of 7,267 screens in 561 theatres in 42 states along with Guam, Saipan, American Samoa and the District of Columbia as of December 31, 2016. The Company operates theatres in 46 of the top 50 U.S. designated market areas. We believe that the size, reach and quality of the Company’s theatre circuit not only provide its patrons with a convenient and enjoyable movie-going experience, but is also an exceptional platform to realize economies of scale in theatre operations.