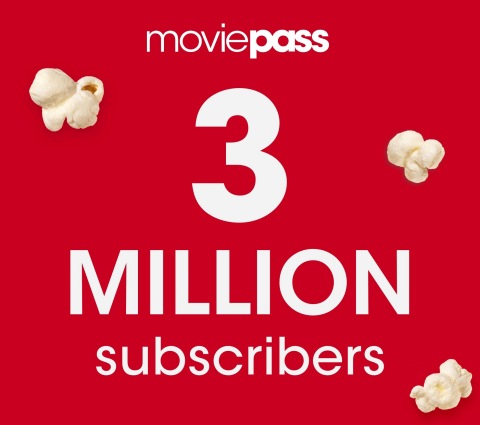 MoviePass, the nation’s premier movie theater subscription service and a majority-owned subsidiary of Helios and Matheson Analytics Inc. (“Helios”), announced today that it has exceeded 3 million paying subscribers since announcing its low-cost subscription plans in August 2017.

MoviePass’ rapid growth is within its projections that estimate the service will exceed 5 million paying subscribers by the end of 2018. MoviePass currently represents more than 5% of total U.S. box office receipts, with its peak weeks nearing 8% of box office. When actively advertising select films to its subscribers, box office receipts have seen weeks push to over 30%.

As a subsidiary of Helios, MoviePass has substantially driven Helios’ growing presence in the entertainment industry. Helios recently acquired Moviefone™, a multimedia information and advertising service, from Oath Inc., a Verizon company, which has enabled MoviePass to expand its advertising offerings. In addition, Helios’ subsidiary, MoviePass Ventures, has already acquired economic interests in films and teamed up with MoviePass to drive box office for those films, which Helios believes will maximize downstream revenue opportunities. Helios’ recent announcement of its deal to buy the film library and current production slate of Emmett Furla Oasis Films and its launch of MoviePass Films with veteran producers Randal Emmett and George Furla, further expands Helios’ ability to self-generate new revenue opportunities for MoviePass.

“With MoviePass Films and MoviePass Ventures under the Helios umbrella, we are continuously adding more perks and services for our MoviePass subscribers. Consistent growth in MoviePass subscribers means we can utilize our media companies in ways no one has seen before,” said Ted Farnsworth, Chairman and CEO of Helios. “With its considerable market share of moviegoers, MoviePass expects to influence its subscribers to engage with our other revenue channels throughout the entire film industry ecosystem.”

MoviePass Ventures acquired an economic interest in the critically acclaimed film “American Animals” with The Orchard, a film and music distribution company and a subsidiary of Sony Music Entertainment. The theater debut of “American Animals” represents one of the year’s most successful independent films, thanks, in part, to marketing efforts orchestrated by MoviePass and The Orchard. Additionally, MoviePass Ventures holds an economic interest in the John Travolta film, “Gotti,” premiering this Thursday in New York City.

“MoviePass is moving quickly and decisively on a course to continue innovating the film industry from the ground up and delivering audiences for films and films for audiences,” said MoviePass CEO Mitch Lowe. “This is the eve of a transformative time in the movie industry. We are witnessing the dawn of a new Golden Age, where audiences, studios, and exhibitors are all connected, from top to bottom — all in the interest of diversifying the movie-going palate and demonstrating the success of smaller, independent titles.”

About Helios and Matheson Analytics

MoviePass Inc. (“MoviePass”) is a marketing technology platform enhancing the exploration of film and the moviegoing experience. As the nation’s premier movie-theater subscription service, MoviePass provides film enthusiasts the ability to attend up to one new movie title per day in theaters. The service, now accepted at more than 91% of theaters across the United States, is the nation’s largest theater network. Visit us at moviepass.com.