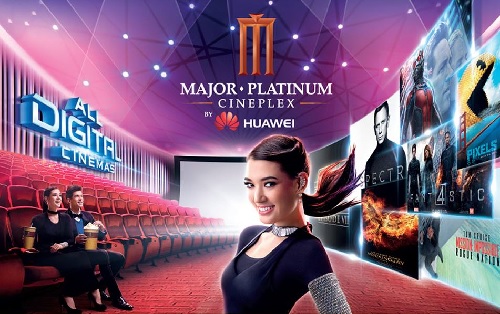 Major Cineplex Group PCL under the lead of Mr. Vicha Poonworaluk, CEO of Major Group, has agree the deal to rent the space, from Lao World PCL., for opening the new branch at ITECC Mall, top influential retail in Laos, had officially signed the contract upon the opening of the new Major Cineplex theatre in ITECC Mall with over 4,000 Sq. m. in area located on 5th floor. The new theatre is fully furnished with four digital screens, compacted 1,000 seats along with the sponsorship from 10 leading companies in alliance, targeted 200 million baht in revenue annually. It is estimated to be in service by October 2018.

In accordance with this recent join, Major Cineplex PLC. is considered to be the sole provider in theatre industry in Laos with ultimate 100% in market share, reassured the success from the previous two branches in Vientiane Center, Vientiane and Major Cineplex Pakse at Friendship Mall Pakse.

The recent market expansion remarks the success of Major Cineplex Group’s in the entertainment industry in Thailand’s neighboring countries. The grand opening of Major Cineplex, AEON Mall Sen Sok City in Phnom Penh, Cambodia brought the leading innovative technology of IMAX firstly in ASEAN other than Thailand. The new theatre in Aeon Mall Sen Sok City is ranked the forth in local country, where Major Cineplex Group owns more than 60% of market share, considered to be the most influential theatre ever in Cambodia.

Major Group currently has 6 branches internationally, totaled 33 theatres; 4 branches in Cambodia for 24 theatres, and 2 branches in Laos for 9 theatres. The next step is the expansion through other neighboring countries; Myanmar and Vietnam in 2019.