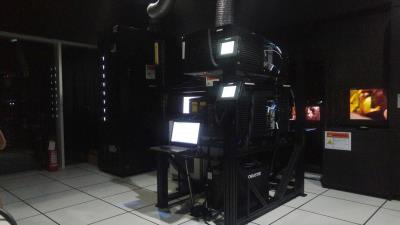 Located on the fifth floor of the famous Siam Paragon shopping mall in the heart of the city, Paragon Cineplex comprises 16 screens and 5,000 seats, and is well-known as Thailand’s largest cineplex. The projection system will be fitted in Siam Pavalai theater, Thailand’s single, grandest theater equipped with 23-meter screen and 1,096-seat capacity, making it an ideal venue for the deployment of the Christie RGB laser projection system.

With this installation, Major Cineplex will be the first exhibitor in Thailand to deploy Christie’s pinnacle RGB laser projection system.

“We are proud to be the first exhibitor in Thailand to offer this brand new cinema technology for our guests to enjoy a movie experience like no other,” said Vicha Poolvaraluk, Chairman of Major Cineplex group. “Over the years, we pride ourselves in creating the best movie-going experience to our patrons. By introducing Christie’s cutting-edge RGB laser projector to our flagship multiplex, we are taking the immersive cinema experience to the next level and I’m sure our customers will appreciate what’s in store for them.”

The CP42LH produces a color gamut that exceeds the DCI P3 color spec and replicates the Rec. 2020 space, making it the most advanced RGB laser cinema projection system available on the market. It consists of rack-mounted laser modules where each module can produce up to 5,000 lumens of white light. Because of the scalability of this platform, up to 12 laser modules can be easily added, removed, activated or disabled depending on brightness requirements. This provides up to 60,000 lumens per rack. Each laser module is also independently cooled, providing built-in fault protection, improved efficiency and reliability.

Han Kim, General Manager, Christie Singapore, said, “We’re very pleased that Major Cineplex, the largest cinema chain in Thailand, has placed its trust in our award-winning RGB laser projection system, which has effectively demonstrated how 3D light levels, color fidelity, image uniformity, viewing comfort, and a sense of immersion can be greatly improved. The cinematic presentation delivered by our CP42LH with EWD in Paragon Cineplex will not only captivate movie-goers, but also provides confidence to cinema exhibitors in terms of performance and reliability.”

About Christie
Christie Digital Systems USA, Inc. is a global visual technologies company and is a wholly-owned subsidiary of Ushio, Inc., Japan, (JP:6925). Consistently setting the standards by being the first to market some of the world’s most advanced projectors and complete system displays, Christie is recognized as one of the most innovative visual technology companies in the world. From retail displays to Hollywood, mission critical command centers to classrooms and training simulators, Christie display solutions and projectors capture the attention of audiences around the world with dynamic and stunning images.

About Major Cineplex
Major Cineplex is the largest operator of movie theaters in Thailand. Combined with its subsidiary, EGV Entertainment, the company has 490 screens around Thailand. Among its properties is Thailand’s largest multiplex, the Paragon Cineplex at Siam Paragon, with 16 screens and 5,000 seats, along with the IMAX theater. For more information, go to: www.majorcineplex.com