Kinepolis is ‘Entrepreneur of the Year 2019’ 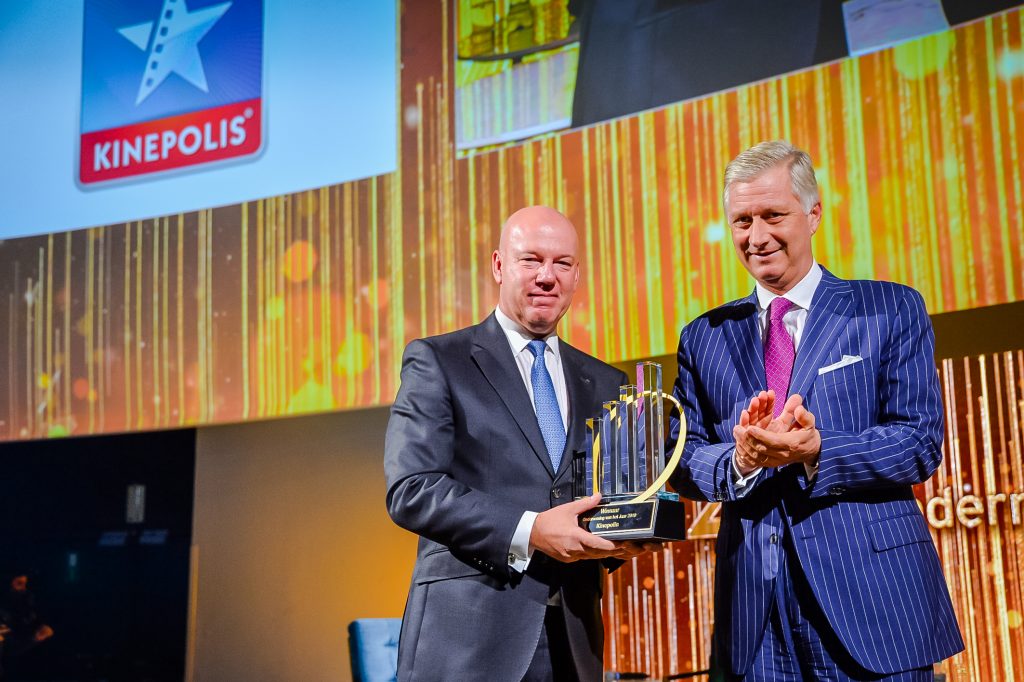 Yesterday, Kinepolis Group proudly received the ‘Entrepreneur of the Year 2019’ award for Flanders from His Majesty the King of Belgium. The 25th edition of this prestigious event, organised by EY in collaboration with Belgian newspaper De Tijd and BNP Paribas Fortis, took place in Auditorium 2000 at the Heysel in Brussels and was given an extra festive touch to celebrate this anniversary edition. EY launched the ‘Entrepreneur of the Year’ award in 1995 with the ambition to put the great achievements of Belgian companies in the limelight. The award and accompanying award ceremony have since grown into a fixed annual happening that attracts the top of the Belgian business community.

Other nominees for the award besides Kinepolis were Actief Interim, Aertssen and Torfs. The jury eventually chose Kinepolis as the winner because of the company’s impressive growth and financial results, its entrepreneurship and international development, innovation culture and good governance.

Eddy Duquenne, CEO Kinepolis Group: “This is a fantastic acknowledgement for the almost 5000 employees of Kinepolis who work in our 109 cinemas across Europe, Canada and the USA. Every day I see proud people who are passionate about their job and who always go the extra mile. We deeply appreciate this recognition, which will certainly motivate us to keep pushing our boundaries, to stay true to our business strategy and to innovate in order to offer our customers the ultimate movie experience time and time again.”

In Europe, Kinepolis Group NV has 54 cinemas spread across Belgium, the Netherlands, France, Spain, Luxembourg, Switzerland and Poland. Since the acquisition of the Canadian movie theatre group ‘Landmark Cinemas’ in December 2017 and including the recently announced acquisition of American movie theatre chain MJR, Kinepolis also operates 44 cinemas in Canada and 10 in the US.

In total, Kinepolis Group operates 109 cinemas worldwide, with a total of 1,065 screens and almost 200,000 seats. Kinepolis employs 4,600 people, all committed to giving millions of visitors an unforgettable movie experience. More information on www.kinepolis.com/corporate.