Kinepolis Responds Quickly and Decisively to the Crisis, and is Looking Forward to the Future with Confidence 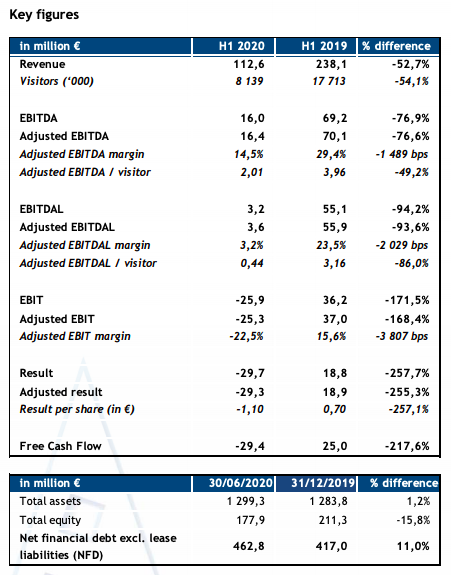 As is known, Kinepolis was forced to close all its cinemas from mid-March onwards following the Covid-19 outbreak. During the month of June, cinemas in several countries, namely in the Netherlands, Switzerland, Luxembourg, France, Spain, and some in Canada, were cautiously reopened, although with important capacity restrictions and other safety measures. As a result, the contribution of the second quarter to the results of the first half of the year was negative.

Up to the closing of the cinemas in all the countries where Kinepolis is active, the Group recorded an increase in visitors and financial results, partly due to its recent acquisitions.

The strategy and nature of the company, characterised by a maximum variability of costs, a solid real estate position, with a large proportion of cinema real estate owned, a self-learning organisation and a ‘facts and figures’-driven corporate culture, have helped Kinepolis to respond quickly and decisively to the current crisis.

Kinepolis has taken various measures in recent months with a view to protecting its customers, employees and the company in the light of the Covid-19 pandemic and the measures taken by the authorities.

Kinepolis entered the crisis with a strong cash position, and subsequently made every effort to adjust its costs as much as possible and in the very short term to the impact of the Covid-19 virus on its activities. The measures taken include a drastic scaling back of the number of active employees, thereby drawing on the support measures in each country, both in cinemas and at the support services level in the national and international headquarters. In addition, various measures were taken to limit the ‘cash out’, such as the decision not to pay a dividend for 2019, negotiations with suppliers and the owners of rented cinemas with a view to obtaining financial concessions as a result of the reduction or closure of the activities, as well as the maximum postponement of all investments, except for the new-build projects already in progress.

Eddy Duquenne, CEO of Kinepolis Group, regarding the first half of the year:
“I am proud of the determination and speed with which our teams have responded to the current crisis, making it possible for us to protect our customers, employees and the company to the best of our ability. Given the exceptional and challenging circumstances, we are continuing to closely monitor the cash position of our company, and the associated cost control is proceeding according to plan. This means that our Group will be able to cope with the Covid-19 impact for a considerable time to come. Considering the lack of new international film content and the drastic measures taken to protect public health – which are more drastic in some countries than others – we receive a rather limited, but nevertheless encouraging number of visitors this summer. Our customer survey also shows that moviegoers appreciate the measures we have taken and feel comfortable during their visit. This strengthens our confidence that we can quickly return to achieving results once the external conditions are favourable again.”