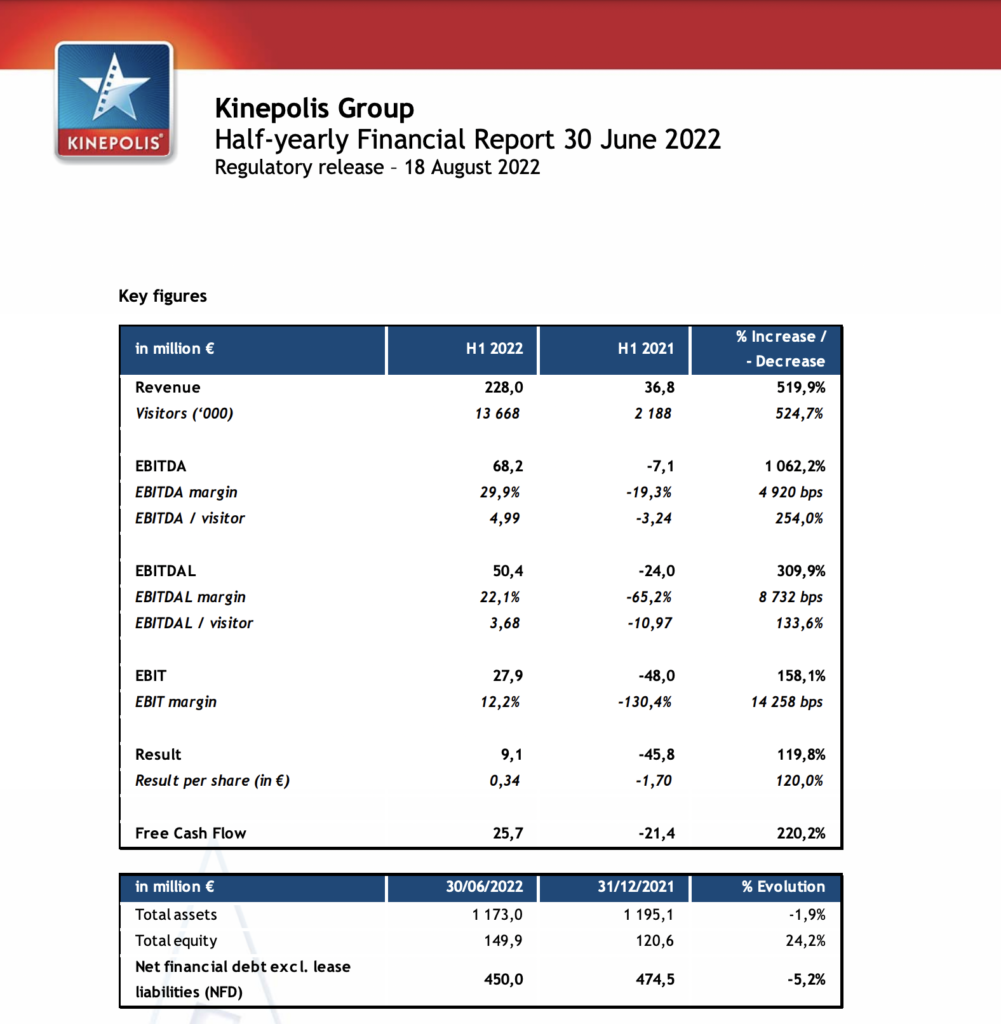 Kinepolis recorded a strong recovery in its operating result and free cash flow in the first half of 2022. The Group saw a progressive recovery in cinema attendance in all countries, with countries that initially lagged behind now catching up. The summer holiday started promisingly, but was then plagued by the heat wave.

Kinepolis welcomed five times more visitors in the first half of 2022 than in the first half of 2021, or 77.2% of visitors compared to the same period in 2019. While Covid measures were still in force in most countries in the first quarter, with the Dutch and some of the Canadian cinemas remaining closed until the end of January, all cinemas were free of measures in the second quarter. In the month of June, ‘Top Gun: Maverick’, ‘Jurassic World Dominion’ and ‘Elvis’ ensured a recovery in the number of visitors to 107.0% compared to June 2019.

Average sales per visitor remained high, driven by a high demand for experience and premium products, which has led to a faster recovery in visitor-related revenue compared to the visitors. The other business lines also recorded a smooth recovery, particularly business-to-business activities, thanks to a significant increase in corporate events.

The implementation of the Entrepreneurship plan contributed strongly to the recovery of the operating result and to the development of the product range. The regained financial strength will allow Kinepolis to focus further on external expansion and the premiumisation of its offering.

Appointment of Mr. Jeroen Mouton as the new CFO. He will start on 15 November 2022.

Agreement to take over the operation of two Spanish cinemas (Marbella and Barcelona) from November 2022.

Investments in a premium movie experience, including the introduction of ‘Premiere Seats’ in ten Landmark cinemas and 200 laser upgrades in 2022, as well as the preparation for the roll-out of premium concepts in the US.

Agreement for the roll-out of Eikona Cinema Manager TMS system in Europe.

Sales per visitor (ticket sales, drinks and snacks) remained high, and were higher than in 2021.

EBITDA in the first semester amounted to €68.2 million, with an EBITDAL (EBITDA adjusted for leases) of €50.4 million.

Eddy Duquenne, CEO of Kinepolis Group, about the first half of the year:
“I’m proud of the company’s financial recovery and the strength that we are regaining to focus on further internal and external expansion. Blockbusters are playing an important part in the recovery of cinema attendance, and we expect medium-sized and local films to also reach their full potential in the coming months. Our strategy of focusing on premiumisation of the customer experience has been successful and, together with the realisation of our Entrepreneurship plan, has contributed strongly to the recovery of our operating result.”

For the full report see here.

About Kinepolis
Kinepolis Group NV was formed in 1997 as a result of the merger of two family-run cinema groups and was listed on the stock exchange in 1998. Kinepolis offers an innovative cinema concept which serves as a pioneering model within the industry. In addition to its cinema business, the Group is also active in film distribution, event organisation, screen advertising and property management.

In Europe, Kinepolis Group NV will soon have 60 cinemas spread across Belgium, the Netherlands, France, Spain, Luxembourg, Switzerland and Poland. Since the acquisition of Canadian movie theatre ?group Landmark Cinemas and American movie theatre group MJR Digital Cinemas, Kinepolis also operates 40 cinemas in Canada and 10 in the US.

In total, Kinepolis Group will soon operate 110 cinemas worldwide, with a total of 1,117 screens and almost 200,000 seats. Kinepolis’ employees are all committed to giving millions of visitors an unforgettable movie experience. More information on www.kinepolis.com/corporate.