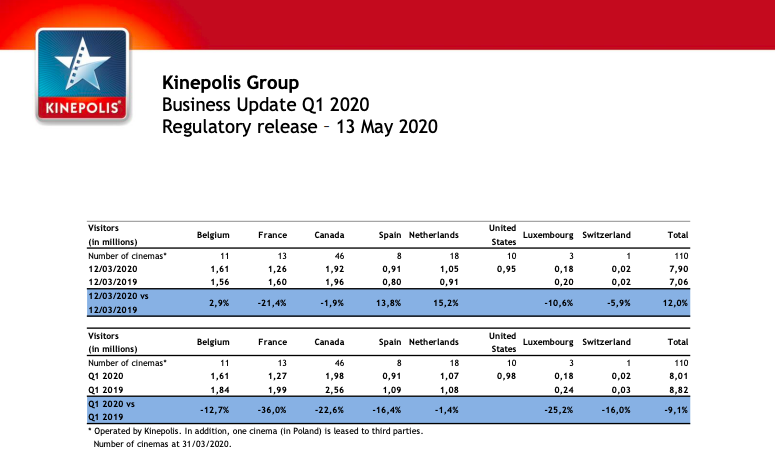 Business update Q1
Up until the closure of the cinemas due to the measures relating to the COVID-19 virus, in every country where Kinepolis is active, the Group recorded an increase in visitor numbers and financial results, partly as a result of its recent acquisitions. As known, Kinepolis was forced to close all cinemas from mid-March onwards following the COVID-19 outbreak. In this update on the results of the first quarter of 2020, we have therefore made a distinction between the results before and after the closure of the first cinemas:

Notes
Until the closure of the cinemas in mid-March, visitor numbers increased in Belgium (+2.9%), which enjoyed a favourable basis for comparison in relation to a rather weak first quarter of 2019, in Spain (+13.8%) and in the Netherlands (+15.2%). In Spain, this increase was mainly due to the integration of the El Punt cinemas from 1 March 2019. The expansion effect also played a role in the Netherlands, but even without expansion the visitor numbers remained stable in a market that declined overall. In France (-21.4%), Luxembourg (-10.6%) and Canada (-1.9%), visitor numbers suffered from a less successful film offering in the first months of 2020.

The top 5 of the first quarter of 2020 was made up of ‘Bad Boys for Life’, ‘1917’, ‘Sonic The Hedgehog’, ‘Star Wars: The Rise of Skywalker’ and ‘Jumanji: The Next Level’. The most successful local films in Flanders were ‘FC De Kampioenen 4’ and ‘Nachtwacht: Het Duistere Hart’, ‘Ducobu 3.0’ in France, ‘De beentjes van Sint Hildegard’ and ‘April, May en June’ in the Netherlands and ‘Adú’ in Spain.

The revenue from ticket, beverage and snack sales showed a stronger increase than the number of visitors, thanks to an increase in revenue per visitor in all countries, except in Spain due to the integration of El Punt starting from 1 March 2019. As far as Box Office revenue is concerned, the addition of the US activities had a negative impact on the group average, while revenue from In-theatre Sales (ITS) had a positive impact. Overall, revenue per visitor increased at Group level. Total revenue for the full first quarter decreased as a result of the closure of the cinemas, but less significantly than the decline in visitor numbers over the full quarter.

Revenue from B2B activities and screen advertising was strongly impacted by the COVID-19 virus, mainly due to a strong decrease in the number of events.

Revenue from real estate activities also decreased in the first quarter due to the loss of variable rental income.

COVID-19 impact and measures
From mid-March onwards, Kinepolis, in consultation with the relevant authorities, closed its cinemas in all the countries where the Group operates. The health of our film lovers and employees is our absolute priority. Depending on the duration of the closure in the different regions, Kinepolis expects a severe impact on the Group’s financial results in 2020. The concrete impact on an annual basis cannot be estimated at this stage.

The strategy and nature of the company, characterised by maximum cost variability, a solid real estate position, with a large proportion of cinema real estate owned, a decentralised organisation and a facts-and-figures driven corporate culture, help Kinepolis Group to manage this crisis optimally and contain its impact.

In recent weeks, measures have been taken to reduce the operating cost base and protect the company’s cash flow approximately 70% of the costs affecting EBITDA are variable. Thanks to the strategy adopted in recent years of thinking about revenue-enhancing and efficiency-driven measures at cinema and team level, there is detailed knowledge available at every level of the organisation about the cost structure and the measures to be taken to influence certain costs. This has enabled Kinepolis to take swift action in order to make even more costs variable, resulting in almost 80% of operating costs being variable at present. Naturally, the measures taken by the authorities in the various countries in which Kinepolis operates have also helped. Efforts were also made at management level, such as voluntary salary reductions or the postponement of its payment by executive and senior management, the reduction of fees for the Board of Directors and the postponed payment of bonuses for the year 2019, which was an excellent year. In addition, the Board of Directors has not made a proposal for dividend payment to the General Meeting but has proposed to transfer the profit to the ‘Retained earnings’ item.

Kinepolis will continue to take all measures necessary to further reduce the impact at all cost levels, including the fixed costs and outgoing cash flows. For example, all investments that were not urgent or to which no commitment had yet been made have been stopped. The ongoing investments in the new construction projects in Haarlem and ‘Mall of the Netherlands’ in Leidschendam are continuing as planned.

At the start of the COVID-19 pandemic, Kinepolis held almost € 70.0 million in liquid assets and a line of credit amounting to € 120.0 million. Thanks to the measures taken, Kinepolis has sufficient liquid assets to cope with this crisis. In recent years, Kinepolis has pursued a prudent financial policy. This has resulted in an average term of more than five years of the outstanding financial liabilities. The next major repayment of its bonds will not take place until 2022. Kinepolis also has a strong and healthy balance sheet with an important real estate portfolio.

Eddy Duquenne, CEO Kinepolis Group: “As management, we are convinced that we have taken every measure necessary to get us through this crisis. We are eager to open the doors of our cinemas again soon, offering visitors the ultimate movie experience, in a safe environment. To this end, we have developed a protocol for the protection of visitors and employees, and are consulting with the sector federations and local authorities. Cinemas offer close to-home entertainment in a controllable environment, and they are a way to expand the limited offer of leisure activities this summer.”

Opening of a ScreenX theatre in Antwerp
The first Belgian ScreenX theatre opened its doors in Antwerp at the beginning of February 2020. ScreenX is a multi-projection cinema technology, designed to take the cinema experience to the next level. The technology creates a 270-degree film experience by extending the scenes to the side walls of the theatre, allowing the audience to look beyond the frame of a traditional cinema screen.

Kinepolis free to open new cinemas in Belgium from August 2021
On 23 October 2019, the Brussels Court of Appeal annulled the ruling of the Belgian Competition Authority (BCA) of 25 March 2019 and decided to abolish the condition that prevents Kinepolis from growing organically in Belgium. The Competition Authority determined the transitional period on 11 February 2020, and ruled that Kinepolis would no longer require prior permission to open new cinema complexes in its home market from 12 August 2021.

Line-up
Due to the closure of the cinemas, there is currently no programming. Upcoming highlights confirmed for this summer include ‘Mulan’, ‘Tenet’ and ‘Wonder Woman 2’. As in previous years, the alternative programme features opera and ballet performances, as well as art exhibitions, concerts and other cultural events.

About Kinepolis
Kinepolis Group NV was formed in 1997 as a result of the merger of two family-run cinema groups and was listed on the stock exchange in 1998. Kinepolis offers an innovative cinema concept which serves as a pioneering model within the industry. In addition to its cinema business, the Group is also active in film distribution, event organization, screen publicity and property management. In Europe, Kinepolis Group NV has 55 cinemas spread across Belgium, the Netherlands, France, Spain, Luxembourg, Switzerland and Poland. Since the acquisition of Canadian movie theatre group Landmark Cinemas and American movie theatre group MJR, Kinepolis also operates 46 cinemas in Canada and 10 in the US.