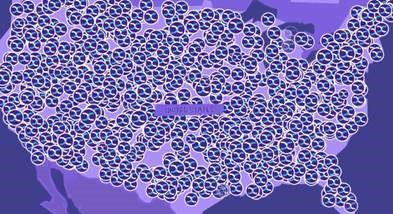 DCDC has delivered over 1,000 features (including 163 versions) and more than 150 events and special content to theaters totaling over 1 million deliveries since its launch in 2013 through 2017. Of particular interest is the increase DCDC has experienced in events: 750% since its first year of operation. DCDC has also delivered 735,000 trailers over this same period.

Transponder usage has accordingly almost doubled as a result of the increased volume of content.

Randy Blotky, CEO of DCDC, said, “These numbers reflect the fulfillment of our initial pledge to not only protect the integrity of the content, but to also create a pioneering business model – one designed to accrue economic benefits equally to all, be realistic to achieve and compelling to both our exhibitor and content provider customers.”

DCDC now has nearly 2,900 locations and over 31,800 screens under contract after seeing the number of theaters in its network leap by double digits in each of the past three years, up from nearly 1,300 sites at launch in October 2013. Its exhibitor customer base is now comprised of:

To accommodate the growth and prepare for further advancements in content delivery technology, DCDC has added staff and expanded to new Century City quarters this past year.

The Network is designed to ensure audiences have the highest-quality entertainment experience, while exhibitors and content providers achieve a strategic, secure and cost-effective new distribution model. As digital electronic distribution replaces the use of traditional physical media for content distribution, users of the DCDC Network have access to a host of delivery options and resources.