Stockholm (April 7, 2021) – Cultpix.com launches today as the first truly global streaming service for classic genre and vintage cult films and television shows. The SVoD (subscription video-on-demand) platform brings together hundreds of classic feature films, shorts, loops, trailers and TV shows from founding company Klubb Super 8 together with over a dozen leading international distribution partners. It is currently available on an invitation-only basis, with a waiting list for wider access this summer.

Filling the gap between mainstream streaming services and more niche arthouse content providers, Cultpix taps into the rich legacy of genre films from before the year 1990. These films encompass horror, science fiction, thrillers, Mondo, shockumentaries, erotica and more genres, which often screened as B-features, before going on to have an afterlife at midnight screenings, VHS and obscure specialised cable television channels. Cultpix now offers these films in one place for a global audience.

“There’s been a significant gap in the streaming market for older genre films that don’t conform to the broad mainstream platforms’ profile and also fall short of more narrow arthouse appeal,” says Cultpix co-founder Patrick von Sychowski. “Our aim is to give fans of cult films a home where they can find their favourite movies, as well as discover a wide variety of other titles from our global catalogue.” Whether you are into American slasher films, Japanese Kaiju monster movies, Swedish nudie cuties, Italian sword and sandal epics or Spanish horror, Cultpix will have something for you. “We are not simply launching a streaming service for cult films,” adds co-founder Rickard Gramfors. “Our ambition is to create a global community for all genre films fans.”

Founded by Stockholm-based Klubb Super 8, which has collected and released close to 100 domestic cult classics on VHS, DVD and BluRay for almost twenty years, Cultpix brings together major genre distributors from around the world. These include the likes of America’s Something Weird Video, Synapse Films, AGFA (American Genre Film Archive), Japan’s Nikkatsu, Germany’s ARRI Media/Lola Film and others. (A full list of all partners can be found at the bottom.) Deals for more titles with other distributors are currently being negotiated and will be announced shortly, with more films added every week.

The Cultpix platform is available online and compatible with all browser-based interfaces. It is currently accessible on an invitation-only basis during the launch phase, for an annual fee of $49 for unlimited viewing. A waiting list is open for later this summer when Cultpix opens to a wider membership at $59 per year or $6.66 per month. The platform is available globally and without geoblocking in any country that does not practice online censorship (sorry, North Korea). Cultpix has lined up over 400 titles for launch and anticipates doubling this before the end of the year, given the number of content deals underway. Many of these titles are exclusive to any streaming platform. Cultpix is also launching a weekly podcast, newsletter and major social media online community for its members. 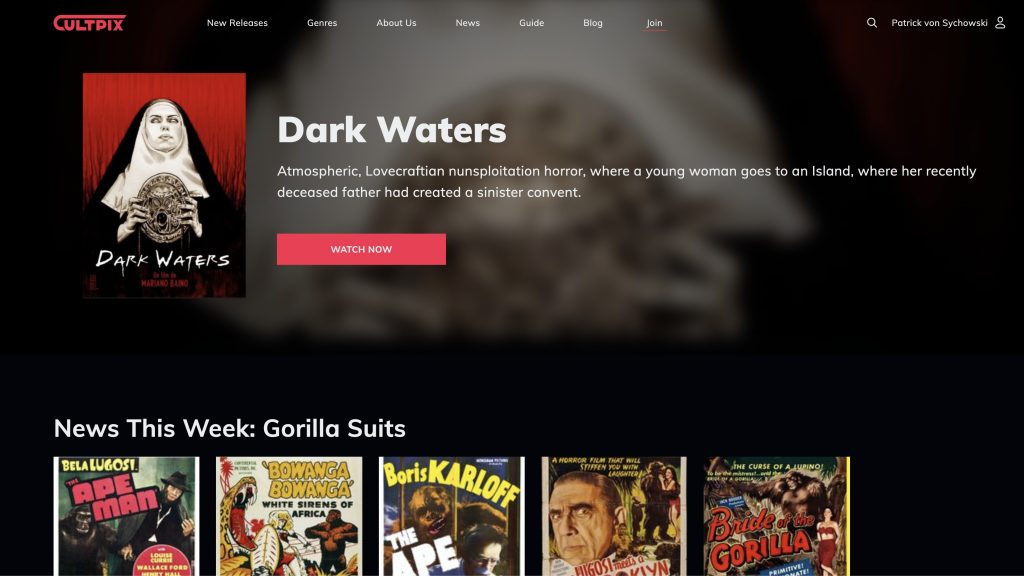