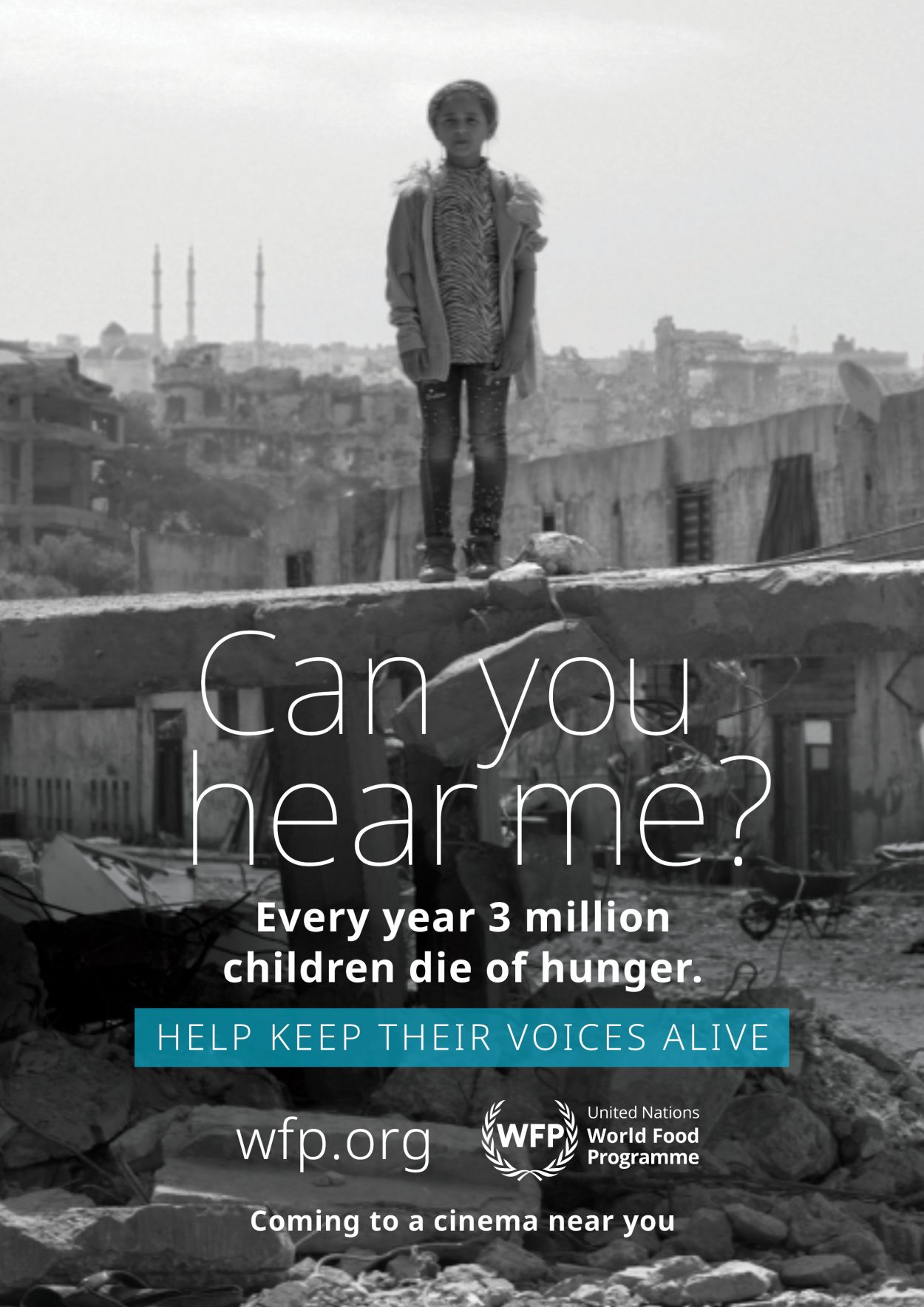 Digital Cinema Media (DCM) and Pearl & Dean lead the way to help keep the voice of millions of children alive.

Digital Cinema Media (DCM) and Pearl & Dean have today announced they are joining the next phase of “Feed our Future”, a global cinema ad campaign that shines a light on the United Nations World Food Programme’s (WFP) life-saving work on the frontlines of world hunger. Starting today, the advertisement will air as a long-term campaign on DCM and Pearl & Dean’s screens across the UK.

DCM and Pearl & Dean support the “Feed our Future” campaign as part of a unique partnership between SAWA, the Global Cinema Advertising Association, and WFP, which is the leading humanitarian agency fighting hunger worldwide.

Karen Stacey, CEO at DCM said: “For the fifth year, the cinema industry is supporting the work of the UN and its hugely ambitious programme to take on some of our planet’s biggest issues. The latest creative from Sir John Hegarty will make a powerful impact on the big screen, with the cinema environment offering a captivating space to engage audiences. We’re proud to be partners of the WFP through SAWA.”

Kathryn Jacob OBE, CEO at Pearl & Dean said: “The World Food Programme is using the incredible power of cinema to inform and engage people and, ultimately, create much-needed change in the world. Creating a unified and substantive response to this issue across the many countries taking part will ensure that more food reaches those in need. The emotional response cinema invokes is the perfect way to get this essential message across.”

The new campaign aims to build on last year’s results that helped to double awareness of WFP among those who saw the ad and raised more than half a million dollars through online giving or through a 38% increase in downloads of the agency’s Share the Meal donation App, globally.

“We have every reason to believe that this year, the Feed our Future campaign is going to take us even further in terms of raising WFP brand visibility and engaging a wider audience in the fight against global hunger,” said Corinne Woods, Chief Marketing Officer at WFP.  “We think that this year’s campaign is even more emotionally engaging and we expect more people will respond to our call.  In a world full of noise, cinema has proven incredibly effective for us at cutting through to not only establish our brand, but also to convert cinema goers into active supporters and donors.”

“The Cinema Medium makes the most of its space, creative and audience to deliver gripping content, showing consumers advertising at its very best,” said Cheryl Wannell, CEO of SAWA. “In 2020 the Cinema Medium is predicted to become the fastest-growing ad medium ahead of the internet. For brands like the World Food Programme who want to reach the hearts and minds of millennials, the immersive experience that Cinema gives is the most powerful of all storytelling mediums.”

The creative force behind the new advertisement is Sir John Hegarty, of The Garage SOHO, who has delivered a product designed to appeal directly to cinema audiences. The advert highlights the potential lost to the world when children’s voices are silenced due to hunger. The poignant narrative of the ad sees a group of Syrian refugee children who were selected from the local community playing in rubble and gazing out of bombed-out buildings in an apparent war zone. Softly, a small chorus of voices begins singing “How Can I Tell You” by Yusuf Islam/Cat Stevens. As the short film progresses, one by one these children disappear until only one voice remains — an unnerving conclusion that mirrors the harsh realities faced by the 3 million children around the world who lose their lives to hunger or malnutrition.

“Cinema is still the most amazing medium for any creative person to work in. A place for you to tell your story on the ‘mother of all screens’. It’s not surprising that it’s so important and continues to capture the public’s imagination”, said Sir John Hegarty.

For more information about the “Feed Our Future” advertisement and campaign, and to learn how to get involved in creating a world with Zero Hunger, please visit: www.wfp.org.