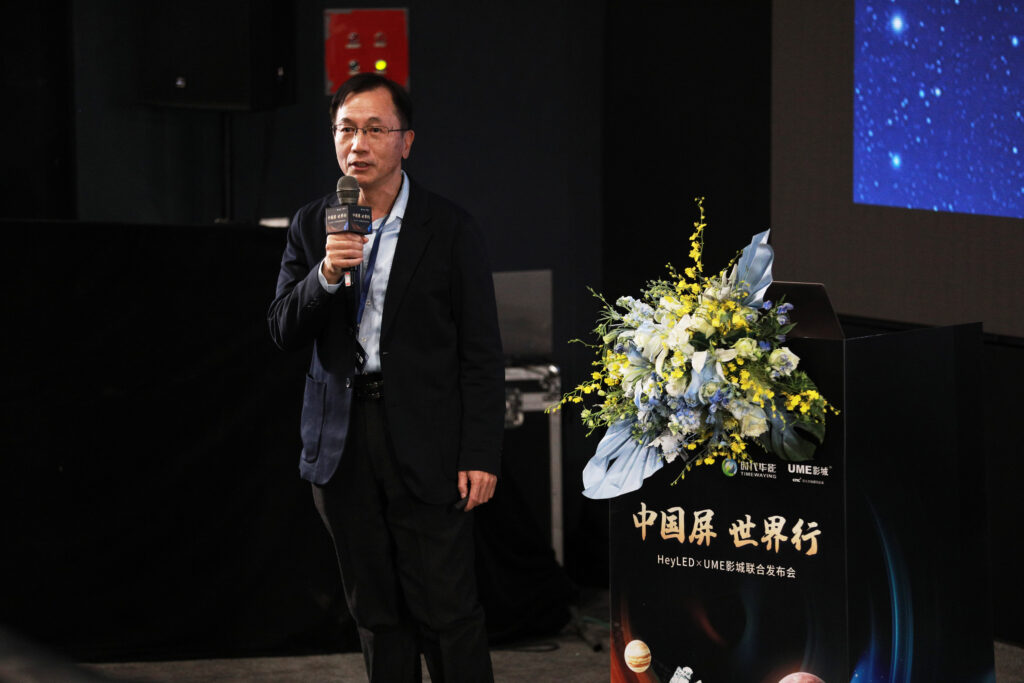 A groundbreaking LED cinema system was installed at a Beijing cinema on Dec. 29, 2021, demonstrating the future of cinema exhibition technology.

Shenzhen Timewaying Technology’s milestone LA2K-10 LED Cinema System, with the brand name HeyLED, has been installed at the Beijing UME International Cineplex. Development started in 2018 with the support of the China Research Institute of Film Science & Technology, and the LA2K-10 screen is their first LED product.

In the demonstration section at the event, an astronaut, a space-aircraft carrier, and meteorites burst out of the immersive 3D screen, wowing spectators.

For example, LED technology can revolutionize the cinema viewing experience because it delivers image on a genuinely black screen. Since the screen absorbs light from secondary-reflection rather than reflecting it, the intra-frame contrast ratio can be increased by more than 20 times of that achieved by older projection technologies, Chow explained.

Andrew Chan, CEO of Timewaying, said the specially-equipped theater will significantly improve moviegoers' experience, worth their tickets even when the price is a little higher than the average theaters, and nurture new consumption habit of consumers. He added the online streaming services and the COVID-19 pandemic in the current era have forced the industry to upgrade the cinema experience to attract more audiences to the theatrical venues.

In addition, the system can free up space for cinemas, as it will eliminate the projection room, which will create opportunities for more seats or a VIP balcony. In Chan's vision, HeyLED can also meet the needs of the high-end cinema market and generate revenue opportunities for other events such as conferences, eSports, live concerts, virtual reality events, and dine-in cinema.

But Chan admitted there is a lack of content specially made for showing off the full effect of the new screen as they are just getting started, and they need to discuss with filmmakers how they can create and make content for HeyLED.

Beijing UME is China's first cinema to install the system, China's first DCI-approved 10-meter-wide cinema screen with self developed and independent core technology intellectual properties in both software and hardware. More exhibitors in other cities are now discussing with Timewaying to launch more such specially powered theaters.

Meanwhile, the company also has a plan to launch HeyLED worldwide. It will install one screen in Los Angeles early this year for executives of Hollywood studios to experience. Furthermore, in April, it will promote the system at CinemaCon 2022 in Las Vegas and introduce the screen system to international markets.

UME International Cineplex
UME is the abbreviation of “Ultimate Movie Experience”, which is also the brand significant. It was established in Beijing in 2002, and has opened a new era for China’s multi-hall upmarket movie center with the grand opening of HuaXing UME. UME was wholly owned by CMC Inc. in 2017, which was founded in 2015 by Li Ruigang who was also the chairman, CEO. This acquisition poured the stronger cultural connotation and subsequent power of development into UME, which has steadily developed for 19 years and has gained impressive achievements. UME?a CMC Inc. company, has had 54 high quality cinemas operated by the end of 2021 in 25 cities throughout China.

About Timewaying
Founded in 2011, Timewaying was a leader in migrating 3D technology from active 3D glasses to passive glasses system. It has over 30,000 3D systems installed at 11,000 cinema sites across China. The company recently launched production of their NAMOS Nano Screen, which has an extinction ratio in excess of 1,000-to-1 in 3D and completely eliminates ghosting in 3D film viewing.

Timewaying obtained DCI certification in July 1st 2021. This DCI certification marks the latest achievement of Timewaying’s efforts in the cinema display market. With strong R&D capabilities, Timewaying contributes its own strength to improve the exhibition technology for the theater industry.