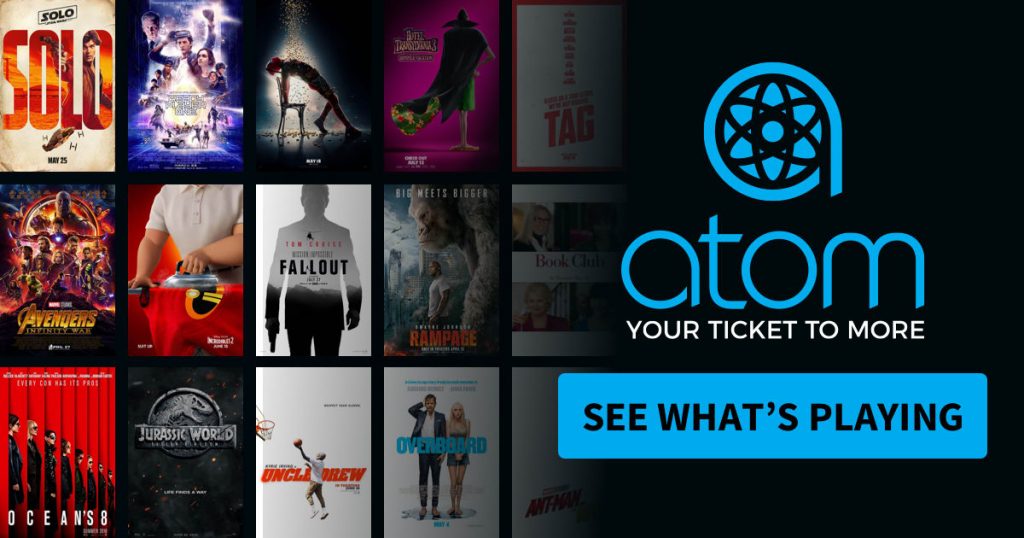 The new exhibitors add more than 1000 screens to Atom’s platform, bringing Atom’s total reach to over 20,000 screens of the highest volume across North America.

“Partnering with all of these phenomenal exhibitors from Harkins Theatres to New Vision Theatres is amazing validation that we’re providing a valuable service that makes going to the movies that much better and easier not only for theater owners but for movie fans as well,” said Matthew Bakal, Chairman and Co-Founder of Atom Tickets. “We’re thrilled to see the rapid adoption of Atom Tickets and are looking forward to all the innovative marketing and promotion efforts we’ll kick off to drive ticket sales to these theaters as they come on board.”

“Harkins Theatres has a rich legacy as a leader for superior programing, amenities and technology in the film exhibition industry,” said Racheal Wilson, Chief Operating Officer of Harkins Theatres. “We’re excited to partner with Atom Tickets as yet another way to provide the Ultimate Moviegoing experience for our guests.”

New Vision Theatres was established in 2017 as a leading movie theatre circuit of 17 locations across the U.S., with 194 screens. The new circuit is a diversified portfolio of theatres that focuses on first-run movies and offers a range of amenities, including IMAX, 3D, luxury seating, extensive food and beverage options, dine-in services, alternative content and cinema events.

Zyacorp’s Cinemagic Stadium Theaters is a family-owned and operated New England theater chain. Founded in 1998 by Mark Adam, Cinemagic’s family serves the communities of 3 states with 8 locations and 91 screens. Cinemagic Stadium Theaters offers its patrons an array of amenities; home to the only IMAX locations in New Hampshire and Maine, luxury seating, 3D, sensory & family friendly screenings and alternative content.

These exhibitors join an already impressive list of theater partners that includes AMC Theatres, Regal Cinemas, National Amusement’s Showcase Cinemas, and Southern Theatres among others. These recent partnerships are expected to be available to moviegoers in the coming months.