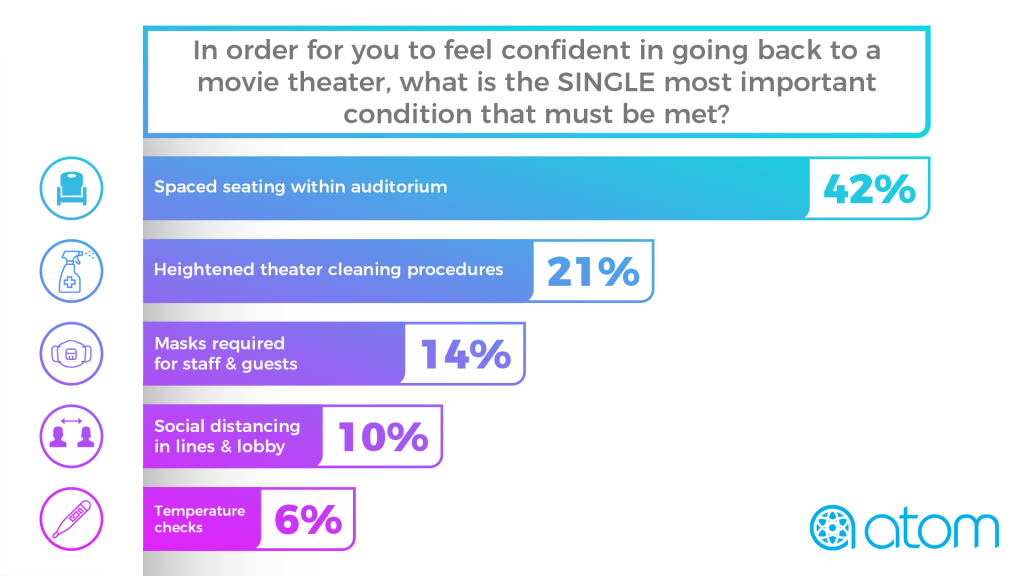 Since March 2020, movie theaters in the U.S. have been adjusting to mandated temporary closure due to federal and state government orders that were put in place to slow the spread of COVID-19. In turn, movie studios have rearranged their 2020 and 2021 movie slates to give their films the best shot at box office success.

When asked to identify the most important safety measure to make them feel confident about going back to a movie theater, having spaced seating in the theater auditorium was by far the most critical safety feature at 42.2% saying this was a key condition. The next most critical safety measure is heightened theater cleaning procedures at 21.14%, followed by staff and guests wearing masks at 14.36%. Only 6.41% of moviegoers said taking staff and guest temperature readings before screenings was the most important condition that must be met before they would feel comfortable returning.

The contactless trend that’s surging in the food and retail industries also appears to be top-of-mind for moviegoers. Over 77% said that purchasing digital tickets from their own device and eliminating the need to interact with a cashier is an important safety measure. Concessions may also look different in a post-COVID world, with customers leaning into ordering ahead and picking up their items instead of waiting in crowded lines and being served directly over the counter. Of those who have never pre-ordered movie theater concessions, 61% said they are now likely to try it.

“Moviegoers are telling us that they miss the experience of going to the movies and they’re ready to get back, but that the experience needs to look slightly different than before,” said Matthew Bakal, chairman and co-founder of Atom Tickets. “We anticipate a rapid acceleration in digital ordering, just as we have seen in other industries, in order to reduce the amount of person-to-person interactions. We’re eager to resume being together with friends and family, but we want to do so responsibly. Atom is working with our theater partners to roll out spaced seat maps so that guests can see the steps being taken in order to provide a safe environment.”

So which movies will pull customers back to the comfy seats of theaters? The female superheroes lead the pack with Marvel Studios’ “Black Widow” and DCEU’s “Wonder Woman 1984” taking 58% and 51% of votes respectively. The James Bond installment “No Time to Die”, Disney’s “Mulan” and “Top Gun: Maverick” round out the top 5. Millennial moviegoers weighed in slightly differently with John Krasinski’s “A Quiet Place Part 2” coming in third position.

About Atom Tickets
Atom Tickets is the award-winning social movie ticketing app. The Santa Monica-based company was named among the 2019 Top Places to Work in LA by BuiltInLA and is backed by Lionsgate, Disney, and Fidelity Management & Research Company. Atom allows consumers to search for films instantly, invite friends, buy tickets, pre-order concessions and more. Atom Tickets is available as a free app in the Apple App and the Google Play stores and at atomtickets.com.