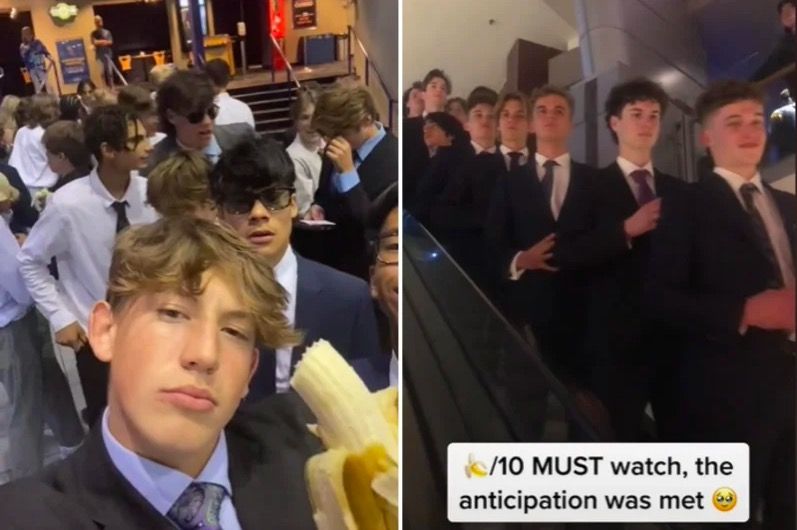 The record-breaking run of “Minions: the Rise of Gru” over the July 4th weekend has been marred by a viral TikTok trend that has led to the disruption of some cinema screenings. The #GentleMinions trend has seen youths turning up in screenings wearing suits and filming themselves clapping and cheering to the film. While some of these antics have been good natured, others have resulted in disruptions, complaints, messy auditoriums and refunds, as well as raising issues about copyright protection.

The problems seem most pronounced in UK cinemas, which has led some cinemas to ban youths dressed up in suits from entering the premise, while other cinemas have issued warnings to audiences with such groups prior to screenings. AMC-owned Odeon Cinemas appears to have taken things furthest with an outright ban on “any group of guests in formal attire” from attending screenings of the minions film.

There were reports of noises, disturbances and even banana throwing (Minions are famous for loving bananas), that led to the apparent ban. Cinema staff have also been voicing their dismay on social media about having to clean up after messy patrons at such screenings.

Not all cinemas have had a negative experience with such screenings. Irish exhibitor Graham Spurling of Cinemas@ commented “All sweetness and light in my cinemas. I just needed more screens.” There were also positive comments from individuals in the cinema community. “My kids loved it. It’s made the film into an event – it’s gone completely viral and mostly likely encouraged ticket sales. Surely we should be cheering this on rather than saying Shhh! It’s Gru, not Glyndebourne,” tweeted @melissacogavin, while @clare_BK wrote, “One kid had a cigar and a cocktail. Heroes. SO many tickets sold on the back of this.”

Some cinema operators were less amused. The Vue cinema in Worcester lost over GBP £1,000 in refunds paid out to other audience members that did not see the funny side of the #GentleMinions antics.

“The trend cost me £1,300 yesterday. I had to refund all of the tickets in that theatre because of kids shouting and mimicking the Minions while the film was playing. It was a group of about eight kids. Now, when we see any kids coming in to see the film dressed up we give them a warning. We tell them that if there is one complaint, whatever that may be, they will be kicked out of the cinema. It’s something being implemented across a lot of cinemas, I have colleagues in Cheltenham who I know have had problems as well.”

A manager at Vue Cinema Worcester

This sentiment was echoed by the UK Cinema Association (UKCA), who replied to Celluloid Junkie that, “The cheering isn’t limited to the end of the film – it’s organised disruption throughout the movie, ruining other cinema-goers’ enjoyment. Something experienced across UK sites over the weekend.” There was also a warning that cinemas that failed to stop audience members recording on-screen footage of the film risked being in breech of copyright law and could lose their licence. This was the issue faced by Fakenham’s Central Cinema’s manager Andy Lawson:

Mr Lawson had received warning from the Cinema Association that Universal was warning cinemas of the heightened risk they were seeing around the film – and even the possibility that a video capturing footage of the film was posted with the geo-location of North Norfolk. “The problem is, perhaps this generation does not understand the issues around copyright and we had word from the Cinema Association warning about possible leaks,” he said.

While Mr Lawson said he loved the ‘buzz’ that people brought to screenings by dressing up, he did not want to fall foul of UK’s Federation Against Copyright Theft (FACT) and possibly even a loss his licence.

While some online fans have gone as far as complaining that the ban smacked of George Orwell’s “1984” (though perhaps not having read the book), others noted that the films distributor Universal had encouraged fans to dress up as Minions for the cinema screenings, even going so far as to express their ‘love’ for these fans:

Cinema expert Rob Arthur (@RobArthur) took to Twitter to ask, “Did the Social Media and Ops Managers anticipate the Tik Tok situation? If they did what did they do to mitigate the challenge? Did Marketing create special screenings?”

So far it seems that there have not been any dedicated screenings for #GentleMinions fans, though possibly something that cinemas might consider in the future. A final word on the matter to hsjshshajsj @fyjiiiugfffjjj “gentleminions, please stop trashing theatres. This is not what established gentleminions should do. Leave minimal mess and respect other theatre goers.”