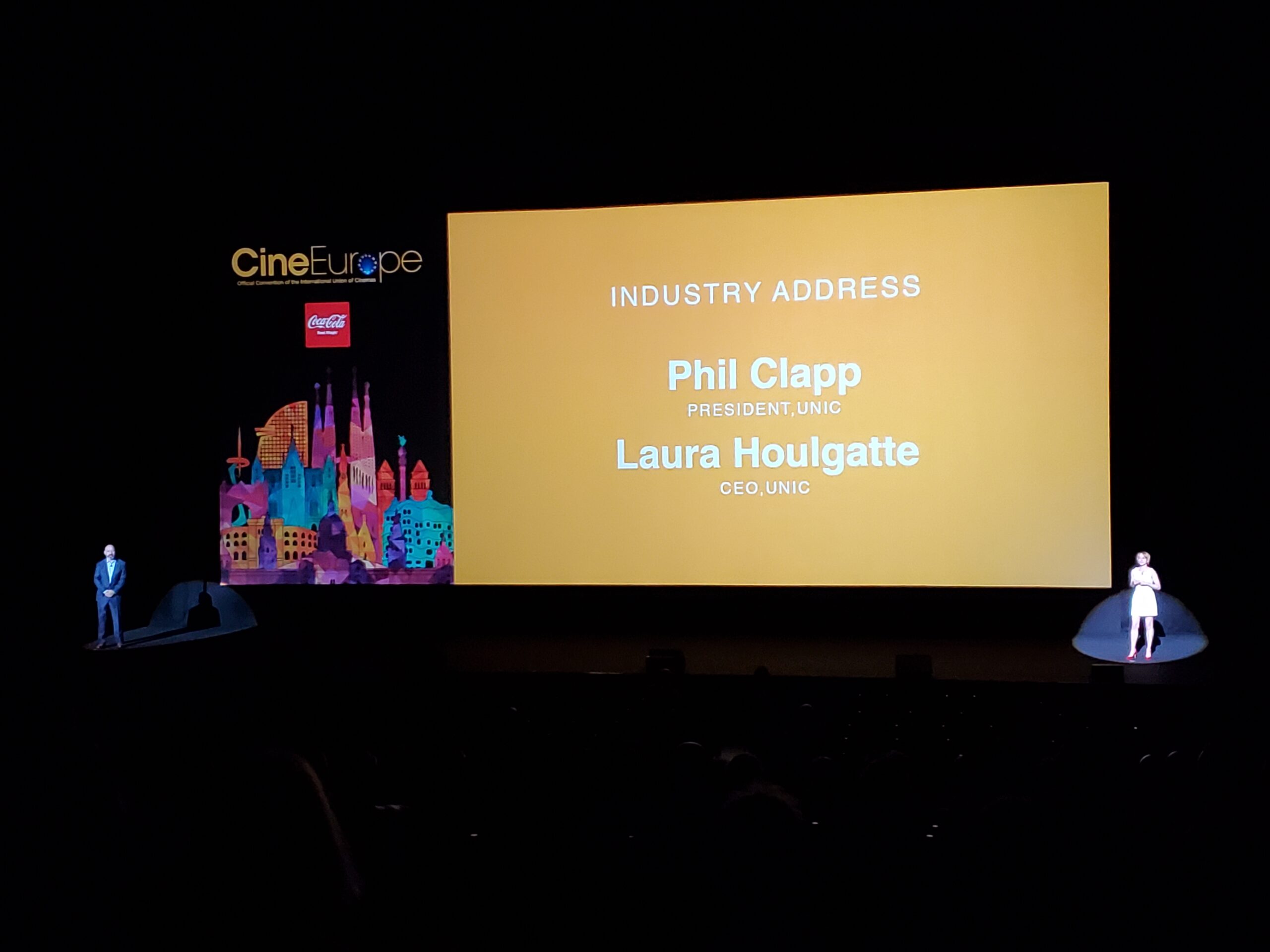 Good afternoon everyone – on behalf of UNIC, the International Union of Cinemas, we are delighted to welcome you to CineEurope 2022.

The past two years have been a rough ride for everyone in the Industry. So it’s even more special to see so many of you – friends and colleagues – here with us in Barcelona to celebrate the big screen experience.

And what a week we have ahead! Screenings, slate presentations, seminars, panels, and a cutting-edge trade show.

We started this morning with a session called re-imagining the big screen experience. Then we heard from leading industry executives about their shared vision for the future.

We are hugely grateful to all who make these sessions possible, through their participation and financial support, such as our headline sponsor, the Coca-Cola company.

Talking of which, the first of the hugely popular Coca-Cola sessions kicks off tomorrow morning, with ‘physical fights
Back’, and then a second session on ‘restoration retail’ on Wednesday.

Starting tomorrow and running through to Thursday morning, Our CineEurope focus sessions zoom in on key topics for cinema operators and their partners.

First, we’ll take an in-depth look at audiences and how we can continue to best serve them. We’ll then have a series of
Spotlight sessions – where we’ll talk accessibility, piracy, festivals, and data.

During the rest of the week, panels and seminars organised by The I.C.T.A. Will look at different facets of the ever-changing world of cinema technology. And don’t forget to visit the trade show floor!

Thanks to all of you, colleagues and partners, for your support – we could not do it without you.

A special thank you must go to our partners in film distribution for bringing us such amazing content.

Starting with Studiocanal and Unifrance, we’ll see no fewer than 8 exclusive slate presentations and four great films. The slide behind me shows when each of these presentations and screenings takes place, so make sure they’re in your diary.

We’re delighted to welcome, for the very first time, the winner of the 2022 Cannes Film Festival Palme d’Or – Triangle of Sadness. It’ll make you laugh, it’ll make you wince and more than anything, you’ll never want to get on a yacht again. Or for the first time.

Last year’s strong performance by the European cinema sector sent a clear signal that audiences are back – particularly when a diverse range of new films is on offer – and that cinemas have re-taken their position at the heart of local communities.

European cinema admissions increased by around 36 per cent, with over 590 million visits across the region. Box office reached close to an estimated €3.7 billion, an increase of 41 per cent on the previous year.

All this when most screens were shut for the first six months of the year and operating for the remainder under limited occupancy and additional restrictions.

Major territories such as the UK, France, Poland and Spain enjoyed strong results in 2021, firmly setting themselves on the road to recovery.

We also witnessed incredible growth in smaller markets including Bosnia-Herzegovina and Georgia.

We’re of course not yet at the levels of success we saw before the pandemic, when in 2019 European cinemas saw a record 1.34 billion admissions.

But the strength of the recovery is clear and growing by the day.

As you can see behind me, the relevance and success of local European releases has never been more apparent than during recent challenging years.

In many UNIC territories, it was local titles above all others that fuelled the recovery, most impressively in the balkans where the Serbian titles Toma and juzni vetar 2 contributed to triple-digit growth in Croatia, Serbia, Montenegro and Bosnia and Herzegovina.

With the support of Comscore, we have been able to monitor weekly european box office results, highlighting the value of national, European and international releases across the region.

While we celebrate those local successes, let’s not of course overlook the contribution made by us studio colleagues.

Looking first at 2021, no time to die from Universal was the leading title in admissions for the year, with over 34 million tickets sold across the region. The other big winners were Sony’s Spider-man: No Way Home, Warner Bros’ Dune, Universal’s F9 and Sony’s venom: Let There Be Carnage.

Together, these titles attracted around 100 million visitors, underlining the fundamental importance of new content for
audiences. Several of these titles broke national and international box-office records.

In December 2021, spider-man: no way home hit a multitude of milestones on its opening weekend, including third biggest worldwide box office debut of all time and the second biggest opening of all time in the us. It grossed over $1.89 billion at the global box office, making it the sixth highest-grossing film ever.

And already in 2022, we’ve seen a number of releases strike a major chord with cinema audiences. Uncharted at the start of the year.

And then Batman and Doctor Strange, which respectively grossed over 770 and 942 million dollars globally.

But, even more recently, Top Gun Maverick. Some of the older people in the audience might remember the first film. At some point, Iceman challenges maverick and asks “whose side are you on?”

Well, there’s no doubt whose side Tom Cruise is on, with that title so far grossing 885 million dollars at the global box office.

And let’s not forget Jurassic World: Dominion, which has been grossing 622 million dollars globally. People love seeing other people being eaten by dinosaurs. Why wouldn’t they?

And there’s more to come.

You’ll see on the screen a small selection of the exciting films that will hit our cinemas later this year. These include not just blockbuster titles from the us studios but also a range of engaging local releases.

The hugely impressive box office figures we’ve seen so far – and the promising predictions for 2022 – are proof of the resilience of the global cinema sector, underpinned by an insatiable public appetite for the big screen experience.

We all know that the big screen experience is very special. But it’s always better to hear that from people who are maybe a little bit better known to the public than are many of us – no offence to anyone out there.

Cinemas are spaces where cultural diversity flourishes. They are at the heart of their communities, a unique place where people can meet to laugh, cry, get scared together.

Sometimes all in one movie.

And all that’s now more important than ever after what we’ve been through the past couple of years.

We want to acknowledge those who supported our sector – the governments across europe that provided vital financial support and, of course, those studios and distributors who showed faith in the sector and brought their films to the big screen.

Together, we need to continue to help ensure the survival of local cinemas, whatever their size and location.

And for some European territories, the challenges are not just economic – we would like to give here a special message of support to our Ukrainian colleagues.

We can only imagine the challenges the last four months have brought you.

You have our undying support and solidarity and a firm commitment that when the time comes, we will be in the vanguard of those looking to help you rebuild your cinemas.

While no one would have chosen to experience the challenges of recent times, they have in truth proven a number of things.

Firstly – as proven by the presence of so many of you here today, the resilience of our sector. But even more so, those
Experiences have proven beyond doubt the value and relevance of the theatrical model.

For audiences it provides them with an unparalleled opportunity to see a film as its director intended – on the big screen as part of a shared communal experience.

But also for the industry, maximising revenues and reducing the threat of film theft inherent in day-and-date and other early inhome release models, cannibalising revenues for all.

The evidence of the numbers is now clearer than ever and is thankfully now being fully reflected in the decisions made by colleagues in film distribution.

Theatrical works. For all of us. For exhibitors, for distributors, for producers, and for the public.

We at UNCI have been doing our utmost to support you throughout recent challenging times.

In addition to all our activities, covid and non-Covid related, we have expanded our mentoring programme. We’ll add another cohort of 11 pairs for our sixth year.

We are delighted that IMAX and Vista Group are principal sponsors. As joint sponsorship partners, they are our
‘Champions of the Programme’, supporting UNIC’s mission to achieve a more diverse and inclusive cinema industry.

Together with BoxOffice pro, we have also released in recent days the inaugural giants of exhibition: Europe listing, ranking the top 50 European cinema groups by screen count.

This year’s ranking is led by odeon cinemas group with nearly 2,500 screens across the uk and Ireland, Finland, Germany, Italy, Norway, Portugal, Spain, and Sweden. The top four is rounded out by Cineworld (UK), Vue International (UK), and les Cinémas Pathé Gaumont (France).

And a quick mention for multiplex cinemas of Ukraine, standing proudly at number 26 in the list.

Taken as a whole, the companies listed in the ‘giants of cinema: Europe’ have headquarters based in 18 territories and operate across more than 35 territories. There can be no clearer evidence of the strength and diversity of the European cinema industry.

And a quick word about the land that brought you Matthias Schoenaerts, Tintin, the Dardenne brothers and yes, Audrey Hepburn.

Many of you will know that UNIC’s principal purpose is to represent the views of cinema exhibition with European lawmakers in Brussels. Now more than ever, we need to ensure that EU policy-makers and politicians get the full picture and that the interests of our industry are protected and celebrated.

So a huge thanks to all our members our partners, and the unique – yes, pun intended – UNIC team for all your work,
Dedication and support.

Huge thanks also to Bob and Andrew and all of our partners at Film Expo Group, for their extraordinary work and for
continuing our great partnership.

In conclusion, all you will see and hear this week will make crystal clear that cinemas are not only here to stay.

We’re here to grow and to continue to bring audiences together all over the world to share in the unmatched big screen experience.

Have a wonderful CineEurope