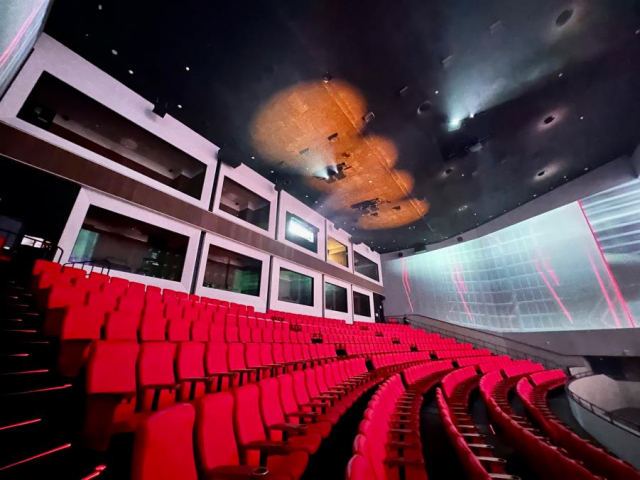 Korean cinema major CJ CGV has unveiled a new premium large format (PLF) concept with the ScreenX PLF. This is an upgraded version of the ScreenX immersive screen that projects images in a 270 degree field of vision. There is also the addition of a private booth in the back, that allows audiences the ability to watch the film in an enclosed balcony.

CGV opened the Screen X PLF theater in Yeongdeungpo and Seomyeon. The former featured the Starium Hall, which is said to have held the record for the largest screen size, reopened with 462 seats. The new ScreenX PLF auditorium boasts a screen 69 meters in width, that uses 10 projectors. Separate silver screens were applied on both sides of the wall to enable viewing in a clearer picture quality. The auditorium is also enabled with equipment for special performances, such as lighting, fog, and laser, to be used for live performance and event cinema contents such as theater concerts, e-sports, and lectures.

CJ CGV has recently stated that it will increasingly focus on high-technology, multi-projection screens as well as premium cinemas and experiences in order to cater to changing customer demand in the post-Covid era. “We will focus more on expanding high-tech screens in a bid to help movie fans not only watch content but also experience something more special at theaters,” said Cho Jin-ho, responsible for CGV’s content programming. “We are also adding more small private screening rooms for those who want their own space.”

“We can say ticket sales of ScreenX and 4DX theaters pulled off steady growth during the pandemic, while the global and Korean film industry struggled with a sharp drop in overall revenues,” CGV said. “As people enjoyed entertainment content easily and comfortably at home through online streaming services, they want something different at theaters.”

In addition the auditorium features a so-called “Private Box.” It is presented as “a new high-end theater format,” which allows an audiences of two to four people to watch a movie while completely isolated from the outside. Each box features a reclining sofa and air purifier, with individual speakers installed in each sound-proofed box to reinforce the sound system. Also provided are drinks, popcorn, blankets, slippers, and wet wipes. As well as being installed in Yeongdeungpo, CGV plans to refurbish other existing multiplexes and install private boxes in Yongsan I’Park Mall, Yeonnam, and Seomyeon Sangsang Madang.

CJ CGV has long been pushing the envelope in terms of new premium technologies and services. The ‘Private Box’ concept was first tested in a cinema where the former projection room was split up into a projector space, with two private areas on each side. It has since been copied by other operators, such as the MK2 Hotel Paradiso in Paris, France.

The ScreenX format has been growing in popularity, not just in terms of the number of installations, but also in terms of Hollywood studios making greater use of the “horizontal IMAX,” as one review described it. For the recent “Top Gun Maverick”, Paramount Pictures added up to an hour of extra footage. “I actually had cameras pointing out both sides,” of the cockpit, the film’s director Joseph Kosinski explained to Cinema Blend. “So on the ScreenX version, you’re gonna get an hour of live action side footage as well. So instead of going vertical, we go horizontal.” CJ CGV currently operates 350 ScreenX theaters and 783 4DX theaters across 106 countries, including the United States, France, Britain and Japan, as of June 2022.