Mk2’s Hotel Paradiso in Paris is more than a movie-themed hotel run by a cinema operator; it is a reimagining of the premium hospitality experience that fuses the magic of the cinema with the finest luxuries of a boutique hotel. Situated next to and on top of the Mk2 Nation multiplex that has been a fixture of the seventh art in the 12th arrondissement, it ought to be the destination of any serious cinema lover, if only for one night in movie paradise.

Operated by the brothers Karamitz (Nathanaël and Elisha), Mk2 was already a mini-powerhouse of film distribution and cinema operation, spanning both France (Paris) and Spain. The company has a reputation for innovation and bold moves in a country that is more often known for its heritage and being conservative when it comes to its seventh art. So the news that Mk2 was branching out as a hotelier must have raised a few eyebrows.

The entrance to the hotel is inauspicious and almost cafe-like with its outside seating and coffee bar inside. It is only if you look up that you notice the futuristic concrete and massive rectangular windows that sit quixotically between the traditional Parisian buildings. It is a reminder of the Gaumont Les Fauvettes and the bold Fondation Jérôme Seydoux-Pathé building, both of which embrace futuristic design in celebration of 125 years of cinema history. 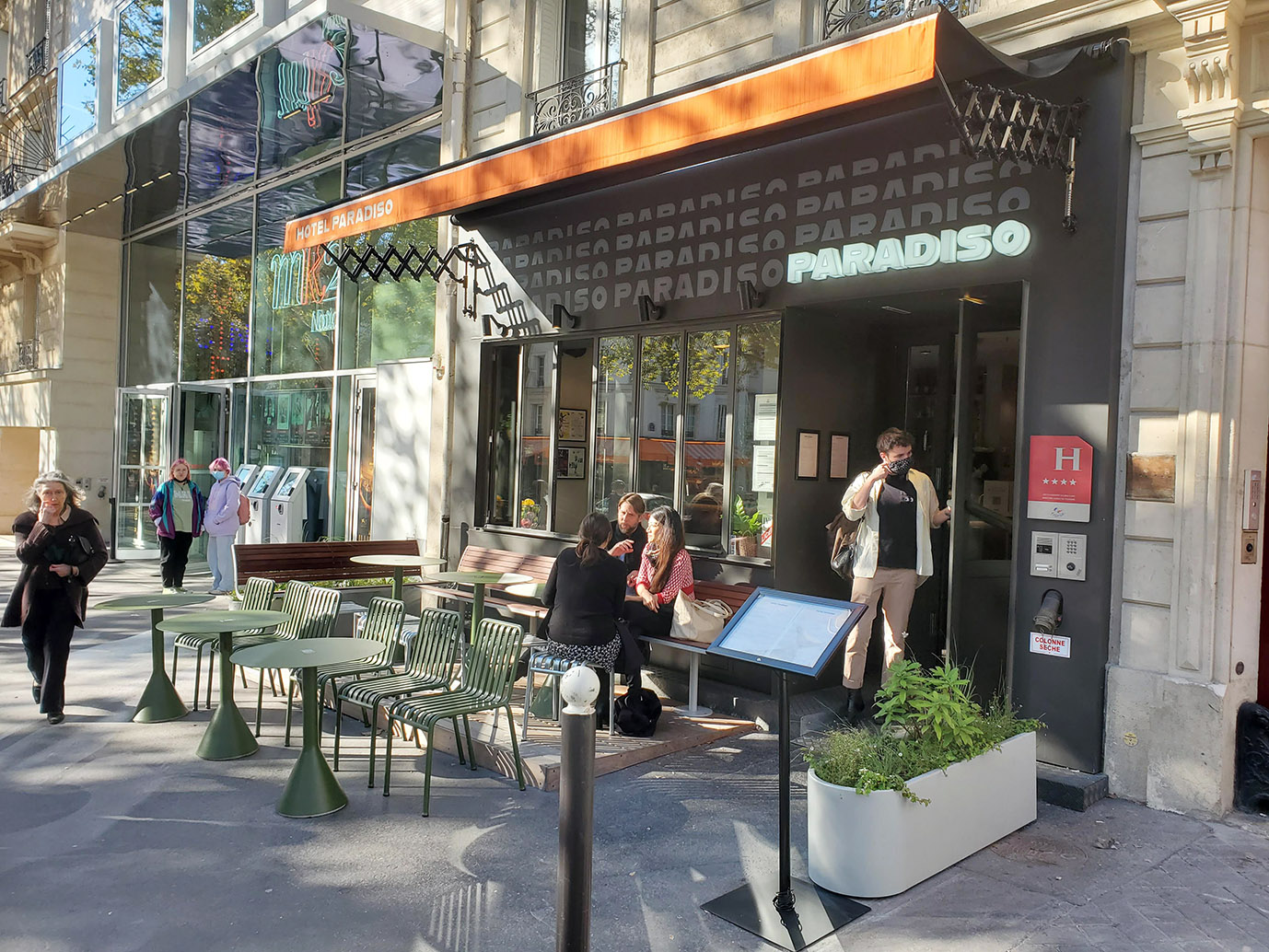 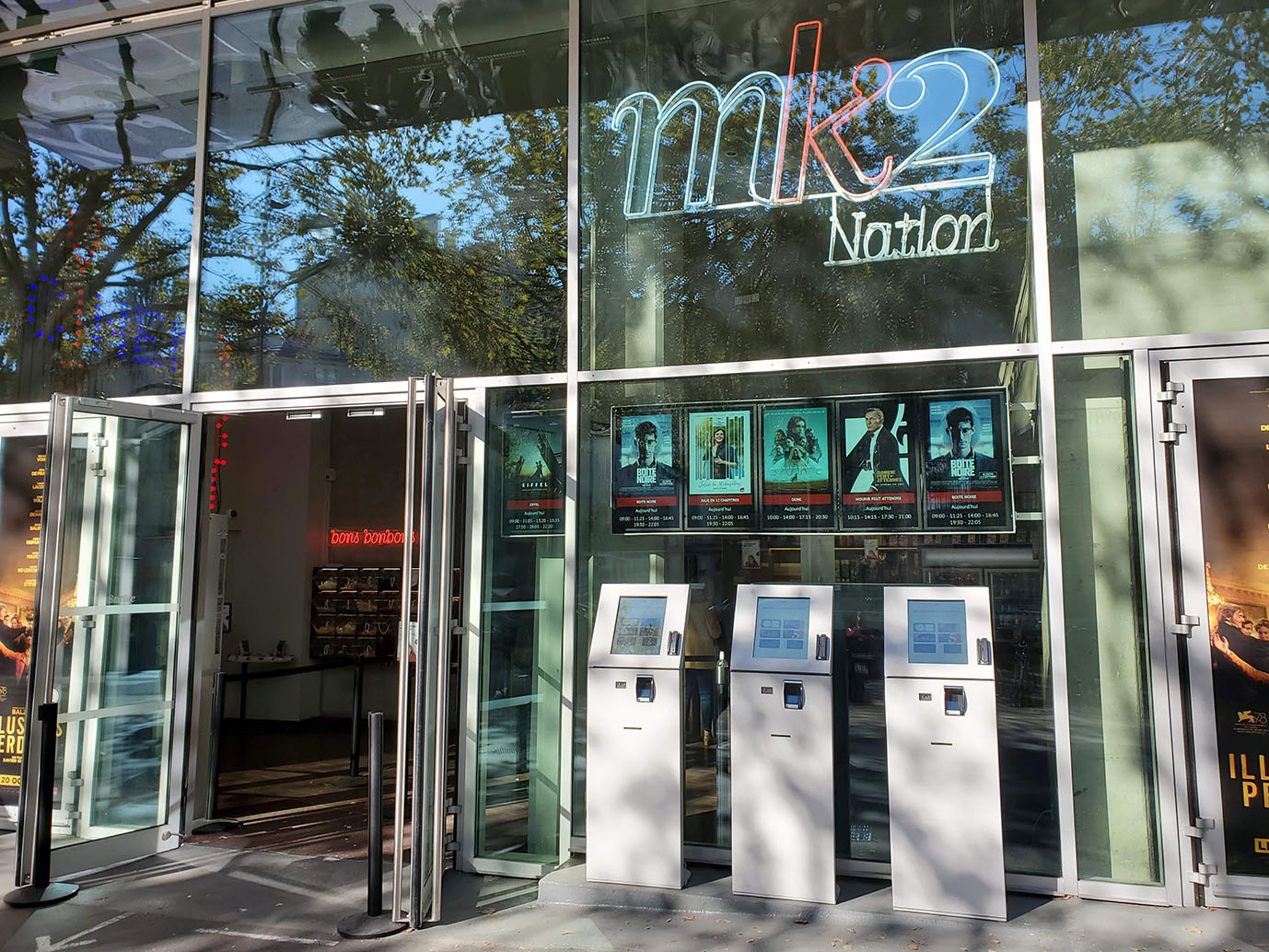 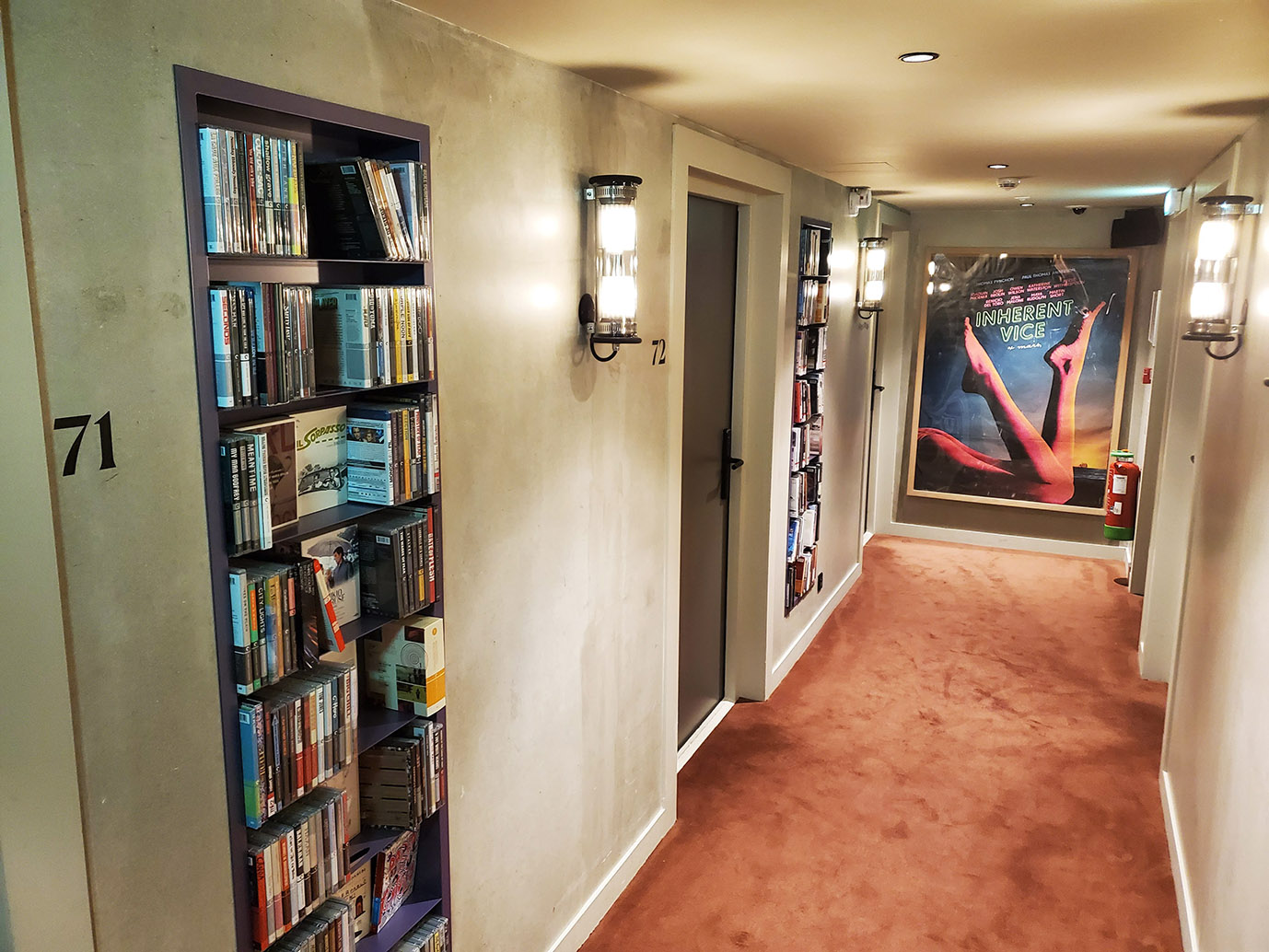 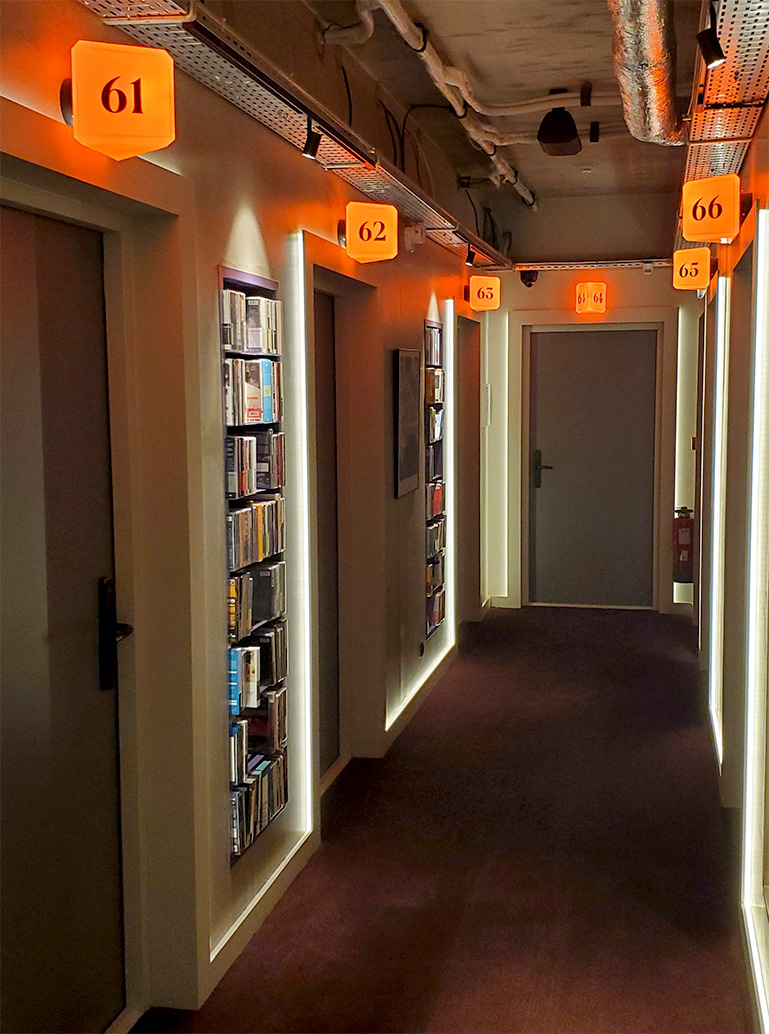 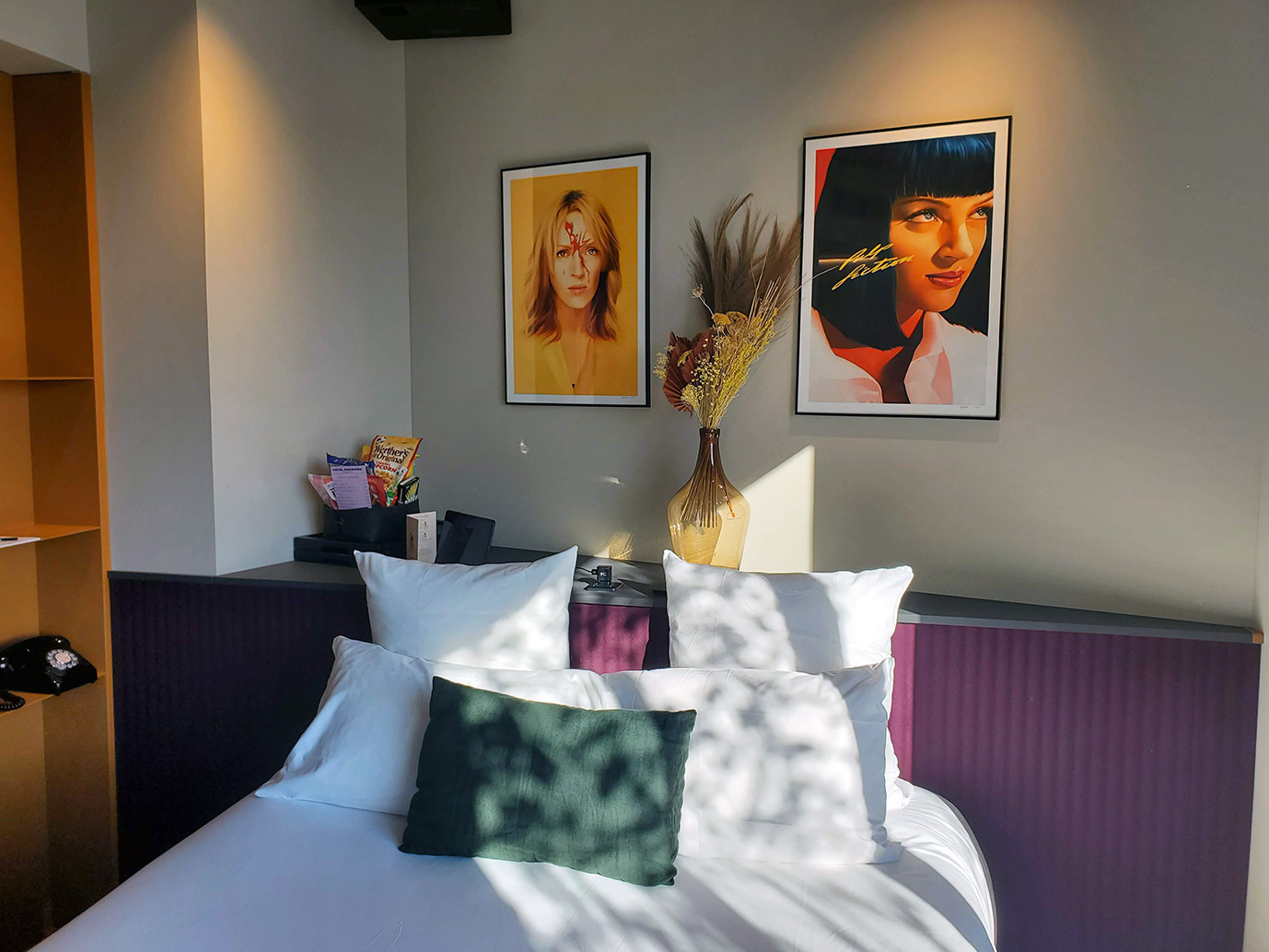 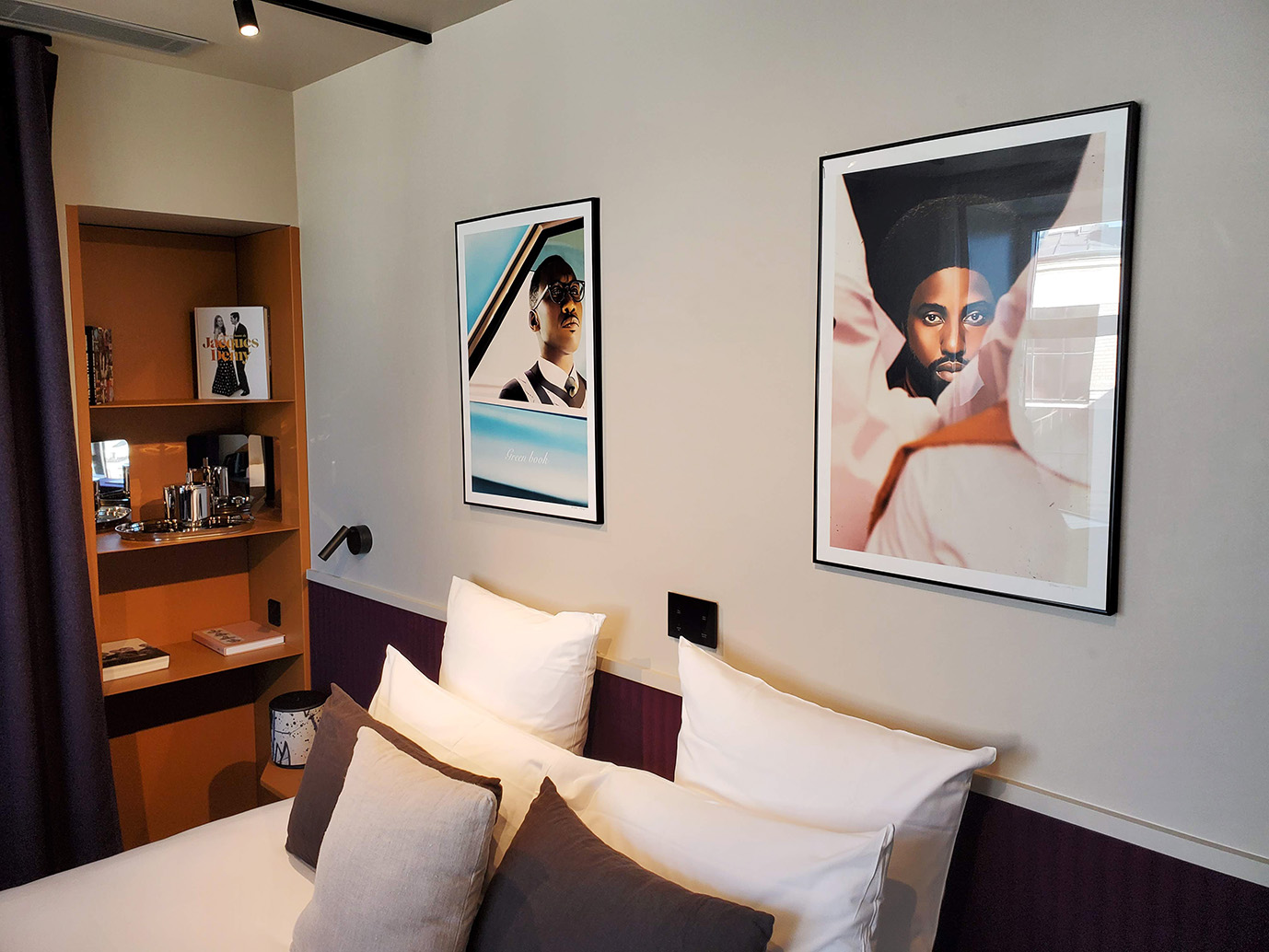 The hotel has 35 rooms and two suites over seven floors. The suites are a marvel of design and technology, as they are equipped with DCI grade projection equipment that allow you to enjoy the latest cinema blockbusters from the comfort of your (super comfortable) hotel bed. Everything from the projection to room service and outside food ordering is done via a tablet, with full automation. The corridors have shelves filled with thousands of DVD titles of classic, cult and contemporary films.

The regular rooms are smaller but no less well thought through in terms of design, comfort, style and understated cinematic feel. Rather than just hanging framed posters of famous films, the rooms feature panting reinterpreting posters by famous French artists. Each room is designed with the bed in the centre, looking out over Paris or the back of the building that features a huge mural of Charlie Chaplin from “The Kid”. The effect is the window being a screen in itself and Paris, the movie outside. But with a press of a button the lights dim, the curtains close, the screen drops down and the show starts.

Hotel Paradiso guests have a choice of films from every streaming service imaginable, from Netflix to Mk2’s own VoD service. There is of course also the DVD library. The rooms are designed so that you can see the screen from every part of the room, even if you are in the bathroom or in one case, lying in the bath. The bathroom for the suites are some of the largest I have ever seen in a hotel. The hotel has already attracted numerous famous guests, but the staff are too discreet to drop any names. This hotel is a celebrity in itself and doesn’t need the endorsement of movie stars of Instagram influencers to impress. 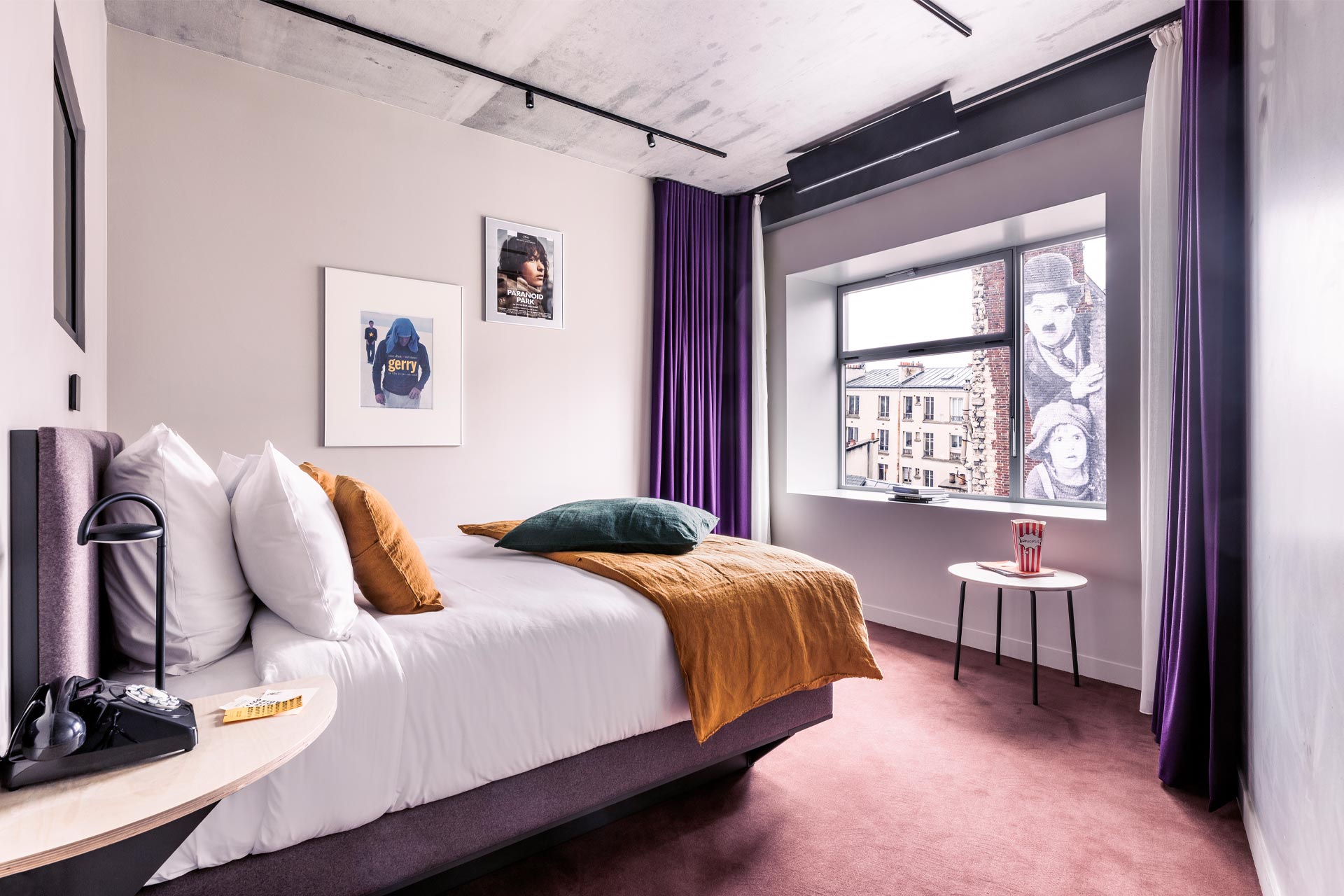 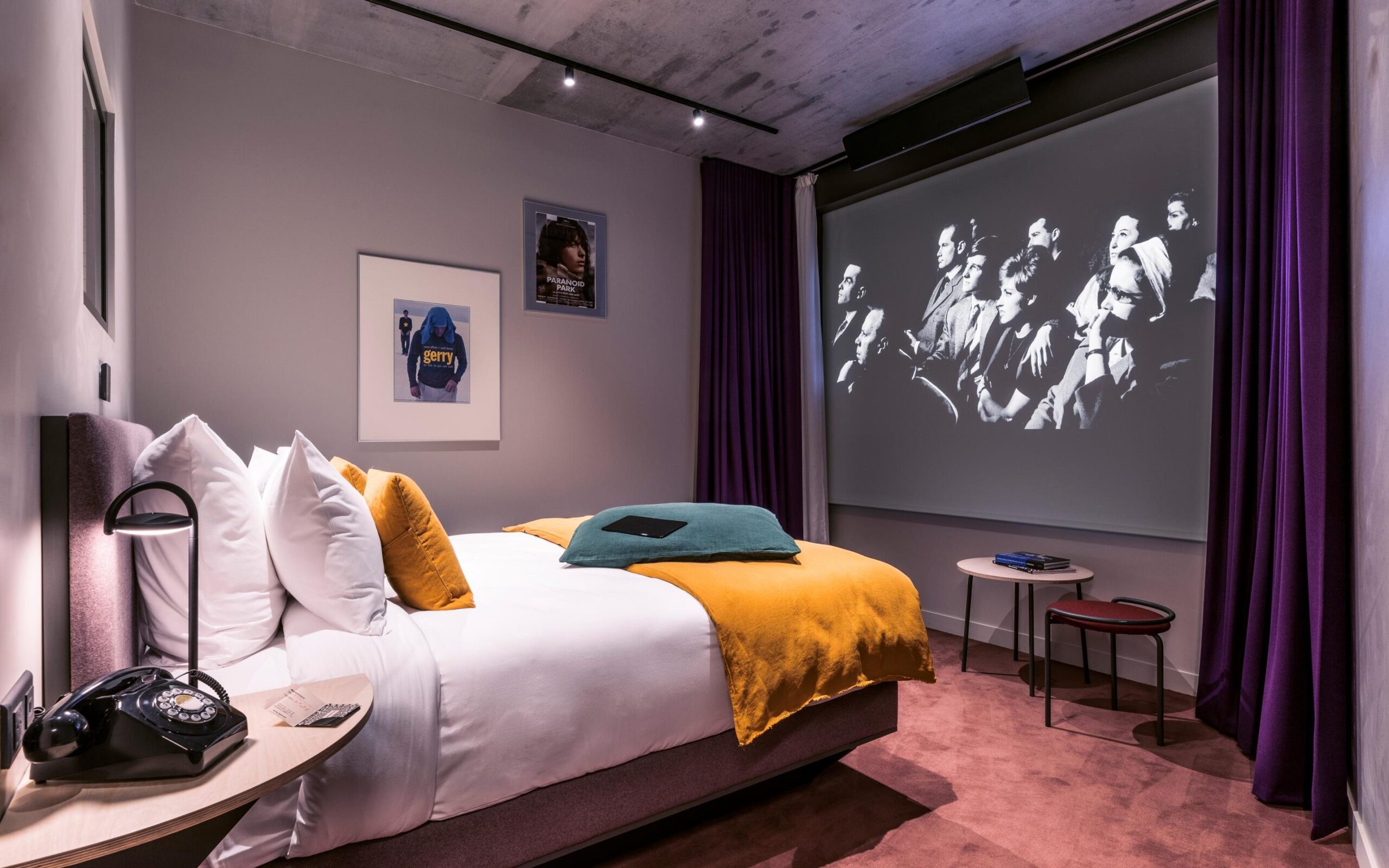 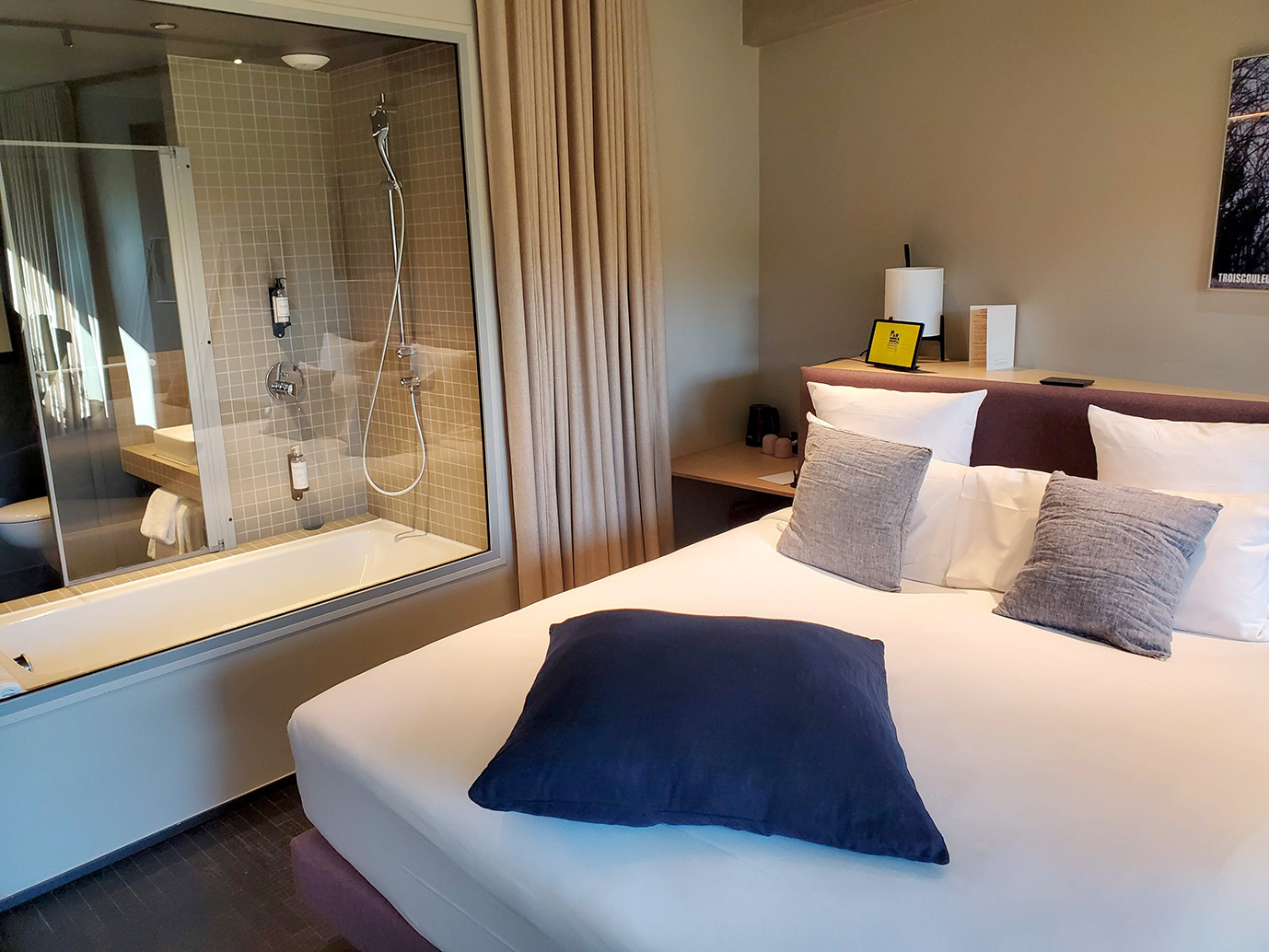 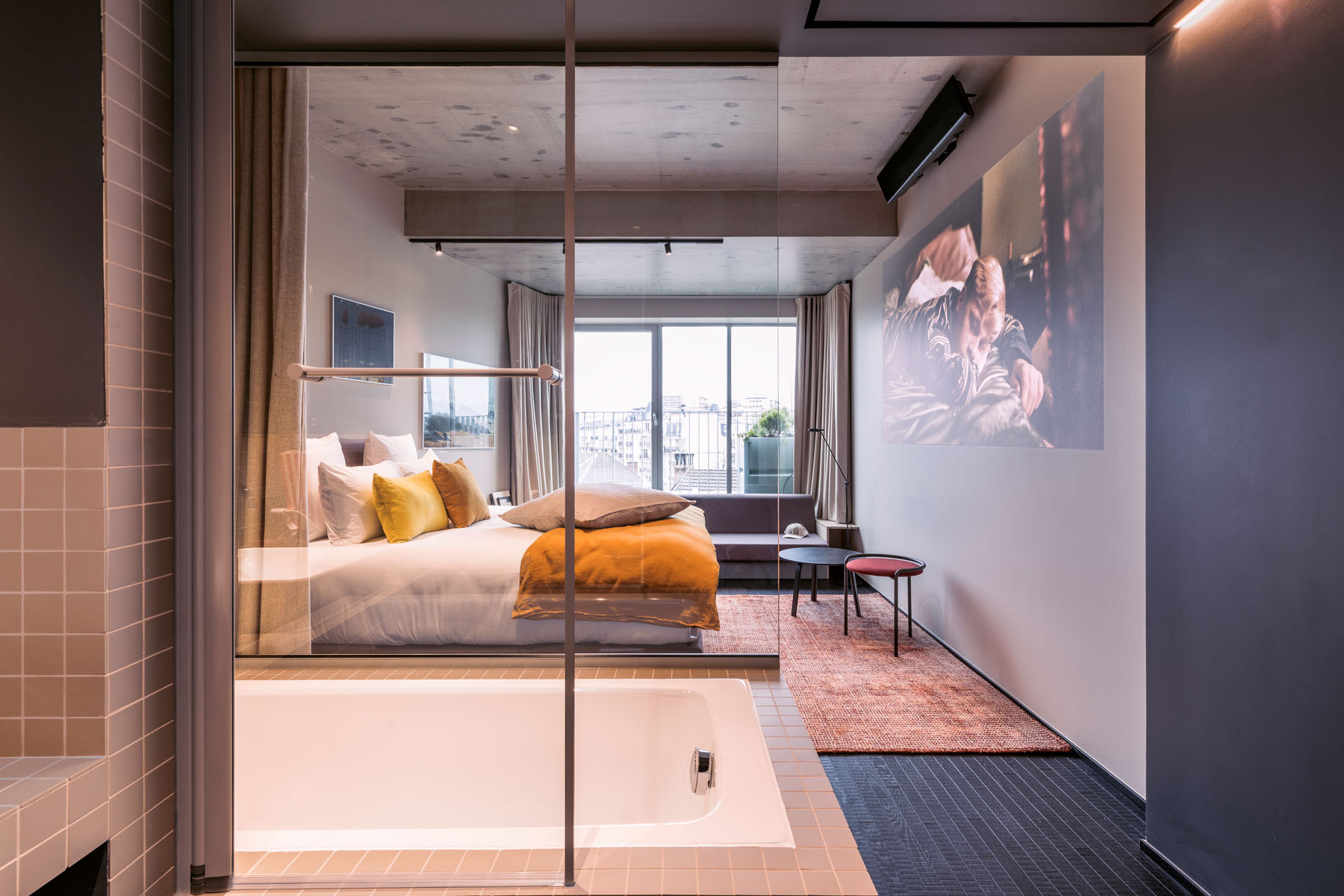 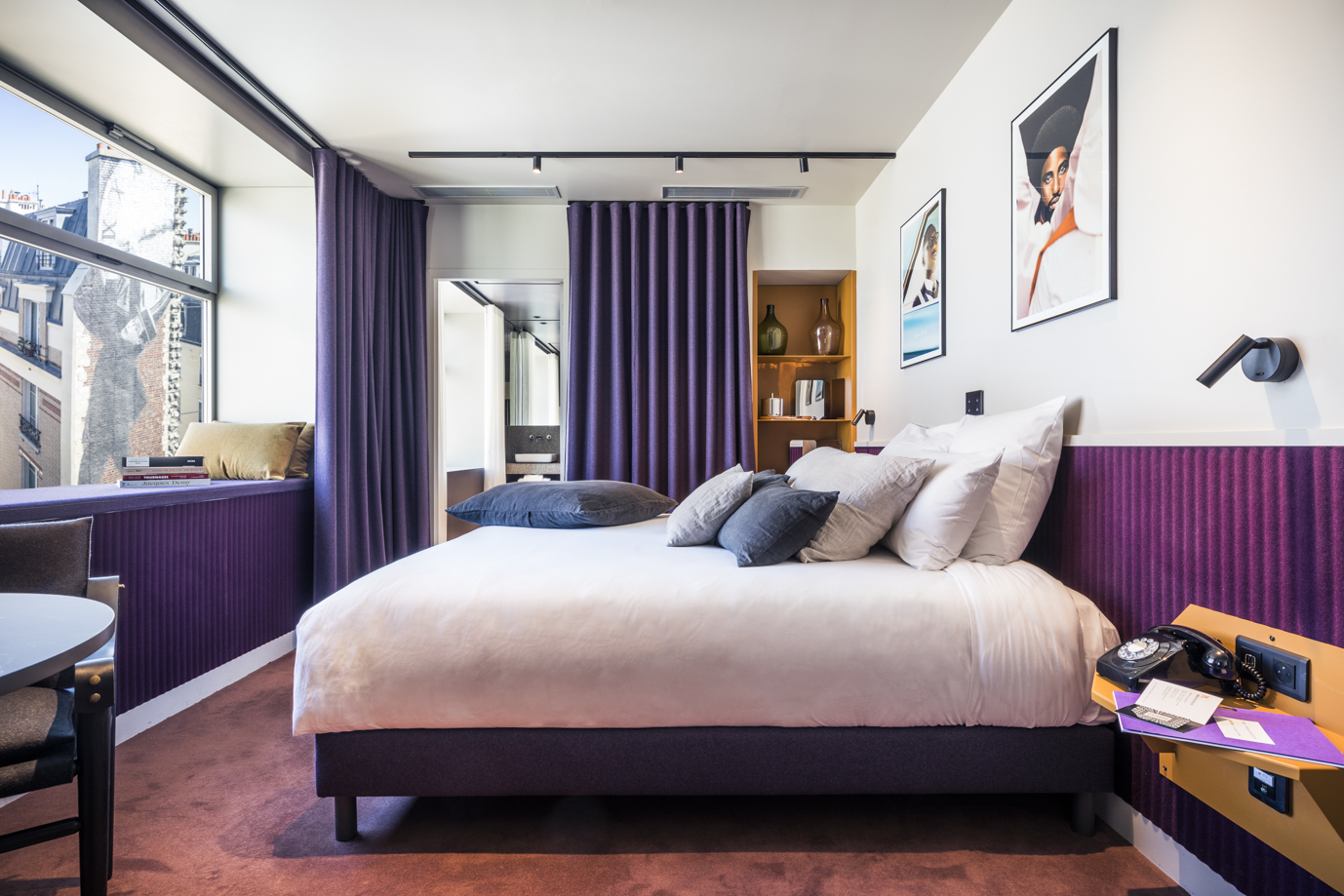 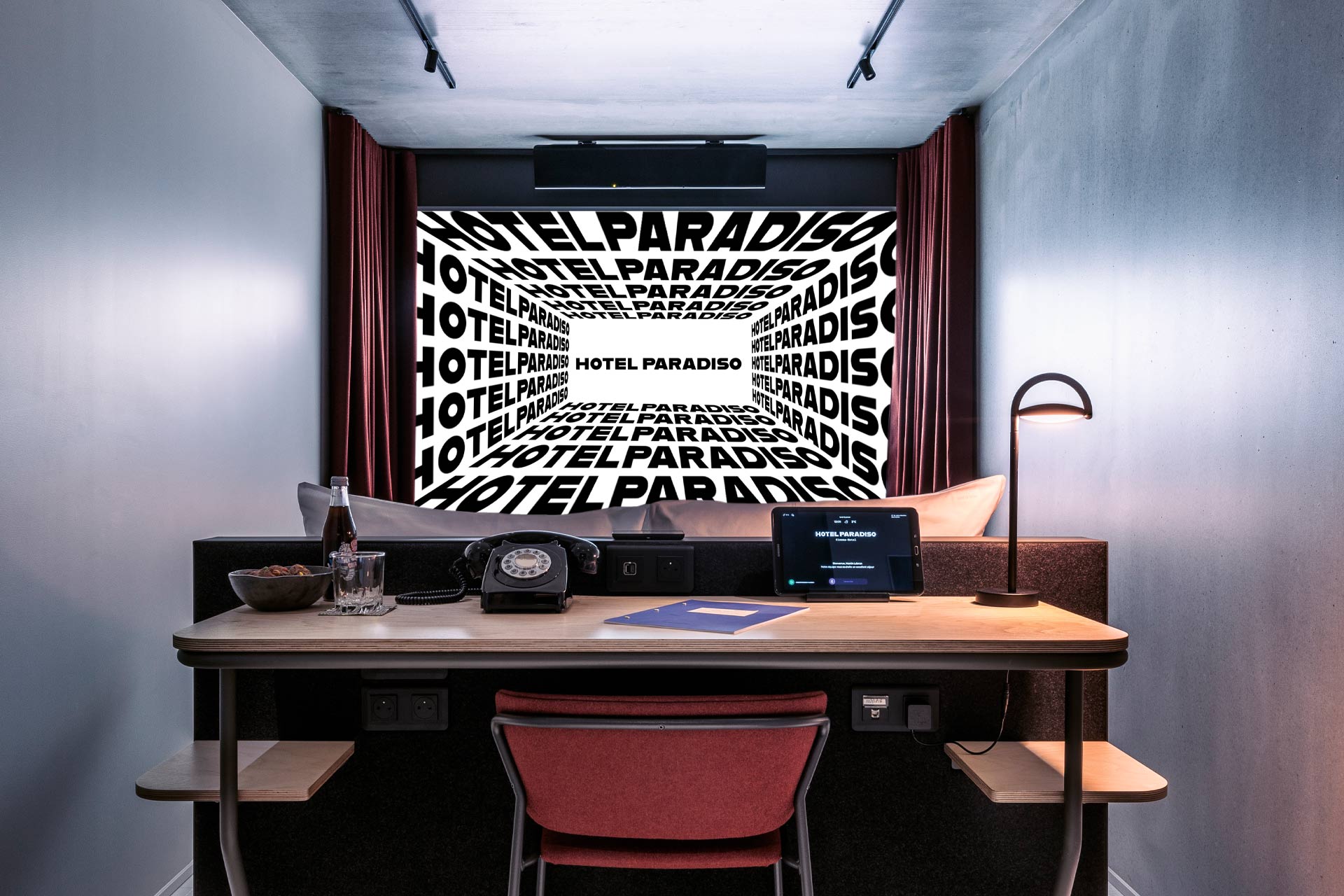 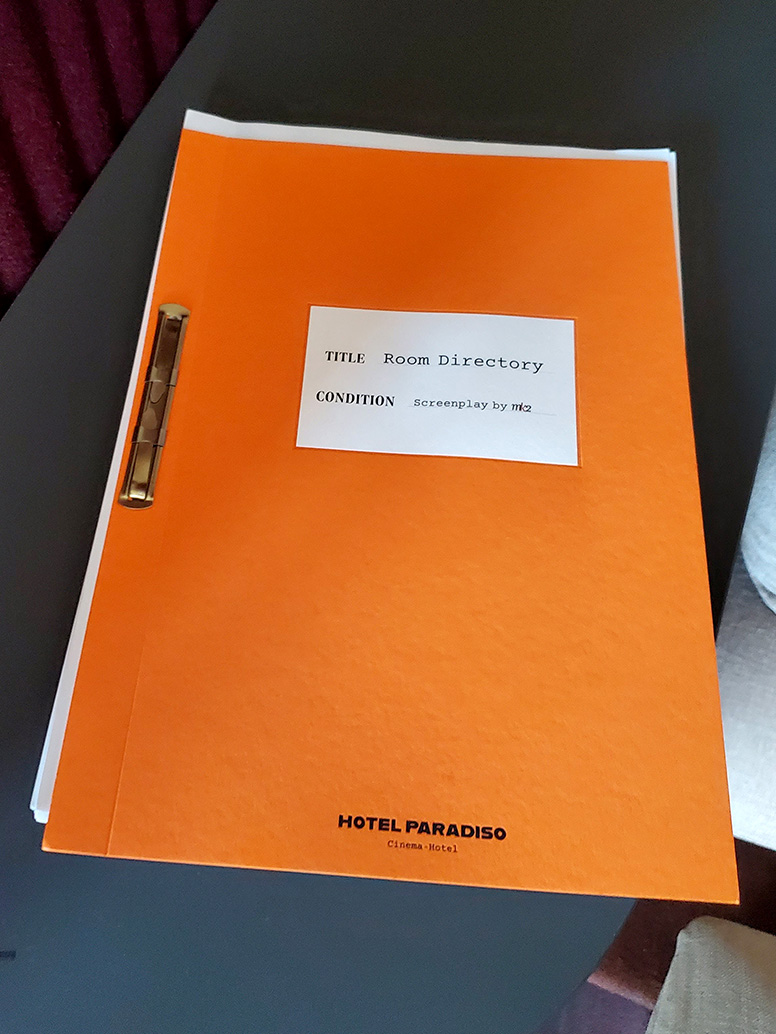 There is even twin bedrooms for families staying with children. And if films are not their thing, there are PS5s available to plug into the largest screen where hundreds of video games can be enjoyed. The attention to detail is inspiring, with the hotel and room information printed in a paper booklet made to resemble a film script. The Do Not Disturb/ Please Clean signs to hang on the door feature dialogue from movies. The walls, curtains and interiors are all designed to subtly evoke the inside of a cinema.

Go to the top floor and you will find yourself in a roof garden with an outdoor bar and a screen that shows films during the summer. It offers a 360 degree panoramic view that takes in the whole of Paris, including the obvious landmarks (Eiffel Tower and Sacre Coeur).

Two additional treats are in store on the first floor. There is the karaoke room that seats 10 people comfortably and offers the chance to belt out “Let It Go” or any of several thousand film or pop songs off an enormous LCD screen. It also doubles as a useful corporate meeting space, with the option, once again, of plugging in a PS5 for gaming action on a large screen. Naturally a karaoke room in this hotel had to be called La La Land. 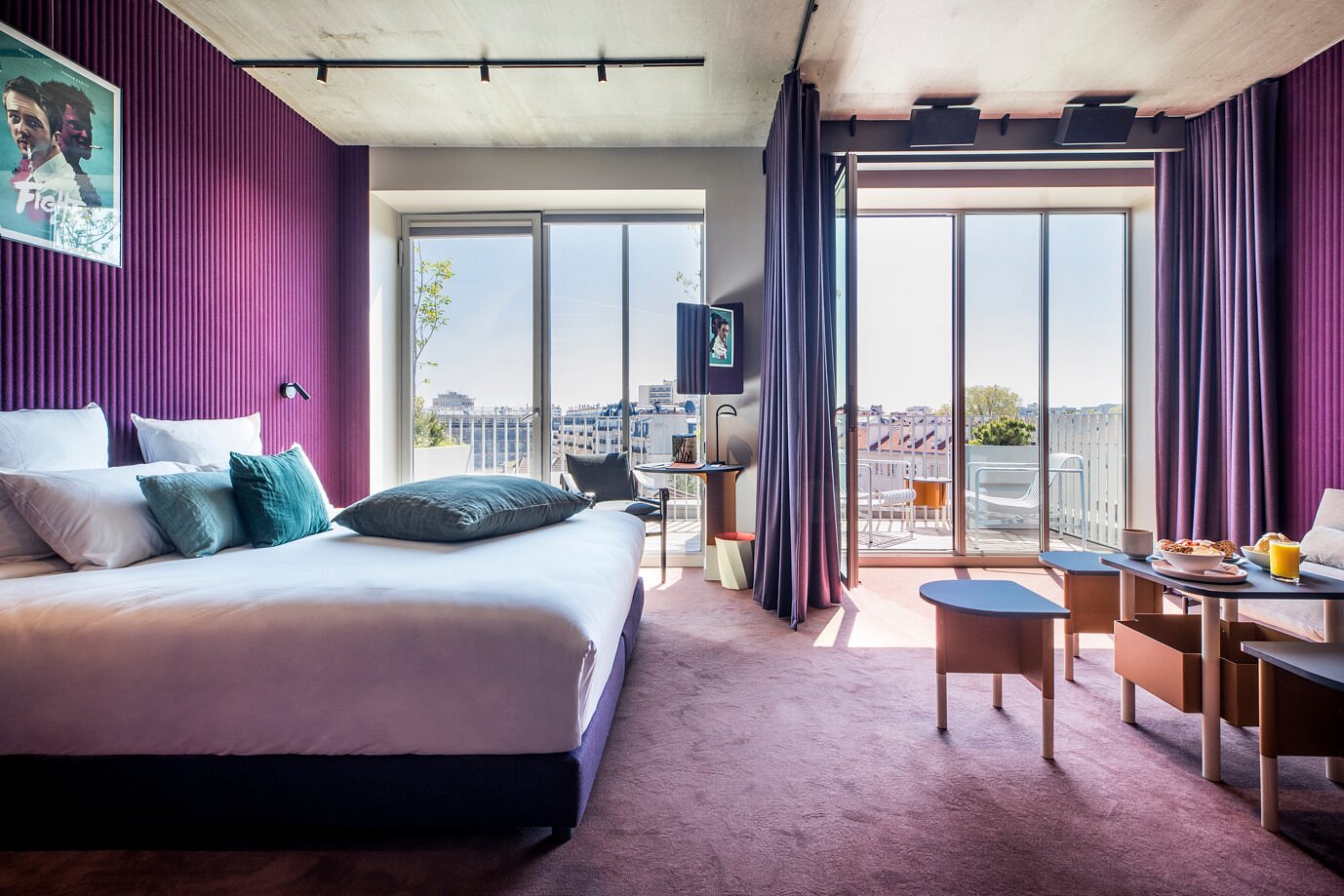 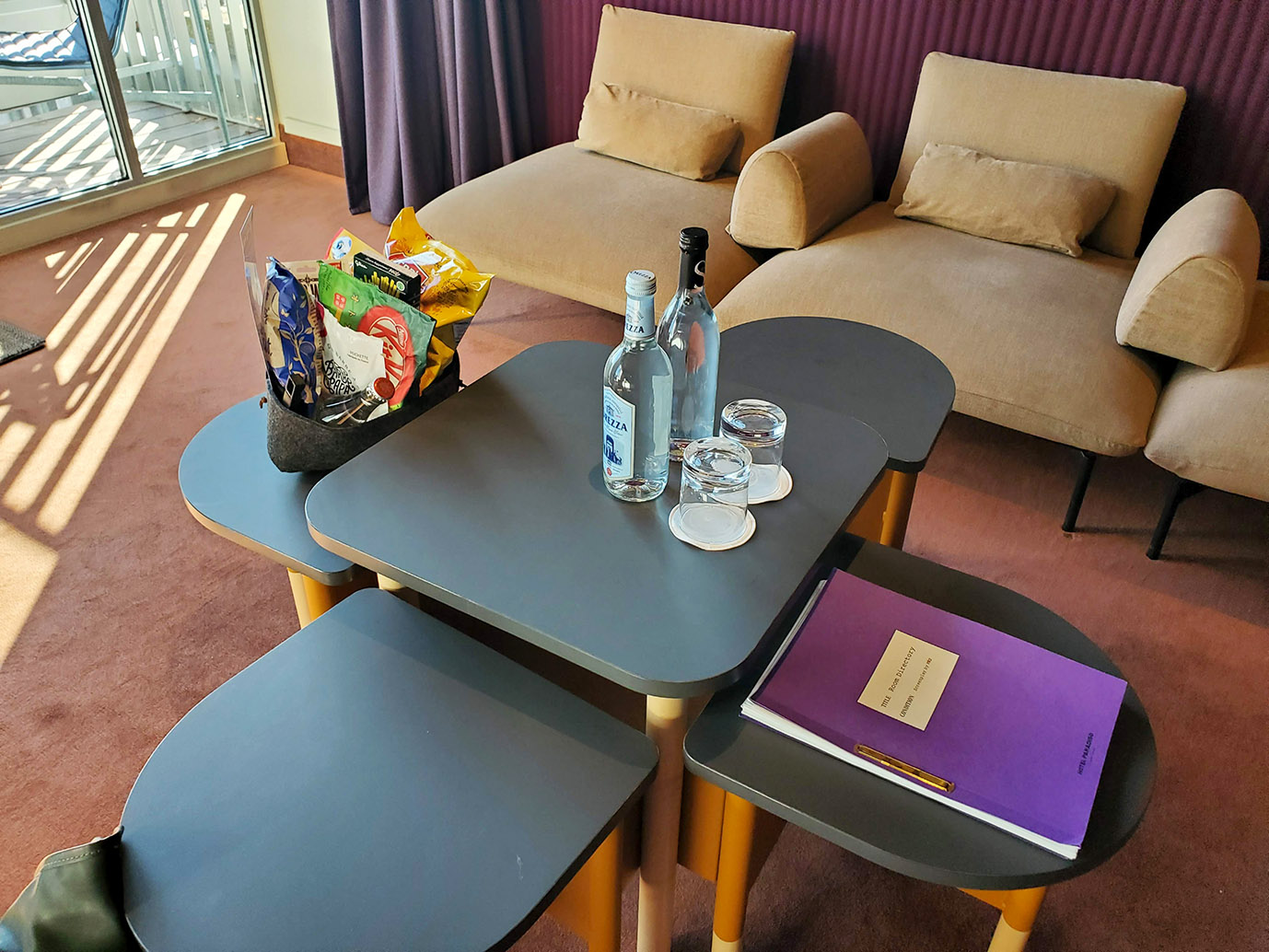 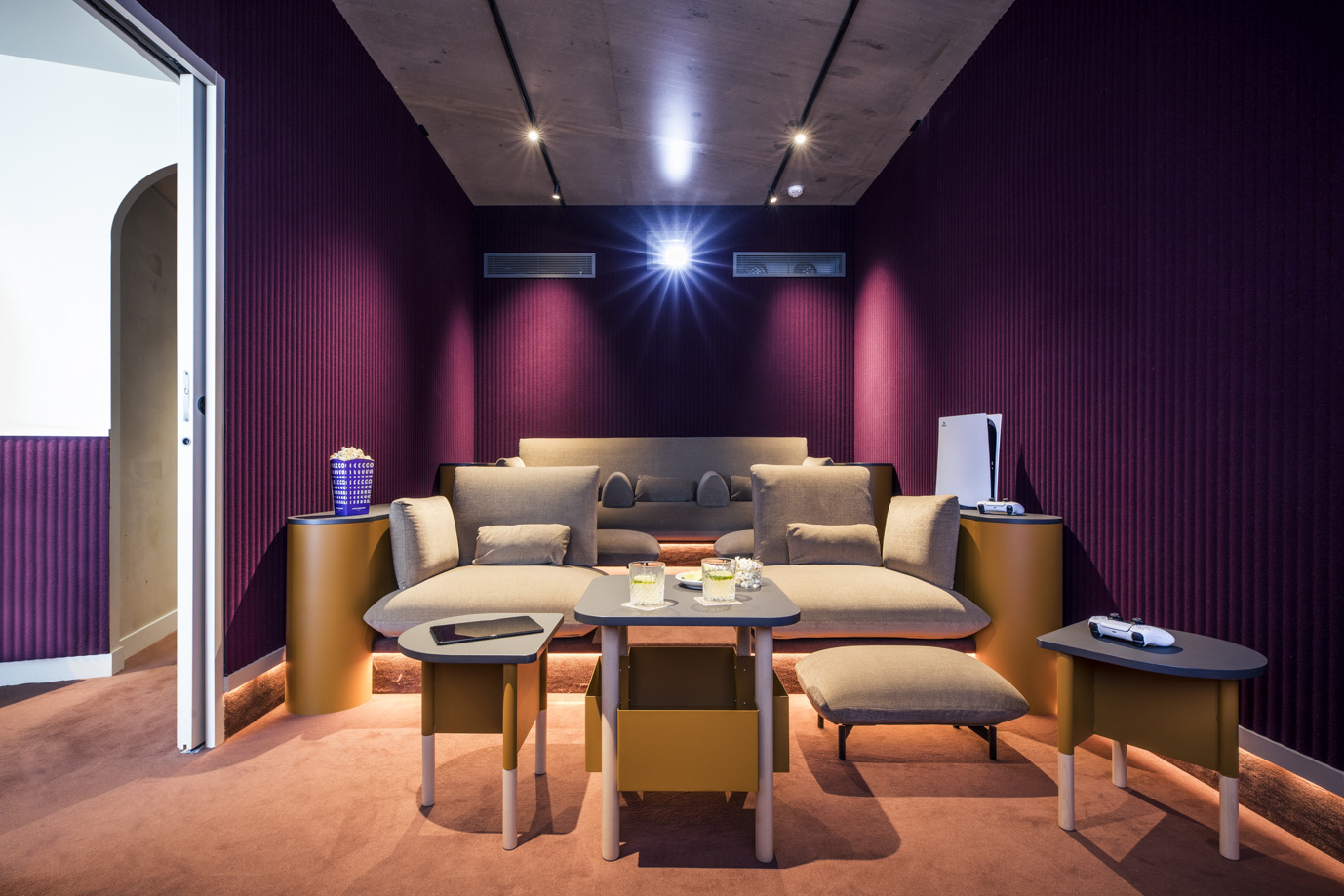 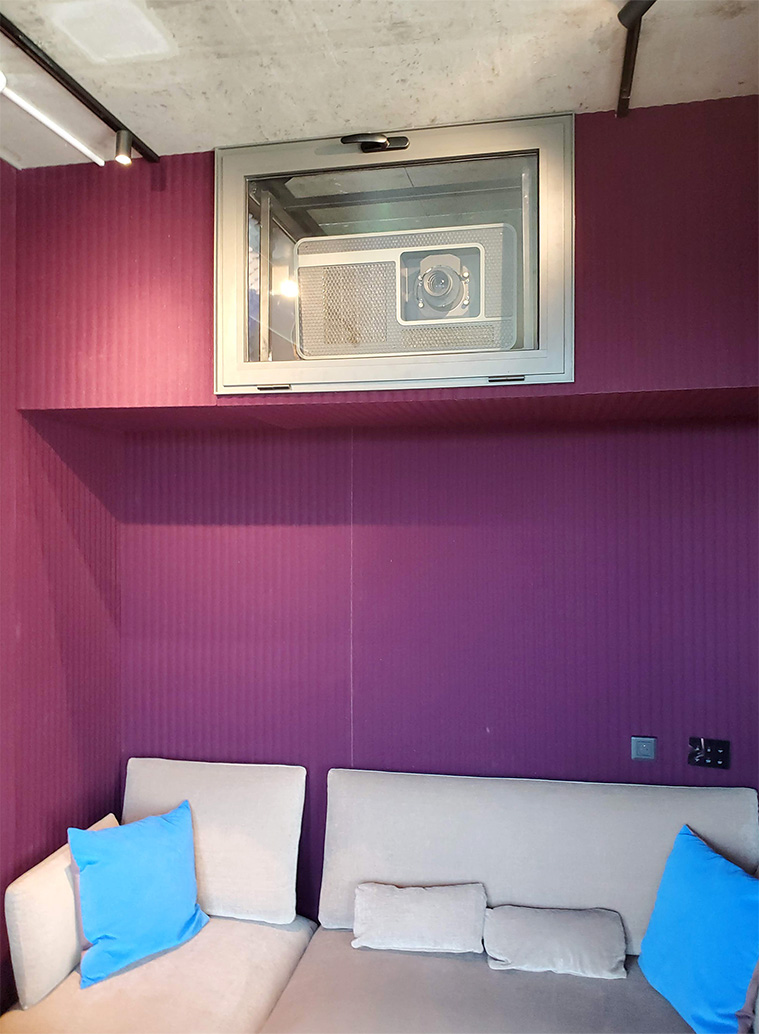 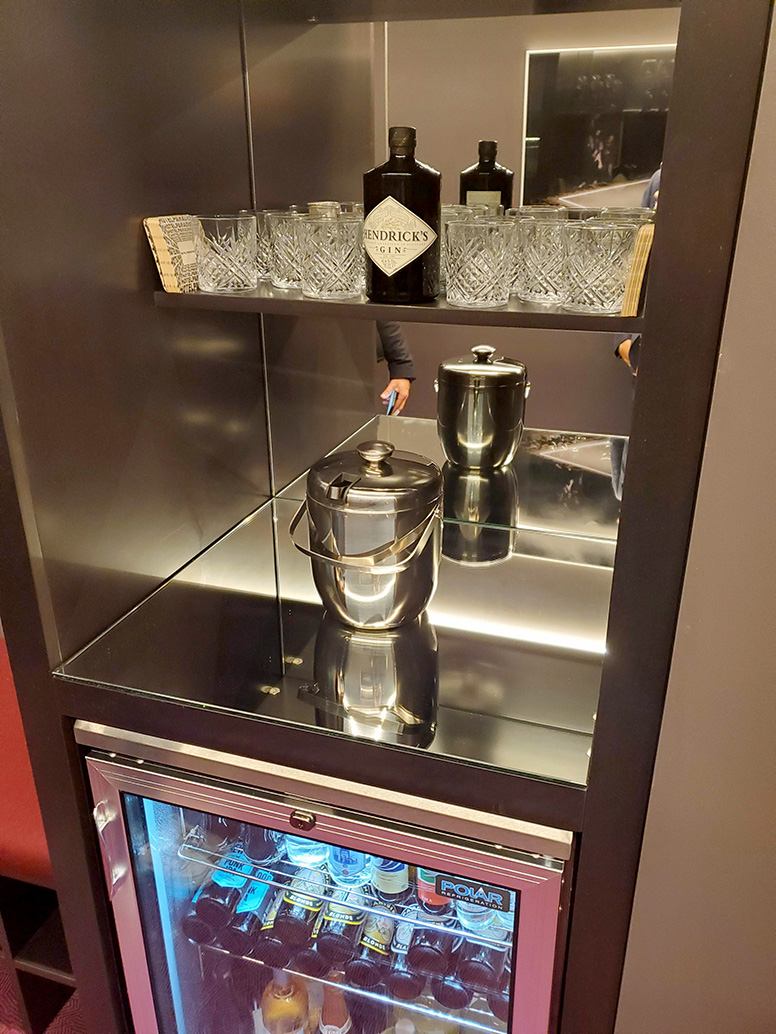 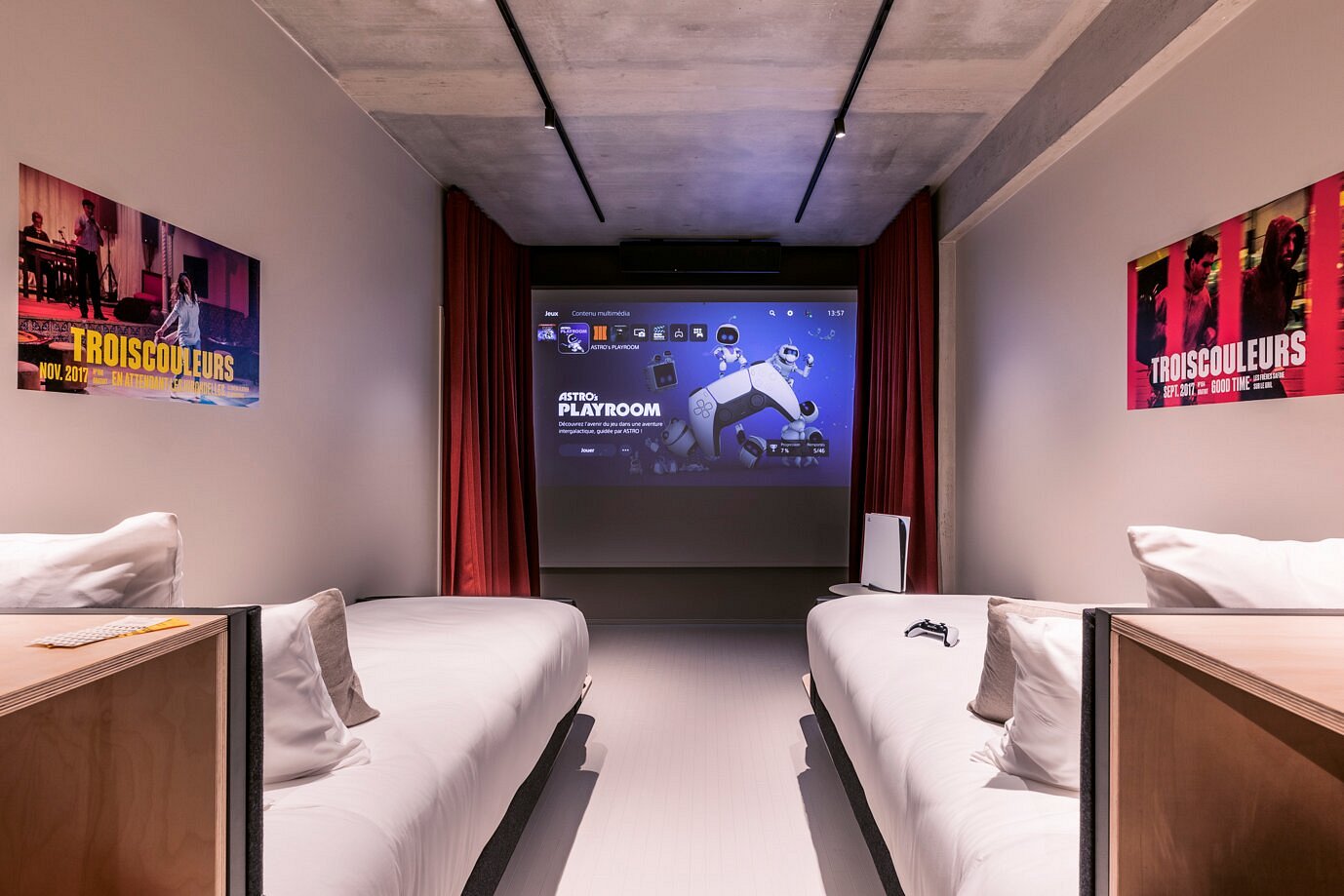 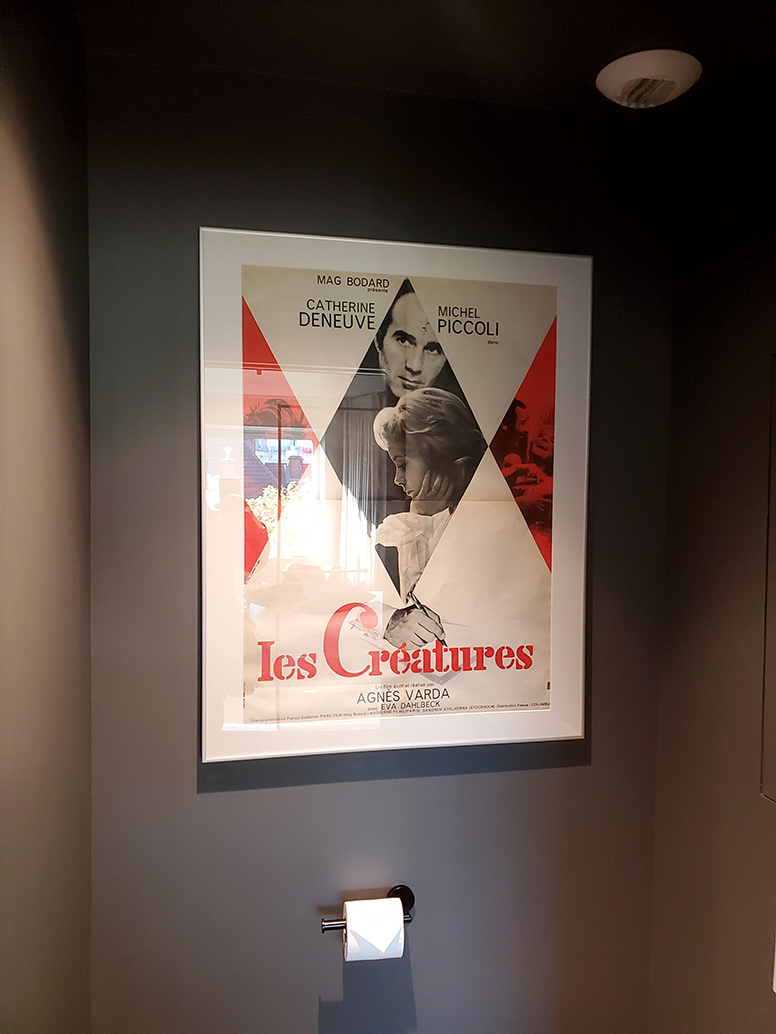 But opposite the karaoke room lies an even bigger surprise. Enter The Lodge and you find yourself in a dimly lit room for up to 12 people. Seat yourself in one of the parallel long sofas and as the curtains are pulled back you are looking down on the screen of one of the Mk2 cinema auditoriums. Yes, this is like having your own VIP box overlooking a big movie screen. It is perfectly soundproofed (I could tell, because “No Time To Die” was playing on the big screen) with the audio piped in through the rooms own speakers, so the audience below you have no idea that others are watching with them. Discreet luxury for those not satisfied with watching Bond in their hotel bedroom.

Talking to the manager, Thiebaut Jacques, after he took time out to show me around, it is clear that the hotel is more then just a cinema-themed boutique gimmick. While he jokes that they have created “a hotel where you will not want to go to sleep,” there is a deeper philosophy that underpins the entire venture. That vision, which is at the core of what drives Mk2, “is to continuously reinvent the cinema experience.”

Not every multiplex in the world might need a boutique hotel attached to it, but it demonstrates what is possible for cinemas by thinking outside the black auditorium box. If cinemas can be restaurants, bars, shops, bowling alleys, escape rooms and libraries (and that’s just at CGV), then why should they not incorporate hospitality into the cinema experience. 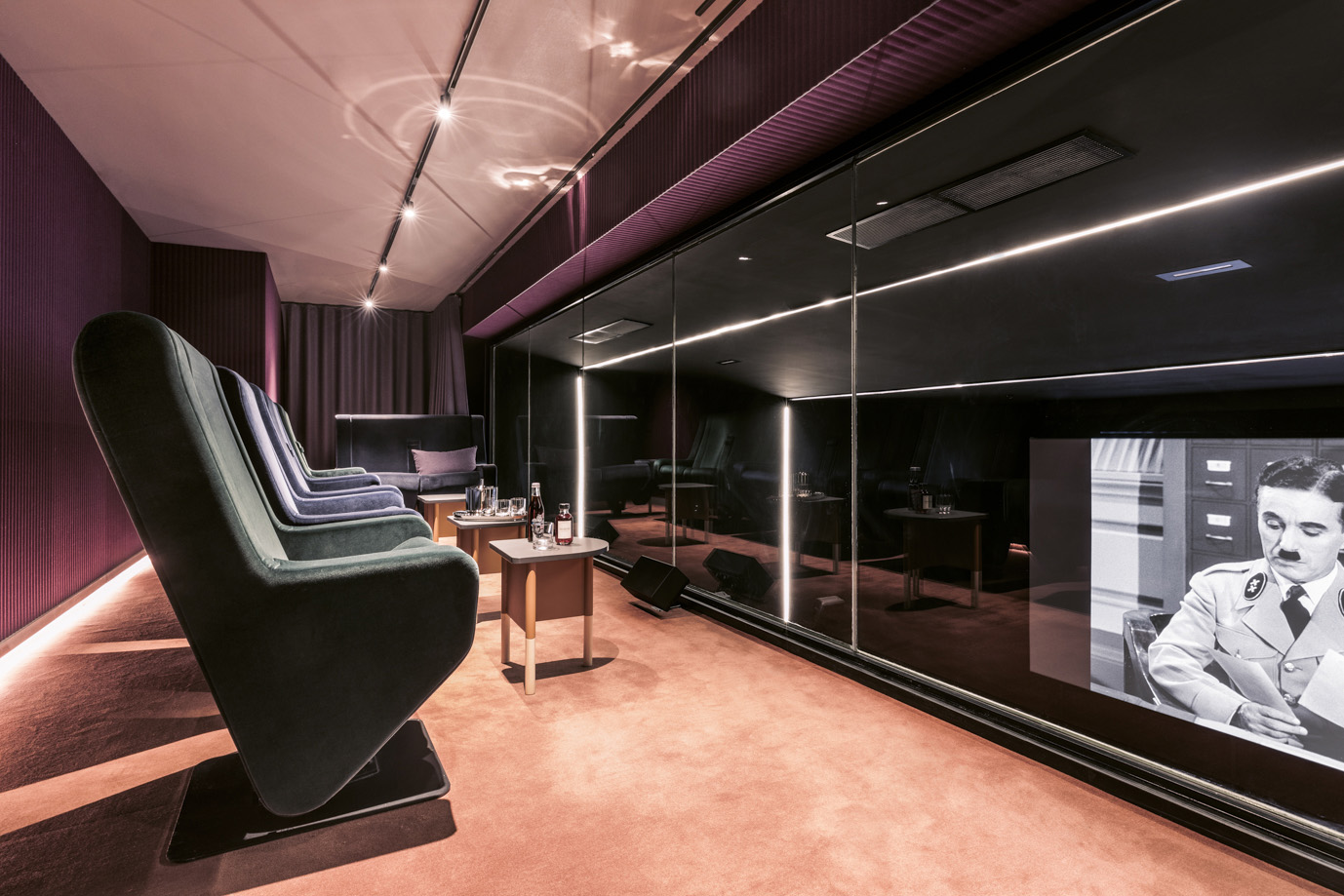 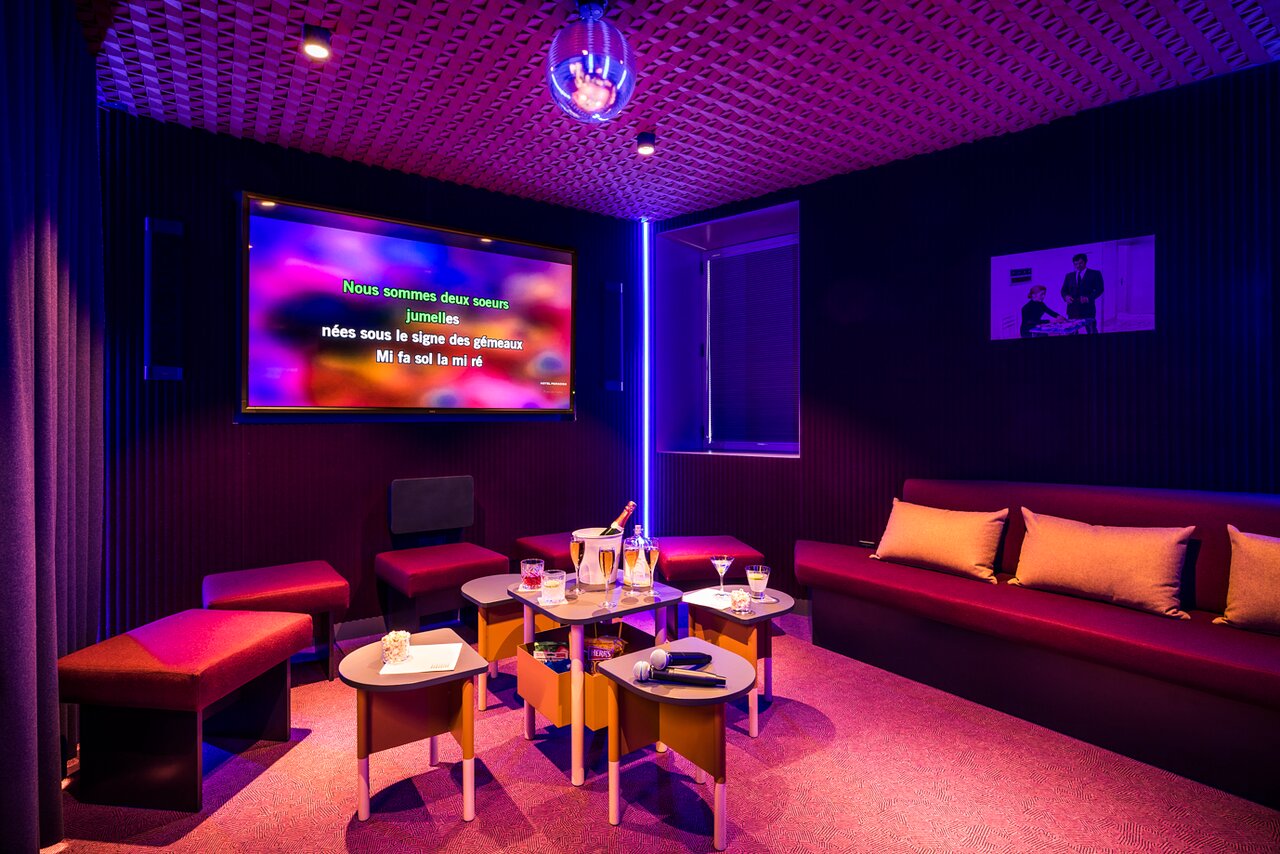 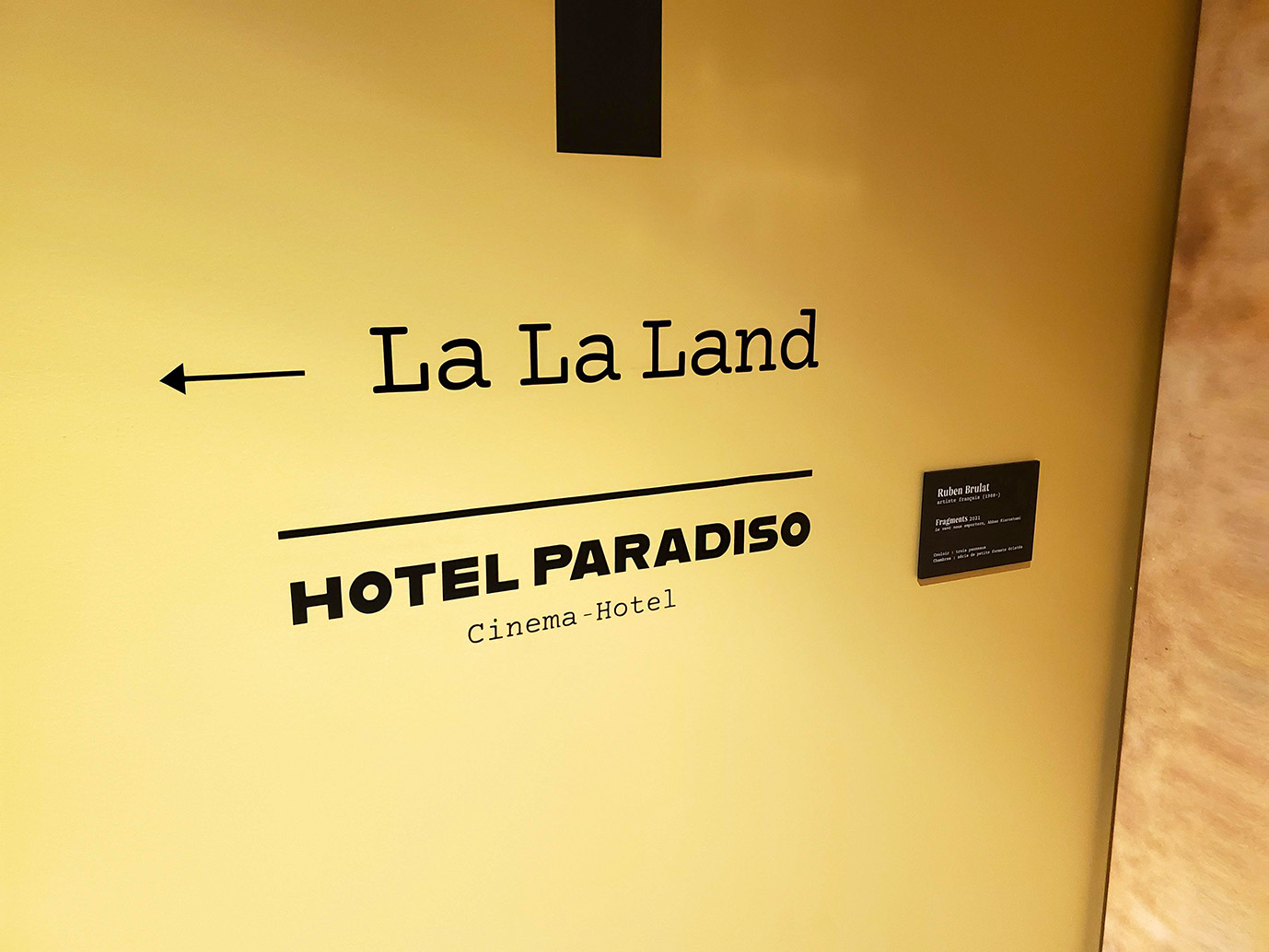 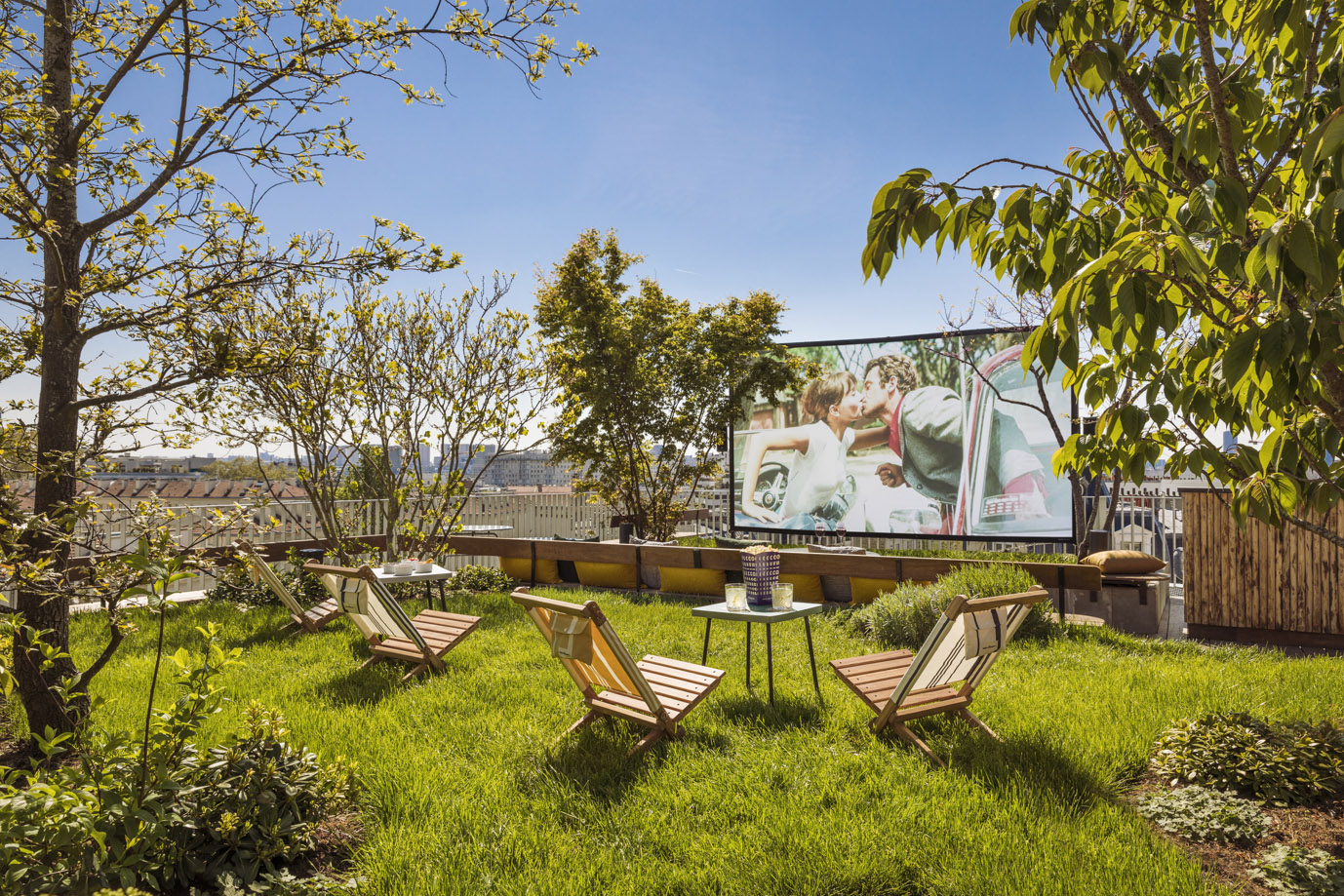 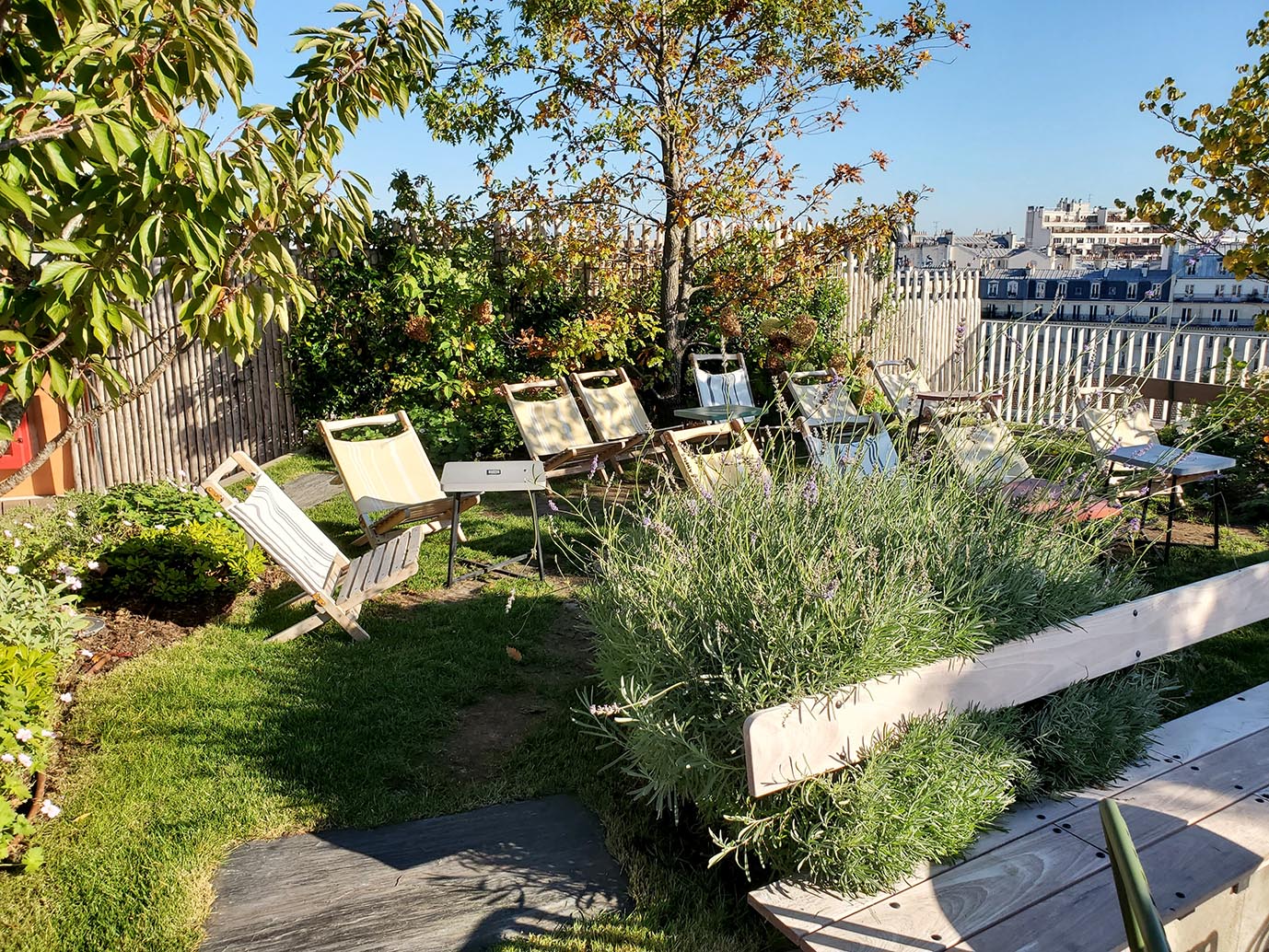 Secondly, Thiebaut emphasises, is to make the cinema experience relevant for kids and young people who come to stay. They might only know Netflix and “Case de Papa” (“Money Heist”), but what better environment is there to “widen their world” and for them to be introduced to Agnes Varda et al? A cinema operator that understands that the key to survival lies with cultivating new audiences is a cinema chain with a future.

Mk2 is said to be looking at other possible locations for the Hotel Paradiso concept. While refusing to be drawn out on possible locations, saying only that several discussions are underway, it might make sense for it to go to Spain next where Mk2 already has a cinema presence. However, it is a concept that would work equally well in almost any major European city, even if it will be a challenge to reproduce the cinema magic of a hotel that has the City of Light as its backdrop.