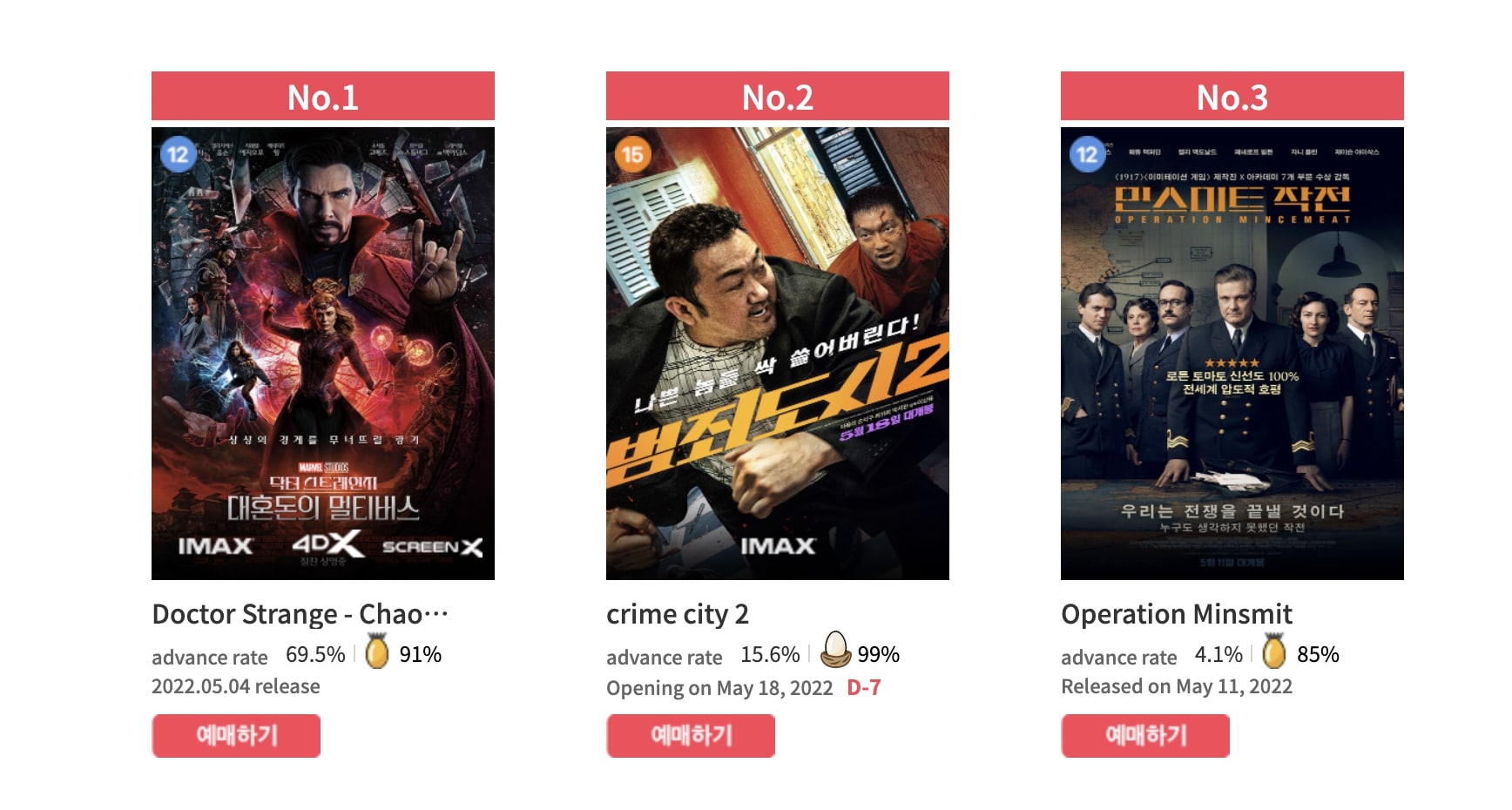 Disney/Marvel’s “Doctor Strange and the Multiverse of Madness” lifted the Korean box office out of its moribund state, attracting an 87% market share over the holiday, playing on almost 2,700 screens. Total viewing for the whole of May is now expected to exceed 10 million attendees, which would be a first in Korea since the start of the COVID-19 pandemic. Ticket sales had slumped in the previous months of 2022, dropping from 5.72 million in January, to February’s 3.28 million, March 2.8 million, and April 3.12 million, marking a disappointing start to the year.

Even though restrictions on seating and eating and drinking were lifted on the weekend of 23-24 April attendance saw a slump, due to the lack of blockbusters. Now as well as “Doctors Strange 2” there was also “The Bad Guys” which opened in Korea with USD $1.93 million over five days, across just 763 screens. Japanese animation “Butt Detective The Movie: The Secret of Souffle Island” in third place earned $835,000 in its opening four days from 664 screens. This week Korean blockbuster sequel “Crime City 2” is releasing and expected to lift the cinema market further.

According to Gower Street Analytics, the success of Strange & Co. means that South Korea has become the last major global cinema market to achieve Stage 4 and 5 box office targets (in one go!) on Gower Street’s Blueprint To Recovery. While South Korea did not close its cinemas in the early months of the pandemic and scored some success with domestic releases, the market saw a major dip in 2021 and early 2022 that has only now been reversed.

In addition to its other achievements, “Doctor Strange 2” has also become the first film in South Korea to achieve over one million admissions in a day since “Frozen 2” did in November 2019 on its tenth day of release. “Spider Man: No Way Home” earned USD $15.3 million in Korea in 2022, on top of the USD $42.8 million when it released in 2021. Ultimately Korean cinemas will need to do more to attract back not just audiences but also human staff.

Staffing Shortages Exposed by Stampede to Cinema
The success of the latest Marvel film in South Korea has not been without problems, however, with many audiences complaining about poor service at the multiplexes. This is because the major Korean cinema chain laid off a significant proportion of their staff during the pandemic. Cinemas are currently operating with only around half of their pre-pandemic staff levels, with no sign of the shortage being reversed any time soon. Attention is instead switching to increasing automation.

Korea’s largest cinema chain CJ CGV had 3,558 employees in 2021, compared to a pre-pandemic 2019 level of 7,068. The exhibitor cut staffing numbers significantly in 2020 when the pandemic took hold, dropping total staff levels to just 2,806. “We have been steadily hiring manpower this year to prepare for the lifting of social distancing,” a Korean cinema official is quoted as saying. “Even though the distance has been lifted, it is difficult to hire large-scale personnel as it will take at least several years for the average number of visitors to return to the pre-COVID-19 level.”

Partly as a result of COVID measures, but also due to staffing issues, Korean cinemas have switched ticketing to 100% electronic, including digital kiosks on site. There is also a pivot to smartphone ordering of concessions, as well as mobile ticketing. Some Korean cinemas have even experimented with robot greeters that can point customers to their chosen screen.