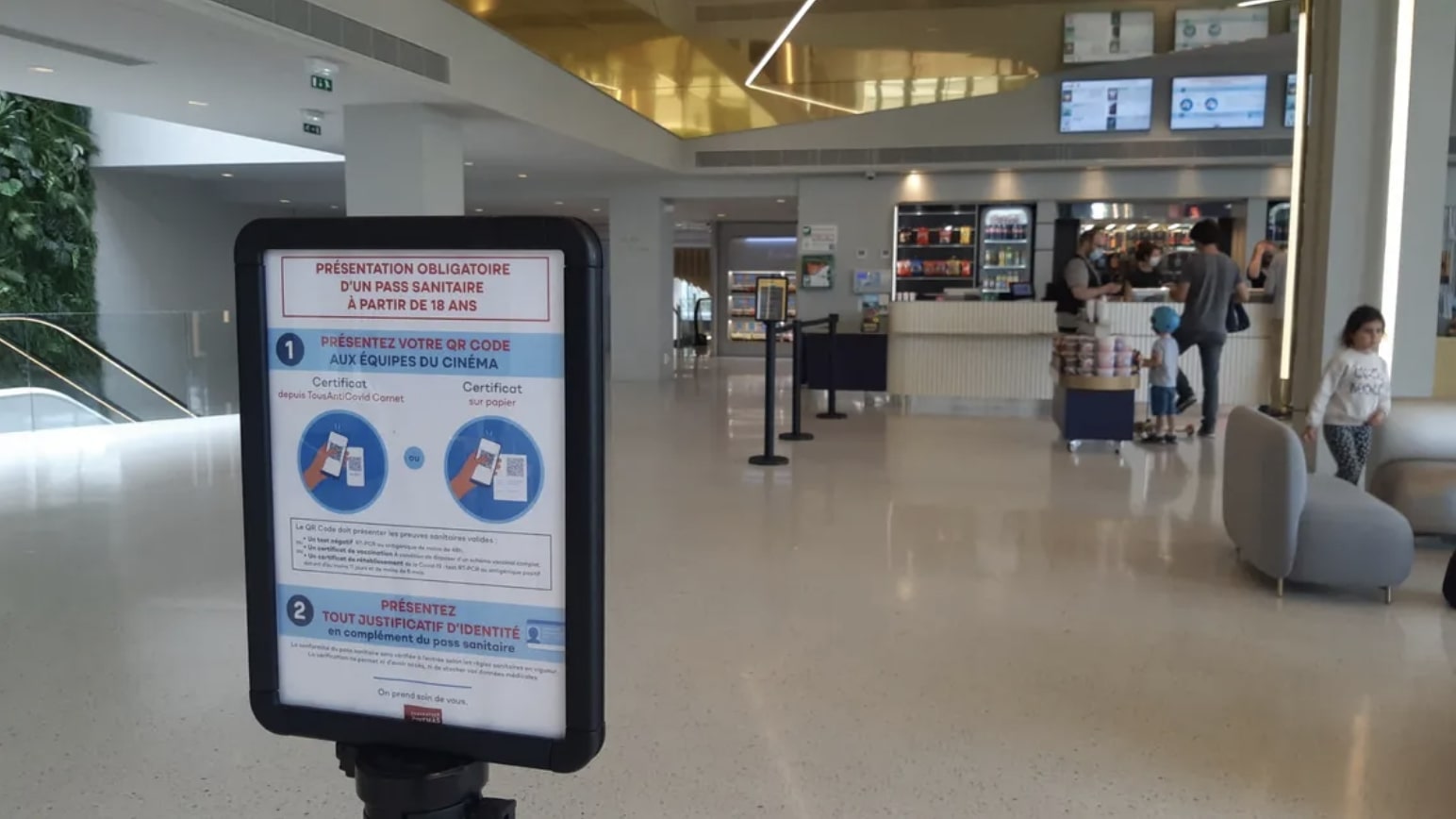 The introduction of an EU Health Certificate (a.k.a. ‘vaccine passport’) requirement to attend cinemas in France has led to a ‘free fall’ drop in attendance. The news is a blow to French cinemas, which had experienced a steady growth since reopening earlier this summer after more than 300 days of closure. Many industry figures are now calling for government support or a rethink of the measures. Even so, other European countries are considering introducing similar requirements for cinemas, other cultural venues, bars, restaurants and even public transport.

France mandated that from Wednesday 21 July an EU Health Pass (a QR code on your phone showing vaccination, test or recent recovery from Covid) is required to attend cinema screenings of more than 50 people, as well as for other cultural venues, such as the Louvre museum. This has led to a sharp drop in cinema attendance, as well as anger from the industry. According to Comscore France, the drop off was 70% on the day that the measure was introduced.

According to Adèle Taktak, retail manager at Les 7 Batignolles cinema in the Paris’ 17th Arrondissement, “We unfortunately had to refuse access to certain people because many were not aware and did not understand that it was from Wednesday July 21 to the cinema and not from August 1,” which is when the requirements come into force for bars, restaurants and hotels. “Having to plan to have a PCR or an antigen test before going to the movies is far too restrictive for people to want to take the plunge,” Ms Taktak adds, speaking to France Inter.

Cinema operators complain that, similarly to hospitality venue operators, they too should have been given more time to prepare. They are now calling for support measures from the state. The National Federation of French Cinema (FNCF) has requested a “massive emergency aid for cinemas” to support cinemas’ continued operations. There are also calls for furlough payments to be reinstated for cinema workers that find themselves with few customers to serve.

Quoted in FranceInfo, Michèle Halberstadt, director of the company ARP Sélection says, “The over 50s, who are the best vaccinated and protected, are those who have returned the least and there is a 50% drop in this audience… One wonders if it is not better to keep the theaters closed, to keep the films on the reels and in the cupboards than to take them out in empty theaters.” One of the films that has suffered the most is the Cannes Palm d’Or winner “Titane”, which was released just before the new regulations came into place and saw attendance plunge 70%, having previously doubled when it was announced as the winner.

Some French cinemas have decided to cap attendance for all screenings at 50 tickets. “Since this weekend we have been showing screenings without a health pass in most of our cinemas, but limited to 49 people while keeping physical distancing and masks,” says Sylvie Faroud, manager of new cinemas in the Auvergne Rhone-Alpe region, to France Bleu, adding that “the guidelines are incomprehensible and inappropriate.” Olivier Durant, the owner Le Concorde cinema in Moissac has adopted the same strategy, stressing to La Depeche that he is not against vaccination or the health pass per se. “It would have been too complicated. We calculated that this would have added 30 additional minutes at the cash desk to enter a room by checking the pass, the identity… It’s a pragmatic decision,” he says. Instead he has programmed more screenings of popular films, such as local comedy “Kaamelott: Premier Volet,” to make up for the seating caps.

The cinema sector is calculated to have lost eight million euros between Wednesday 21 and Sunday 25 July, compared to the same period the previous week. “It is, of course, the double of the equivalent weekend of 2020,” says Éric Marti of Comscore France to Ouest France, “but the outputs of the week are below the expectations of the distributors and the continuations show a vertical drop of more than -70%!” In this situation small cinemas are faring slightly less badly. “Large cinemas are the most affected, with a drop in attendance of around 60%, because their clientele is younger,” explains François Aymé, President of the association of arthouse cinemas. “Half of [France’s] population is not yet vaccinated, especially young people.” A youth-skewed film such as “F9” lost 92% in its second Wednesday and ended the weekend 87% down. Upcoming blockbusters such as “OSS 117”, scheduled for 5 August, may have their release postponed, dealing a further blow to cinemas.

Will other countries follow?
So far Greece is the only other EU country to have mandated the EU Health Certificate for entertainment, culture and/or hospitality venues, with Italy set to follow on 6 August for both indoor and outdoor venues. “If on the one hand, in terms of safety, it is a provision with the advantage of creating Covid-free locations, on the other I remain perplexed about the sudden change in the rules,” says Franco Calandrini, one of the founders of the Start Cinema cooperative that has been managing the programming of the cinema arena at the Rocca Sforzesca to il Resto.

The so-called Green Pass is not mandatory for children aged 12 years or younger, but with no vaccination for any under 18s in Italy, this precludes a big group of the key cinema demographic. In Germany there have been calls from senior politicians of the governing CDU party that even those that have been tested but are not vaccinated should not be admitted to cinemas, restaurants and other public venues.

Writing exclusively in Celluloid Junkie in March of this year, Phil Clapp CEO at UK Cinema Association and President of UNIC, stated that:

Making ‘proof’ of vaccination a requirement for entry would therefore in and of itself be discriminatory and – the [UK] government having decided not to make vaccination mandatory – in essence pass the role of enforcement down to public venues. Having expended huge effort and resource in making cinemas more accessible in particular to disabled audiences over the last decade, this would be a huge backward step when the escape of the big screen is now needed more than ever.

Even if that was straightforward, we remain solidly opposed to the idea, believing that it is wrong to ask someone to prove they have had a medical procedure in order to enter what is supposed to be a place of relaxation and enjoyment.

At the moment there are no plans to make a health certificate a condition of entry to UK cinemas, though mask requirements and other restrictions remain in place. However, with the Delta variant surging in other parts of Europe, other countries could look to follow France’s example. Meanwhile everyone is watching what is happening in Europe’s largest cinema territory closely.

On the ground the anger and resentment amongst French cinema operators is palpable, specifically regarding the lack of clarity and support from the French authorities: “It’s too complicated to understand, it’s too complicated to set up; people prefer not to come and wait to see how it goes,” says Arnaud de Gardebosc, boss of the Grenoble-based company MC4. “I am angry because I have the feeling that we are guinea pigs.” A decision about the future of the requirements will be made on 1 August.