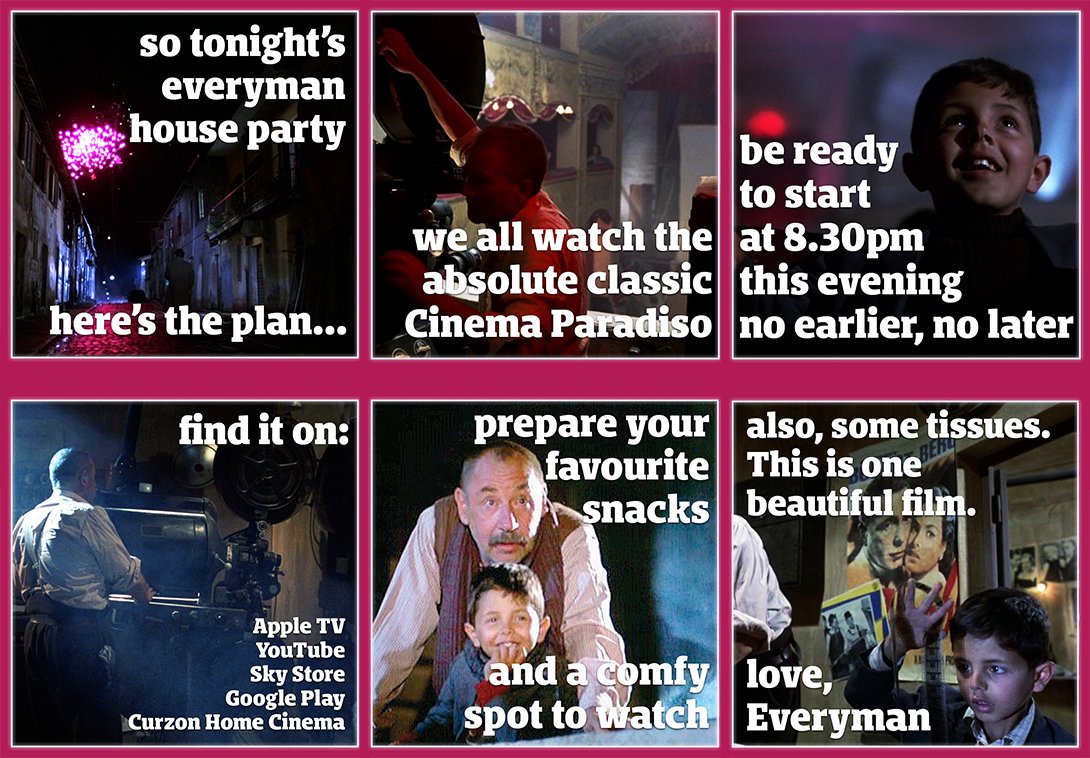 If you were to run a poll amongst cinema-goers worldwide asking them why they go to the movies, the result would overwhelmingly be a combination of escapism from the real world and the social experience. As a sector that can temporarily no longer meet either of those objectives, it has never been more critical to find innovative ways of engaging with customers.

In the third #CJCinemaSummit held last week, this topic was explored in detail. How can a business that prides itself on providing an unbeatable out-of home experience do the exact opposite? How do you avoid disengaging customers along the way? The secret, it seems, is community.

Maintaining a Sense of Community

The entire reason I built theaters in the first place was to bring people together in a celebration of film. Our theaters are currently closed, but that doesn’t have to mean our communities have to remain shuttered as well. We intend to hunker down, weather this storm and reemerge on the other side. Until then, we’ll continue to work to share the movies we love with this community, and find ways to support each other.

For cinema owners it is vital to keep the connection with customers alive even when they don’t have any films to screen. People are consuming their highest levels of content within the home (through necessity rather than through choice), which will only have positive consequences when cinemas re-open, and communication with content consumers is crucial.

Filmgrail’s Founder and CEO Simon Souyris-Stumse explains why this is so important. “In a unique situation like this, people are more likely to be forming new behaviours. People are flocking to online communities and forming different habits online. Just being in those communities with some content is enough to be part of those new habits, and for them to stay top of the mind for them”.

A quick visit to the facebook page or twitter feed for any cinema operator will reveal clean feature images or pinned posts explaining that they are closed, followed by a flurry of activity. Quizzes and polls, film recommendations and even WFH tools (Paramount Pictures upped the Zoom game with a fantastic “Top Gun: Maverick” and “Spongebob Squarepants Movie” background, as did Pixar) – there’s lots to be talking about. But is it all relevant?

In short, no. As we have discovered, there is incredible value in creating an online or virtual community, fostering new habits amongst existing and new audiences. But, there is also another incredibly important reason to maintain frequency of communication: SEO.

“It’s important to remember that your ways to reach these communities – Facebook and Instagram – are powered by algorithms” explains Souyris-Stumse. “And if you don’t post for a long time, the reach that you have built up over years will be lost”.

The Boxoffice Company president Stan Ruszowski agrees. Algorithms are “crucial to driving traffic to a theater’s websites and various social platforms. If you stay silent for the next two months you’ll be dropping the algorithms. And that might be pretty painful – you’re going to have to restart and regenerate all your work on that side.”

So being ever present with a bit of content is important. You don’t want to be pushed further down the page as when you do re-open; your posts will not be viewed by as many people.

“This is an opportunity for cinemas to be sharing some content that wouldn’t be a priority when cinemas are open and there are new movies coming all the time. An opportunity to communicate about a new cinema hall, a refurbishment, the cinema history or staff. These are things that will deepen your relationship with audiences and build excitement for when you open up again. One thing for certain is that people want something to look forward to” observes Souyris-Stumse.

So with that in mind, what exactly is the best way for cinemas be communicating to patrons?

“Not all people who follow your page will see all posts unless you pay to promote them, and that’s probably not what people want to be spending their money on right now. You can get around this posting Instagram and Facebook stories – which are viewed by a greater number than posts – and by focusing on your own channels that you have at your fingertips”.

In a quick poll of over 400 participants of the third #CJCinemaSummit, email was found to be the most popular tool to reach audiences:

A final piece of advice: “don’t overdo it on those channels”. Everyone is fighting to talk to their audience and there are a lot of very similar sounding emails arriving in personal inboxes right now.

Having understood the how and the why, the question then is “What”. Fortunately, cinema exhibitors appear to be a creative bunch. Understandably, smaller independent chains with only a few sites are better placed to be nimble and adapt business models quickly, but that’s not to say that larger exhibitors aren’t putting their thinking caps on either. There have been some fantastic and innovative ideas to continue to engage customers – here are some of our favourites.

Alamo Drafthouse had a ready made initiative at their fingertips. The company prides itself on its curated approach to programming, and Terror Tuesdays and Weird Wednesdays lent itself perfectly with little adaption. Known as Alamo-at-Home, they recommend a film, which you can watch at the virtual cinema (Vimeo) for USD $7.75 complete with pre-show content, introductions and post screening discussion as part of the package. The icing on the cake? They are making the recipes for their much loved (and much missed) snacks available online.

Alamo have also partnered with the much-discussed Kino Lorber as one of their 150 virtual venues.

Showcase Cinemas in the U.S have rolled out an initiative directly linking coronavirus and the movie world. As VP of Global Marketing Mark Malinowski explained at the #CJCinemaSummit, “superheroes don’t just exist the movies”. They are asking customers to send in a video of themselves dressed up tagging #superheroshowcase and nominate their very own “superhero” – medical staff, key workers etc. The winners will be featured in their pre-show when they re-open. The illustration for the campaign was created by Singaporean artist Josef Lee, who originally created the piece as a tribute to healthcare workers in Wuhan.

According to Malinowski, their film “matchup” game running on their own Facebook page is the most highly engaged campaign that they have ever run. Showcase intends to roll both campaigns out to National Amusement’s U.K. locations at a later date.

A small city-centre cinema in Germany’s Buxtehube has sold over 100 tickets to ‘ghost screenings’. The closed cinema is offering symbolic tickets for a Pyjama-Party (€10), Ladies-Night (€15) or Horror-Night (€20) “screening” as a means of supporting your local cinema. Not actual film is shown (the projector is dark), but it works in terms of the existing ticketing software solution, without having to split the fee with a distributor. The idea was suggested by a customer and the cinema jumped on the idea, with terrific response form patrons.

We’ve already praised Everyman Cinemas in the UK for their communication to their customers on social media, using fun yet fitting film stills and quotes. It should therefore come as no surprise that their customer facing initiatives during these times are no less creative. As ‘House Party’ has become as synonymous with lockdown as, well, lockdown itself, #EverymanHouseParty is now the weekly event to be seen at (or rather, be posting about). They recommend a film and provide options to stream, and food and drink suggestions with recipes to be shared online. There’s even the classic Everyman screen announcement pre-show.

In a wonderful display of unity, Cinema Nova in Melbourne, Australia are using their Facebook page to showcase the creative works of some of their team members and links to their Etsy shops.

For a decade, Curzon Cinema (UK) has been at the forefront of VOD with their unparalleled business model and uniquely curated approach to programming. From Oscar winning success to cinema closure in less than a month, they thought on their feet and quickly. Already used to hosting live Q&As they quickly adapted the format to stream live on their own platform, Twitter, Facebook and YouTube channels.

And without a doubt, our favourite customer communication so far with little purpose other than to spark joy, is Marcus Theatre’s celebration of #nationalpuppyday on March 23.

Hopefully, in the not too distant future, the focus will shift from customer communication filling a void to gearing up for re-opening. Much of this content will be necessary: dates; health and safety procedures; possible social distancing measures; any pricing initiatives and of course, promotion of the films that will be on screen. So now is absolutely the time for playful-ness and innovation before your posts become more informative.

It is entirely possible however that there may be either a Global or Nationwide initiative to celebrate the big screen experience. Just think about the reach your cinema could have for that campaign by continuing to communicate effectively to your audience over the next few weeks. That is, after all, the main feature. What’s happening now is merely the pre-show.