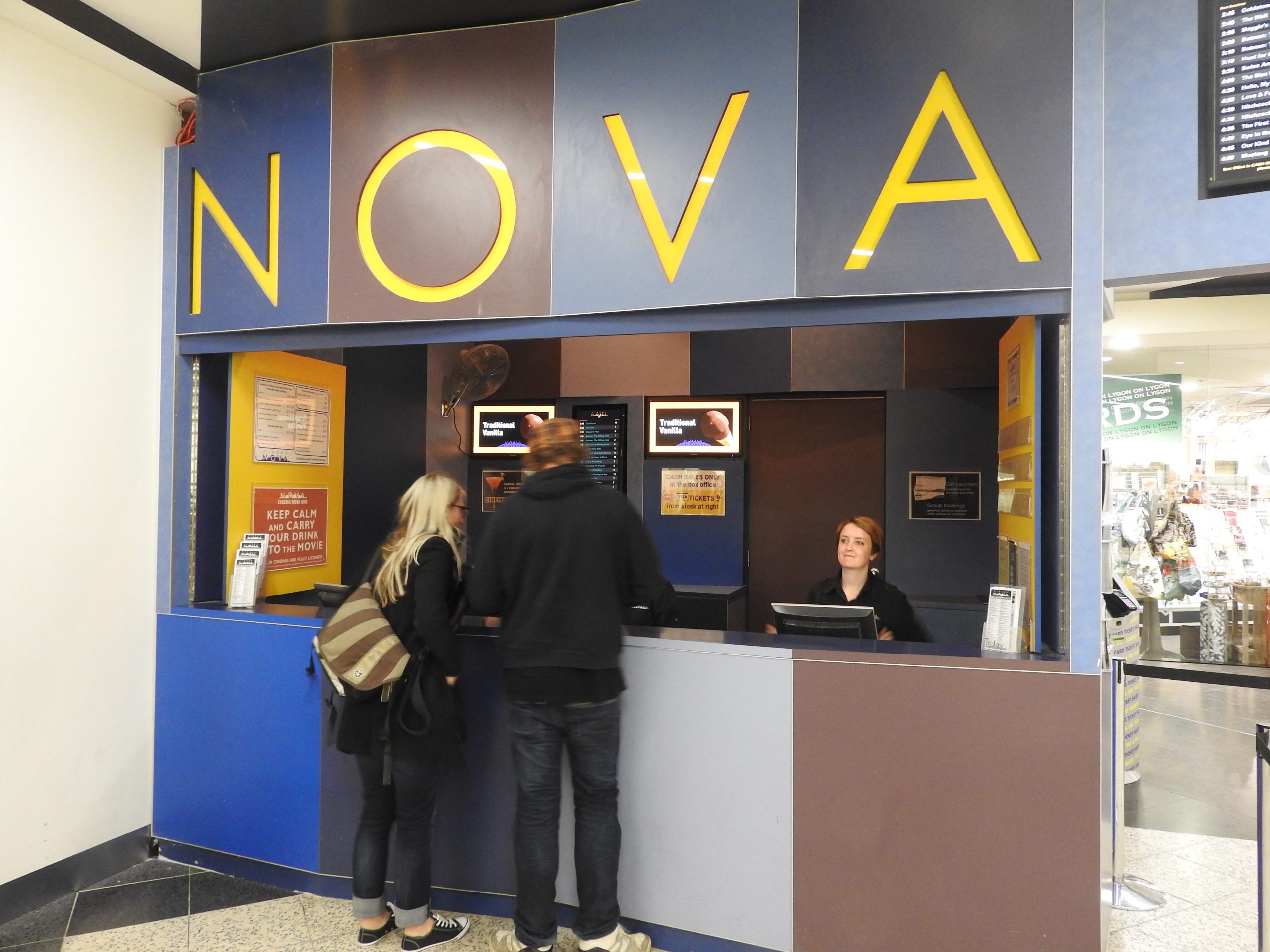 An industry colleague joked with me that if Cinema Nova could find space for four seats under a stairwell it would probably install a cinema screen there. Having wandered the corridors, stairs and halls of Melbourne’s leading independent cinema, the venue is best described as a-maze-ing.

You could equally well describe it as quirky, elegant, full of personality and passionate about films. Above all Cinema Nova is probably the best art-house multiplex in the Southern Hemisphere. It is like an on-demand service for all the latest film releases, but on a large cinema screen instead of a TV, together with a great bar and management that genuinely cares.

Growing, growing, growing; keep them screen a’growing
Cinema Nova’s humble origins stretch back to a modest two-screen arthouse that opened in 1992 (the same year that “Strictly Ballroom” and “Romper Stomper” came out) on the north end of Lygon Street, better known as Melbourne’s Italian restaurant district. Just two years later it doubled in size, adding a fifth screen a year later. Screens 6, 7 and 8 were added in December 1999.

In 2004 Nova not only added three more screens, but also became Melbourne’s first 100% digital cinema. When the multiplex turned 18 in 2010 another four screens were added for a total of 15 auditoriums. The current number of screens is 16, with the most recent auditorium opening in 2015, featuring luxury leather seats.

Rumours that a broom closet near the ladies loo is being eyed for a 17th screen are apparently not true, though this does not mean that more screens might not happen in the future. However Cinema Nova is not so much defined by the number of auditoriums as what it shows on those screens, as well as what goes on around it.

A Jewel in the Crown of Carlton
Approaching Nova you could be forgiven for initially assuming it to be just another multiplex shoehorned into a small shopping centre. There is a sign and a few posters at the entrance to the mall, as well as a box office on the ground floor separated from the cinema, which is reached by taking an escalator one floor up. But the tell-tale signs that this is something special are all around you.

For a start, it is located in the trendy Carlton neighbourhood, just a few blocks north of the Melbourne Museum and east of Melbourne University. The area is a foodie’s heaven, not just for restaurants, but also wine bars, gelato parlours, fromageries, coffee hangouts, spice shops, vintage clothing and independent book stores, with nary a chain-store or fast-food establishment in sight.

Opposite the escalator to reach the upper floors of Nova inside the shopping centre is the Brunetti Carlton, the stalwarts Italian cafe for meals and cakes, perfect in the words of a customer for “a late night espresso and a cheeky biscotti or two!” after the film. But we are getting ahead of ourselves.

Films, films, films and more
The first clue about the wealth of cinema treasures that Nova holds comes as you approach the stand-alone box office. To say that the art-house multiplex shows a lot of films is like saying that there are a few things you can watch on Netflix. We don’t mean over the year or even in a week, but every single day offers a nearly overwhelming choice.

The best analogy for Cinema Nova is a well curated book shop with a broad selection, but also a wealth of staff picks and recommendations. Yes, there nine screening of “Absolutely Fabulous: the Movie” on Saturday, but there are 25 other films you can pick form the Friday before that. That’s correct, 26 films across 16 screens in just one day.

These include ‘Nova Exclusives’ such as “The Clan” from Argentina and the documentary “Hitchcock Truffaut”. More mainstream fare like “Finding Dory”, “Me Before You” and “High-rise” mingle with obscure or niche offerings like “Tickled”, “Truman” and “Embrace of the Serpent”.

If you think that the screenshot above gives an overview of all that’s one – we couldn’t fit in the three films/events at the bottom, so here they are:

Only one of these is a film. As you’ve probably guessed already, Cinema Nova doesn’t just show films but also event cinema such as NTLive and the Metropolitan Opera, Q&A screenings with film makers and CineTrivia nights.

Concessions & Bar, or, Why Not Have A Bottle of Wine With Your Bucket of Popcorn?

Upon arriving to the top of the escalators you immediately find yourself in the warm embrace of the Cinema Nova concessions bar. In any other cinema a queue as long as the one snaking to concessions bar here would be a sign of poor POS implementation or slow service from under-staffed zero-hour contract teenagers sagging next to the soda dispenser. Here it is a sign of the popularity of the offering and the line moves quickly.

It also helps that the back of the line can be found in the bar area, just a few steps down to the left. If you have arrived early enough for your film, you are sorely tempted to sit down for a coffee or possibly something stronger. The Nova Bar was introduced in 2011 after extensive renovations to the cinema, priding itself on serving a wide variety of cocktails, local and imported beers, wine and spirits.

This is the perfect hang-out spot before or after the film, to engage in deep conversations about your favourite film, director or actor, under the eclectic choice of film posters that adorn the walls. Feeling hungry? No need to leave. Four years ago Nova introduced Nova Deluxe, an in-cinema dining experience with a choice of one or three courses, with table service in the cinema as an option.

Once you reach the concessions stand there is lots to chose from. There are sandwiches casually wrapped in clingfilm, for those hungry for something more than snacks, or pastries if you have more of a sweet tooth. The back is stacked with bags of local chips, ranging in favour from Sea Salt to Humous.

The obligatory choctops (ice cream with melted chocolate frozen on top) are not any old choctops, but Signature Artisanal Choctaws, Voted the ‘Best in Melbourne’ the signboard announces. There is M&Ms, Maltesers, Ben & Jerry ice-creams and of course Coca-Cola. There is cans of beers, glasses of wine, small bottles of sparkling wine and full bottles of wine. And as the sign assures, ” YES You can take your drink into the movie.”

The popcorn is freshly made, generously sized and judging by the taste probably uses high ingredients such as coconut oil. This is some of the best popcorn you will taste in a cinema. Above all, the prices are very reasonable. Particularly the combos, which include:

The staff are friendly even when they serve you fast and efficiently. This is a model of what a good concessions bar should be like.

Making Your Way to the Movie

You could be forgiven that you might need a map to find your way to the right screening auditorium, but Nova does not skimp but has a Front of House staff member who seems as much there to check your ticket as to point you to your proper auditorium. The locations of the films are not just signified by the screen number printed on your ticket, but also with mini posters of the film under the corresponding screen number with a helpful arrow.

I attended a special screening of “Batman: the Killing Joke” animated feature film (with Mark Hamill returning as the voice of the Joker), which was given a one-off cinema outing prior to releasing on DVD, Blu-ray and online. Before the presentation a staff member came and spoke to us ensuring that we were at the correct screening as another had been added, due to popular demand. I’m not sure if each screening has a personal introduction at Nova, but it is a smart move that other cinema chains have started to employ.

The picture and audio presentation were both of a high quality (notice the large egg-shaped speakers), though the second row from the screen felt like just under one screen-height’s distance and slightly too close for comfort. The atmosphere was good, even as people got up and shuffled back into their seats with wine and snacks in hand.

It was tempting to stay afterwards and linger in the bar, but it was getting late and there were simply too many foodie treats nearby not to take advantage. A particular recommendation is the Pidapipò Gelateria, which serves home-made ice cream and sorbets. The caramel flavour ice-cream is a great way to finish the evening.

Visit Nova Cinema online, to get a flavour
For those of you who are not planning to visit Melbourne (you really should), it is possible to get a flavour of the friendliness and fun of the Cinema Nova just from their website, and particularly their FAQ, which has gems like this about Mother-Baby screenings.

Q: Do you have Cry Baby sessions?

A: We do not have cry baby sessions as such, however you are more than welcome to bring your child to any of our sessions (aside from R18+ films). We recommend morning sessions on weekdays or weekends (aside from our Discount Day – Monday – due to anticipated crowds).

Or why there is a bird next to the comments box (and we don’t mean a Twitter bird symbol):

Q: Why is there a bird perched over the comments box in the foyer?

A: Hand crafted by a renown local artist, our cormorant is both loved and loathed by customers. In fact, “pro” and “con” notes about the cormorant are the most common comments found in the feedback box. Makes you wonder whether people would even notice there is the option to provide feedback were there no cormorant at all!

It might be impossible to replicate what makes the Cinema Nova so unique. Unlike, say, Alamo Drafthouse it is not something that you can easily bottle and franchise. The cinema was very much born out of its location, both the city and the neighbourhood, mushrooming quickly in one place but always true to its initial vision and roots.

Although there are aspects of the cinema that could serve as an inspiration for others, Cinema Nova is best enjoyed on its own as a unique and very enjoyable evening out in a city that is never short of fun things to do.

As for the jest that Cinema Nova would fit four chairs and a screen under a staircase if it could, this is simply not true. Having made my way to the toilets down lengthy stairs and corridors I can confirm that they are not only clean and tidy, but they could also easily be split into at least two more screens if the management should so chose.