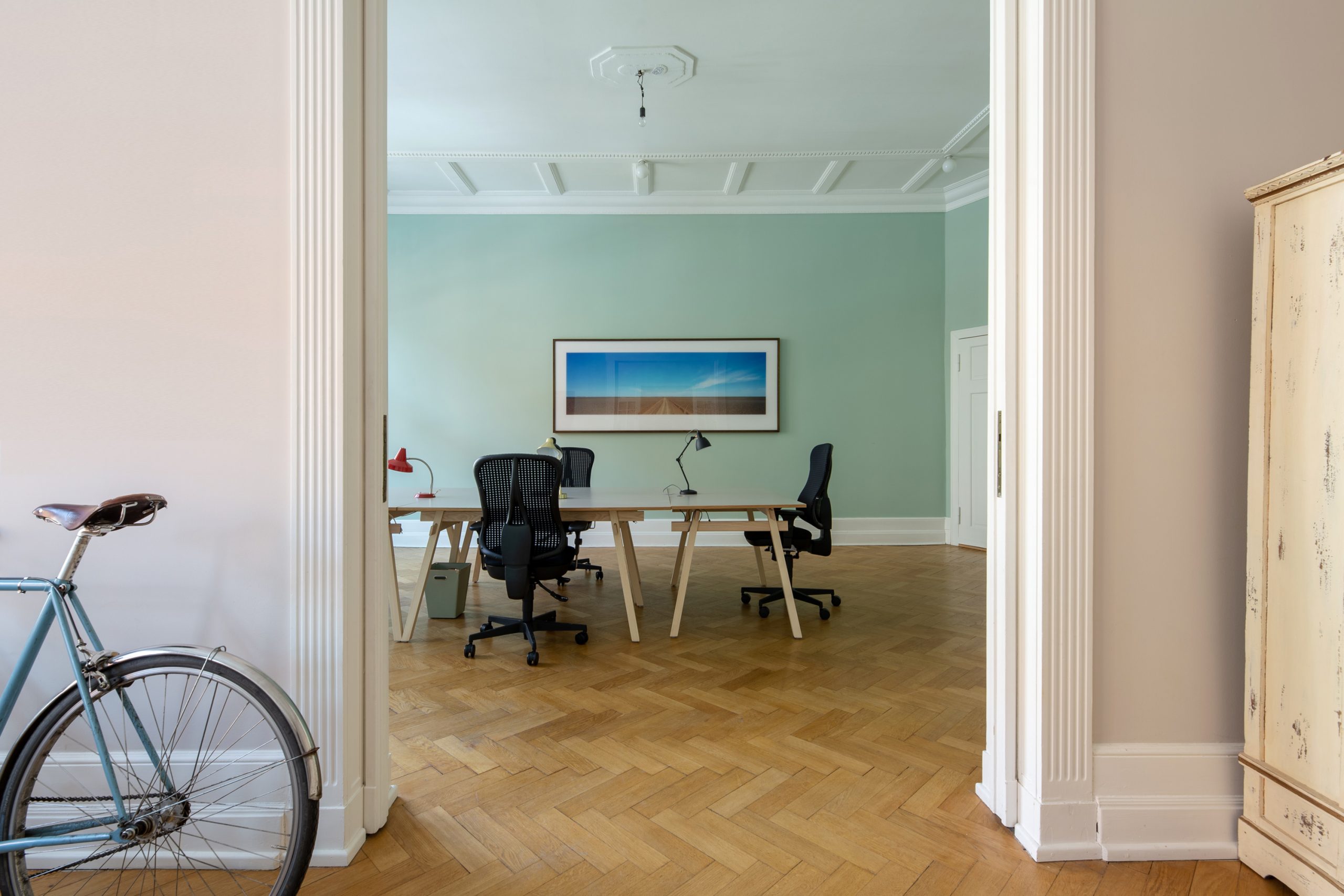 Germany’s capital is making a name for itself in the cinema technology field, with companies like smart Pricer and Greta & Stark calling Berlin their home. One company looking to tap into and accelerate this market is the FilmTech Office, initially based in the former Tempelhof Airport but now in its own trendy office space nearby. Celluloid Junkie spoke to the company’s co-fonder Erwin M. Schmidt about bringing together “creatives and entrepreneurs in a curated environment where film production and distribution meet blockchain, big data and artificial intelligence.”

Celluloid Junkie: Can you tell us a bit about the FilmTech Office?

Erwin M. Schmidt: We have been organizing the monthly FilmTech Meetup Berlin since Summer 2017, and very quickly we had a cool community of people exploring the touchpoints between film, media, music and technology. We started the Meetup out of pure interest in the subjects we were exploring. But when my business partner Gian-Piero Ringel and I were looking for an office space at the end of 2017 we thought of creating a place that could host more people than just the two of us. We wanted to create a creative environment where different people could work on their film & tech projects, inspire and support each other and, and if possible, also collaborate.

The idea of the FilmTech Office emerged quite naturally and intuitively from our involvement in the FilmTech Meetup. We tested the idea with people from our Meetup community and the response was very positive. Then we went ahead and crated the place, which we call “a shared office for creatives & entrepreneurs in film, storytelling and tech”.

CJ: What is your background and how did that shape the idea of the FTO?

ES: Gian and I are both film producers, we know each other from film school (Deutsche Film und Fernsehakademie Berlin) and have worked together for many years in Gian-Piero’s and Wim Wenders’ company, Neue Road Movies. We share a passion for cinema and great stories and are fascinated by technology and the methods and strategies start-ups use to develop their products in alignment with the needs and wants of their customers. We want to apply some of the lessons learned onto the greater context of film production and distribution.

CJ: Why did you decide on Berlin as the location and what is the city like for the media industry?

ES: Berlin is where we live and work so the decision to open the FilmTech Office here was really natural, we did not even consider other places. Berlin is a great place to be connected with the newest trends in start-up culture and technology, there is a plethora of possibilities to immerse yourself in a vibrant, international community across all disciplines and backgrounds, it has an active creative scene, is home to major film schools, film financing bodies, the Berlinale [Film Festival]. There could be no better place for us.

CJ: You’ve been running the Outlook Series of keynotes seminars during the Berlinale and the FilmTech Meetups since last year workshops. Can you tell us a bit about them and what type of subjects they have covered?

ES: The Outlook Series was a series of five key notes by visionaries working at the intersection of film and technology, held on 5 consecutive days during the Berlinale 2018, organized in collaboration with the German Film Producers Association (of which Gian-Piero is a board member). The FilmTech Meetup on the other hand is a community event held with religious steadiness each month since last summer, the upcoming edition being FilmTech Meetup #11.

The questions we explore (and will continue to do so) in these formats are quite similar: how will technology influence the way films are produced, distributed and experienced, which are the current trends at the touchpoint between film and technology, which projects have achieved major milestones (or failed attempting to do so), who are the visionaries, which are their big visions? We looked repeatedly at blockchain technology and big data, artificial intelligence, data driven marketing, new forms of storytelling, revenue distribution, piracy data. We consider all these subjects as being essential for the future of the film industry.

CJ: Just recently you launched the physical space for the FilmTech Office near the old Tempelhof Airport in Berlin. In what way is it more than just a co-work space?

ES: In its core, the FilmTech Office is a co-working space, there is no need to reinvent this setup. What is special about our concept is the focus on film and technology in a broad sense. Our members appreciate the fact that everybody else in the community works more less in the same field, even though in different areas. The range of profiles includes screen writers, editors, producers, marketers, designers, developers, creative technologists, curators – we can all benefit from each other and the network effect is great.

CJ: So what type of companies could benefit from being part of the FTO?

ES: We think anyone interested in exploring the touchpoint between film and technology will find an inspiring environment here. And we have a fantastic Italian coffee machine.

CJ: The FilmTech Meetup is supported by and launched with the support of the Creative Europe Desk Berlin-Brandenburg. Can you explain a bit of what they are doing that aligns with your vision.

ES: As a community event, the Meetup is free of charge. The modest financial support we receive from the CE Desk BB allows us to cover the few costs we have. We made a deliberate choice not to look for more funding or sponsors, we want to avoid a bigger administrative overhead, we also want to keep a full editorial freedom when experimenting with the format or deciding on line-up of speakers. The CE Desk BB supports the Meetup also with marketing and outreach, they have a vast network of people we could not reach easily. But above all they share our interest in the topics explored in this event format.

CJ: What are your thoughts on where the film and cinema industry is headed and what are the critical issues that it faces right now?

ES: I think we are at the verge of a new wave of digitization. In a previous wave, production and physical distribution have been fully digitized, this new wave will see the digitization of distribution strategies and audience engagement. Data will play a major roll, not only the ownership of data, but the understanding of it. Once cinemas will understand, address and engage with their audience in a much more efficient way, the business model of traditional distribution will come under pressure.

A situation with a steadily growing number of films and an increasing polarization between tentpole productions and Arthouse / independent films on one side, and a stagnant or decreasing number of cinema visits per capita on the other side, will simply force exhibitors and distributors to adapt to a new market context. But despite all positive claims from officials, I see quite a reluctance to embrace change and innovation, especially in the independent sector. The conversation is very much driven by the instincts of preservation of the status quo.

The opportunities for more R&D, more experimentation, testing, learning, failing, iterating is now better than ever and there is so much to learn from the way start-ups operate.

I am an optimist, I am sure cinema will prevail – the question is simply, whether we will still have the diversity both in terms of content and venues, if the consolidation of the market continues and mainly the bigger players apply new technologies and strategies. And there is a whole range of technologies in very early stages, and it’s hard to imagine what effect artificial intelligence will have on film making once it’s further developed. If we want to shape the way technology will impact film we should embrace all these opportunities.

CJ: What events are next on the horizon for you?

ES: Gian-Piero and I are exploring how the blockchain technology can be used to finance films, we are very interested in the idea of tokenizing financing and revenue distribution. We have such a project in the pipeline and are currently evaluating its feasibility, especially the legal context of such an endeavor is very complex. In terms of events on June 26 we have the “Networking Dinner: Film, Media & Blockchain” coming up, on July 5 we will co-host a FilmTech Meetup on music and film organized by the Berlin Music Commission at The Venue Berlin and on September 9 we have a FilmTech Meetup in collaboration with the Mallen Filmed Entertainment Economics Conference at MindSpace Krausenstr. looking at The New Normal – Filmed Entertainment in the Digital Era.