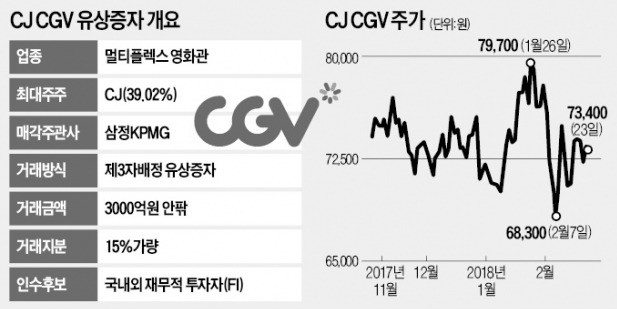 Korean and global exhibition major CJ CGV is looking to raise around USD $280 million through a private equity placement that would significantly reduce the stake of parent company CJ. The announcement comes as CJ CGV’s share price recovers from step drop and as the cinema operator tries to shift focus from flatlining domestic market to international growth.

According to investment banking industry on February 25, CJ CGV has selected Samjong KPMG as an adviser and is working to attract 300 billion won. Considering that CJ’s stake as a major shareholder in CJ CGV is under 39.02%, it is expected that the company is more likely to engage in a rights offering (issuance of new shares) for a third party without selling the existing shares.

The KRW 300 billion new shares will be the equivalent of a 15% stake in the company, while CJ’s stake would shrink to 30%.   Although Korea saw 200 million cinema admissions in 2017, the market is expected to plateau or stagnate, even as the three majors (CGV, Lotte and Megabox) continue to dominate. In its native market, CGV has been remodelling existing multiplexes and introduced concepts such as in-cinema book stores and cinema dating.

CGV’s main focus has instead been on overseas expansion, with presence across Asia in China (where it recently crossed 100 sites), Vietnam, Indonesia, Myanmar, as well as in Turkey, USA and a joint venture in Russia. The article also confirms that CGV has been looking at a potential acquisition of British/European operator Vue International. The KRW 300 billion is expected to be used on internal investments, rather than M&As, including repaying all or part of the KRW 100 billion (USD $93 million) investment by IMM PE and KRW 300 billion (USD $280 million) in total return swap (TRS) of Meritz Securities when CJ CGV acquired Turkish Mars Entertainment.