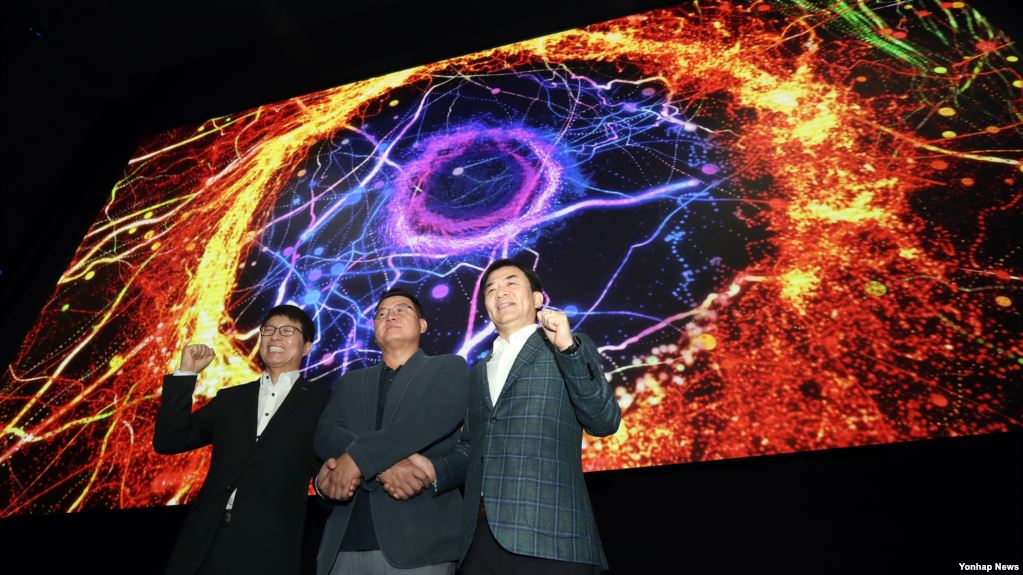 Samsung Electronics unveiled the first installation of its Cinema LED technology on 13 July in Seoul’s Lotte Cinemas World Tower 13 multiplex auditorium dubbed ‘Super S’. Samsung first demonstrated the technology at the CinemaCon convention in Las Vegas in March this year and achieved DCI compliance in May. Samsung also announced its ambition to capture 10% of the global cinema market by 2020, which it predicts will have grown from the present 160,000 screens to 200,000 in total. It would mean that 30% of its video display sales, which is mostly consumer television sets, would be B-2-B by then.

The opening of the projector-less cinema was proclaimed as a historic event in the 120+ years of motion pictures. “Since the invention of the projector by Thomas Edison in 1894, the history of the film has been with the development of the projector,” News Works observed on the opening day, pointing to developments stretching from the Lumière brothers to digitisation and most recently laser-illuminated projection.

“Today is the day when new innovations in the film industry will begin,” Kim Hyun-suk, head of Samsung Electronics’ video display business, said. “Cinema LED will vividly reproduce the picture quality and sound that movie screens have not shown in the past.” The occasion is a source of major pride in Korea, which has recently grappled with both political and corporate scandals. “It is encouraging that the technological innovation of the movie industry is starting in Korea amid the promotion of Korean movie contents,” an editorial in Hankyung proclaims, before going on to prescribe that “In order for the Korean economy to rise back to ‘innovation-led growth,’ there must be disruptive innovations such as Cinema LEDs everywhere.”

Samsung’s LED Cinema is said to be able to sustain its light output for over 100,000, thus claiming to be more economical than digital/laser projectors over a five year time span. The 96 LED panels that make up the installation produce a 4K (4,096 x 2,160) image on the screen that is 10.3meters (33.8ft) wide in size. “True-to-life audio” is delivered through a collaboration between Samsung Audio Lab and Harman Professional Solutions, which was acquired by Samsung last year.

At the unveiling ceremony clips from Paramount’s “Transformers: the Last Knight” and 20th Century Fox’s “Miss Peregrin’s Home for Peculiar Children” were shown on both conventional and Cinema LED screens. A reporter from dongA records the first impression:

The difference between sharpness and brightness was felt at once. In ‘Miss Peregrin’ I felt the texture was so vivid that I could see the black wrinkle of the black leather coat of the protagonist Eva Green. Under the bright sunlight, the leaves and grass in the shaded areas were clearly visible, and the hair on the main character ‘s face could be distinguished one by one.

Kim Seok-ki, vice president of the Video Display division at Samsung Electronics, stated at the opening that Samsung is “currently working with many overseas movie theatres [but for] the domestic market will focus on Lotte Cinema for the time being.” Responding to the criticism that the screen was small, the point was made that half of the world’s screen are this size or smaller, but that the Cinema LED cinema can be scaled to be larger.

“The Super S auditorium is a new paradigm for movie screening,” Lotte Cinema representative Chun was quoted as saying at the opening. He went on to confirm that Lotte “plan to introduce additional LED screens,” though no specific time-line or number was offered. Korean director Yoo Woo-suk, who directed the film “Lawyer,” was also on hand to proclaim that “July 13, 2017 will be clearly recorded in the history of movies.”

The Cinema LED has not only passed the DCI compliance testing, but also seems assured of a steady stream of content, both from Korean film makers and Hollywood studios. “We have been collaborating with Hollywood major filmmakers such as Fox and Universal Studios to build the best movie viewing environment, and we are strengthening the collaboration to expand HDR content,” a Samsung official was quoted as saying.

Lotte plans to take advantage of the 10x brightness that the Cinema LED screen offers.  “We will introduce special features such as’ Kids’ Auditoriums’ and ‘Dining Auditoriums’ by utilizing the advantage of being able to see in bright surroundings,” Lotte Cinema, CEO Chun confirmed to Yonhap News. There also plans to show sporting matches, live broadcasts and music concerts.

EToday became the first publication to dispatch a reporter to buy a ticket and experience the Super S Cinema LED as a regular patron. Jung Yoo Hyun writes that he had already seen “Spider-Man: homecoming” once in regularly projected digital 3D but was glad that he could see it again on the Cinema LED screen. The 20% ticket price increase will not come into effect until the end of August, yet despite this there were plenty of free seats in for the late screening.

As the film started, the sound from Harman’s JBL speakers is described as “quite vivid” and that the sound is well tuned enough so that it can be enjoyed regardless of which seat in the cinema one sits in. Yet compared to “La La Land”, which the reporter saw in the same cinema, the sound was described as “satisfactory”, though with the caveat that “Spider-Man” is not a musical.

When the movie ended, the blue house lights came on. For regular screening this means that the credits get washed out, but in this case the text on the screen still looked ‘vivid’. “With the software that automatically adjusts the calibration, it is the biggest advantage of the Cinema LED that the screen is clearly visible even in the lit environment,” Jung notes. He then asked other audience members what they thought. “I can feel the difference in image quality with the existing screen, but my eyes are quite tired,” Mr A. is quoted as saying, while ‘Mr B’s opinion was that “the picture quality is good and the sound is good, but the screen is small.”

There are rumours that Samsung will next open its second Cinema LED screen at an un-specified location in Los Angeles before the end of the summer. No doubt many more will follow if Samsung is to achieve its target of having deployed some 20,000 installations within the next three years.