The battle between three rival cinema surround-screen operators is heating up, with different films used to promote the various immersive premium large format (PLF) propositions. CJ 4DPlex has secured two major Hollywood titles for ScreenX, while Barco’s Escape will next focus on films shot specifically for its format and Philips LightVibes will debut this summer with the most expensive European film of all time.

It was widely reported that Disney and Jerry Bruckheimer’s “Pirates of the Caribbean: Dead Men Tell No Tales” would be the first Hollywood title released in the ScreenX format in the US, as well as in Korea,  China, Indonesia, Vietnam, Turkey and Japan. There are three ScreenX cinemas in the US: CGV’s own Buena Park and Los Angeles (Korea Town) cinemas, as well as the Las Vegas AMC where it was first demonstrated in US during CinemaCon. Only the two CGV sites will show the film in ScreenX, while a further 81 sites across the other territories will also screen the film in the 270-degree format.

But significantly “Pirates 5” was not the first major Hollywood title released anywhere in ScreenX, as Warner Bros’ “King Arthur: Legend of of the Sword” was released on ScreenX in South Korea (49 theatres), Thailand (one) and China (ten – all Wanda) on 18 May, with 28 minutes of the film in the three-screen format. The reason it was not also shown in US-based ScreenX cinemas was said to be a studio choice. 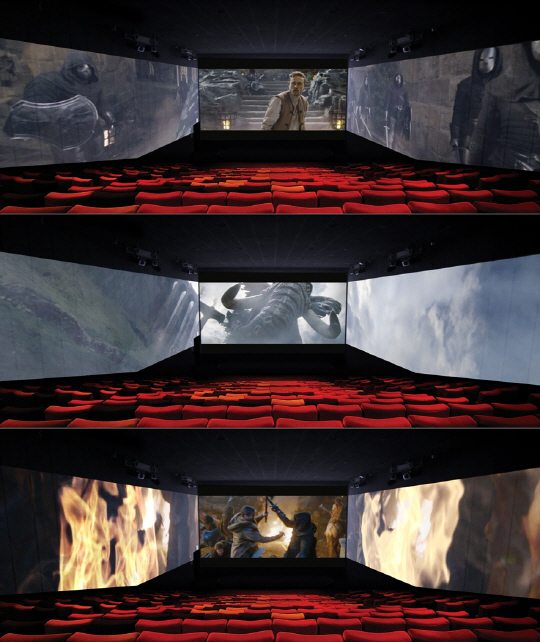 What was key in enabling a ScreenX’s release of “King Arthur” was that visual effects computer graphics (CG) companies worked on creating the additional side images for the film. More specifically Korean firms were employed (and presumably paid by CJ 4DPlex) to create the side footage, focusing on the film’s action scenes. Details of this was revealed in an article in ZDNet Korea.

The next film after “Pirates 5” to be released in ScreenX will be live stunts film “We Kill Death”, which is being created specifically for the ScreenX format. Last year only eight films were shown in the ScreenX format, primarily Korean films such as “Train to Busan” and “Everest”. But the aim is to have 40 films released in ScreenX by 2020, by which time the aim is to have 1,000 installations in place. CJ 4DPlex has partnered Wanda to both deploy the format and create content for it.

ScreenX is thus following the path set out by Barco’s Escape, which initially also released Hollywood films which had sections converted into the triptych screen format exclusively, before focusing on smaller-budget films specifically created for the format. “Maze Runner” (2014) had around 10 minutes of Escape footage, while “Maze Runner: Scorch Trials” (2015) had around 20 minutes and “Star Trek: Into Darkness” (2016) had just over 20 minutes.

There are no further Hollywood studio blockbusters currently announced for Escape. Instead Barco will next release the Wesley Snipes thriller “The Recall,” which was shot natively for Barco Escape, in select Escape theaters on 2 June. The film is produced by Canada’s Minds Eye Entertainment, which has green-lit a 6 picture slate of movies for Escape, including the just announced feature “Distorted” with John Cusack and Christina Ricci. After that director Scott Waugh’s feature “6 Below” will be out this autumn, with Fundamental Films’ “24 Hours to Live” starring Ethan Hawke targeting late 2017. There is no word on when the long-gestating Lady Gaga – Tony Bennett concert film will be shown in Escape cinemas.

What is interesting, though, is that two years ago Barco announced a partnership with producer Jerry Bruckheimer to collaborate on projects for the Escape format and for him also to join the board of Barco Escape. This is the same Jerry Bruckheimer whose latest “Pirates” film is being released in the rival ScreenX format. Asked about this, a representative from Barco commented that “We’re still actively reviewing titles with Jerry for Escape.” Technically it should not be a major challenge to convert a ScreenX film to Escape or vice-versa, but with CJ 4DPlex having paid for the special CG footage of “Pirates” it is commercially unlikely. 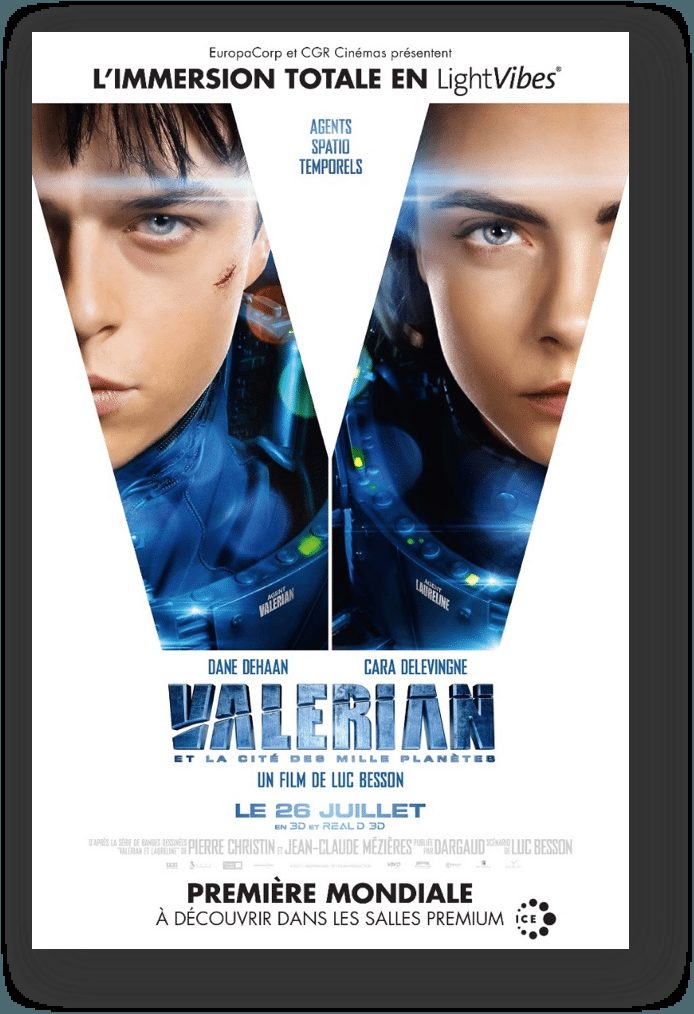 The third contender in the 270-degree immersive cinema race is Philips whose LightVibes panels do not have images projected on them, but instead create ambient lighting that matches or complements the on-screen images shown on Luminous Textiles LED panels on the side walls. The first full feature film to be shown in this system will be “Valerian: City of a Thousand Planets” when it opens on 26 July in 20 CGR cinemas in France. The screens are branded ICE (Immersive Cinema Experience) and feature 4K laser projection, Dolby Atmos audio and comfortable recliners. The film from director Luc Besson’s EuropaCorp is reported to be the most expensive European film ever produced.

Creating special side-screen content for regular Hollywood blockbusters is both costly and time consuming, much more so than converting it for other premium large format (PLF) formats such as Imax, Dolby Cinema or EclairColor. It also involves creative choices that require QC (quality control) and sign-off from the studios and most likely also the creatives – much like motion seating or immersive audio. It also requires tapping into the CG pipe-line of various external VFX companies that are under financial pressure to deliver shots and sequences on time. There is furthermore no ancillary market to re-monatise three-screen content; which is also the original selling point of making ScreenX/Escape/LightVibe a uniquely cinema-only experience.

The closest analogy is the 3D stereo conversion of 2D content in terms of time, cost and effort required. Yet as long as the universe of immersive installations is only around 100 screens in total and with ScreenX and Escape not sharing content, Hollywood studios themselves will not be delivering their top blockbusters in yet more proprietary formats. Hence why Barco, CJ 4DPlex and Philips are paying for the conversion themselves and/or turning to independent producers to create content. This will not change until installations start to approach 1,000 sites, no matter how much more these screens earn compared to regular screens, or even IMAX and LF screens.