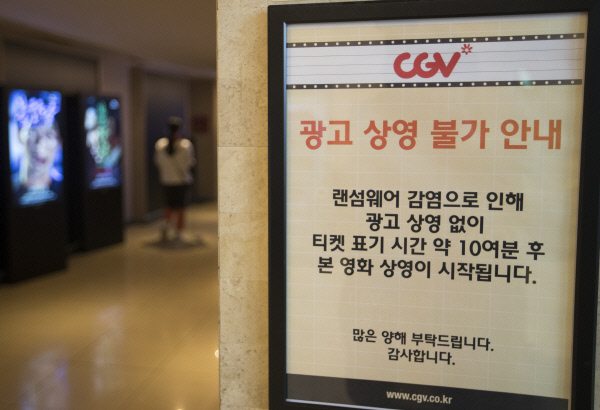 Korea (Republic of, South) – The WeCry ransomware attack affected several CJ CGV cinemas, which posted signs (above) notifying customers: “Today, some commercials and lobby multi-cube servers of some auditoriums are infected with Ransomware, so some of the commercials and lobby videos screened before the start of the movie are not being shown.” Digital cinema servers are not believed to be affected, but separate lobby and advertising servers appear not to have been updated to protect against infections. Kyunghyang Newspaper (KR) – 15 May 2017

India – The Karnataka High Court has ruled that the state government’s cinema ticket price cap of INR 200 (USD $3.12, but INR 260 or USD $4.05 including tax) should not apply on weekends and public holidays. Significant victory for multiplex operators. Star of Mysore – 12 May 2017

New Zealand – Reading International has received an insurance payout of NZ $36.6 million (USD $25 million) for the eartqake damage and lost business from its Courtenay Central multiplex in Wellington. Reading’s New Zealand revenue for Q1 was down USD $1.3 million to USD $5.4 million, but up 6% for USA and Australia to USD $10.3 million. Reading will open its 10th cinema in New Zealand in 2019 or 2020, though location is not confirmed. Press Reader – 13 May 2017

Belgium – Cannes is around the corner, which means it is time for final cinema statistics for last year. First out is the European Audiovisual Observatory (EAO), which found 991 million tickets sold last year (up 13.3 million on 2015) but box office down 2.3% to €7.04 billion across the 28 EU member states. “The drop in GBO reflects a decline in average ticket prices in selected markets including Italy, Spain and Belgium, as well as declining box office results in Germany,” and the fall in the pound following the Brexit vote. The Irish and French were the EU’s top cinema goers and digital conversion hit 93%. Press Release – 11 May 2017

Spain – The number of Spanish cinemas keeps falling, with only eight villages with fewer than 1,000 inhabitants still having an active cinema. The cost of going digital is the main reason for many of them closing.  The Yearbook of Spanish Cinema shows that as well as the second annual decline in box office for Spanish films (to 98 million euros)  the sumber of cinema screens declined from 3,588 in 2015 to 3,492 in 2016, and a corresponding decrease in the number of seats from 800,550 to 782,208 last year. Ramon Colom, President of audio visual body FAPAE, has warned that “by 2020 there will be almost no cinemas in the city centres.”  El Confidencial (ES) – 10 May 2017

India – In an interview with Siddharth Jain the director of Inox says that India’s No. 2 chain is not for sale and has a pipeline of 500 sites, with around 50 new openings per year. Jain is firm on the 90-day window for home release of film but interestingly the cost of electricity is bigger issue for multiplex operators, coming second after rental i terms of overall cost. Well worth reading for level-headed analysis of the Indian cinema sector. Economic Times – 15 May 2017

Malaysia – Golden Screen Cinemas (GSC) is officially no longer for sale. It was reported last year that parent company PPB was in discussions with Koreans and others to sell GSC for as much as USD $500 million, but it seems to price may have been too high. GSC will instead now focus on expanding in Malaysia, as well as Vietnam and Cambodia. The Star – 10 May 2017

Myanmar – Paradiso Cinema has announced plans to open 45 cinemas across Myanmar this year. Actor Lwin Moe is quoted as saying “Mainly, we build cinemas in towns that currently don’t have one. The aim is for every part of our country to have a cinema so that local viewers can enjoy cinemas for relaxation.” Eleven Myanmar – 16 May 2017

Germany – Disney is the latest studio to have partnered German ticketing platform DeinKinoTicket.de with Fox, WB and Universal already partners, as well as local distributors such as Constantin Film and Universum Film. The platform is owned and operated jointly by the largest German cinema chains and has been a succes, though there is still major gaps in terms of its coverage when it comes to smaller cinemas. Blickpunkt: Film (DE) – 9 May 2017

UK – ‘How important is international box office to Hollywood?’, asks Stephen Follows. A lot, is the short reply, but follows has tons of great statistics, charts and insights as always to give many more layers to the answer. This includes breakdown by genre and which comedy actor’s overseas earnings are the smallest (Tyler Perry) and the biggest (Robert De Niro!). Stephen Follows – 15 May 2017

USA (NY) – Screenvision has launched the ability for advertising buyers to only have their ads shown in front of the biggest blockbusters. The “10 Pack” deal will put adverts in front of the ten films that Screenvision believes will be the year’s biggest hits. It is also launching  Cintel, “which promises to blend behavioral, psychographic and demographic audience data to help buyers determine the movies or genres that appeal to the people who are most likely to buy their products.” Deadline – 11 May 2017

Korea (Republic of, South) – Just how noisy are Korean cinema concessions? This hard hitting question was put to a test by a Chosun reporter armed with a decibel meter and lots of cinema snacks. Opening a chips bag was 97.1 dB, 79.5dB for a sweets bag, while eating nachos had a maxim noise of 85.5 dB but with sauce it fell to 62.6dB. The noise of a subway or vacuum is around 80 DB while a car is around 90 DB. Popcorn was 69.1 dB. No word on how loud Coke slurping is. Chosun (KR) – 12 May 2017

USA (CA) – Brian Claypool is back at Christie as VP Product Management Global Cinema. He was previously Senior Director Strategic Business Development at Barco, which he joined in 2011 having previously been Senior Product Manager at Christie. We didn’t see much of him at CinemaCon and this is probably why. Press Release – 11 May 2017

France – The Pathé Liberté cinema in Toulon was the site of a robbery last Wednesday. An armed masked man threatend staff and got away with a few hundred euro. Var-matin (FR) – 11 May 2017

UK – A man caused GBP £1,500 worth of damage to a ticketing machine at the Odeon cinema in Brighton. The police has asked for help in identifying the man, who also did damage to a fire exit door. Sussex Police – 11 May 2017

UK (N. Ireland) – The Eclipse Cinema in Downpatrick had its bathroom mirror stolen. This is the sign they put up in its place. Priceless. BelfastLive – 15 May 2017

UK – Stratford’s Picturehouse had to be evacuated after a fire broke out on Thursday night (11 May). 50 people escaped unharmed and fire services were quickly summoned. The cause is not known. East London & West Essex Guardian – 15 May 2017

UK – A useful primer on cinema etiquette. Because it is needed more than ever.

Not sure how cinemas could be clearer about this one. Of course, so many people now show up late to a film (if one arrives once the film has started, go home or wait for the next screening; another invaluable lesson from Allen) they might miss the announcements. But this should still be obvious. Nowadays everyone seems so addicted to technology that the thought of only looking at one screen at a time is incomprehensible.

Alamo Drafthouse, with its Zero Tollerance of smartphone use, can’t expand fast enough for my liking.  Varsity – 9 May 2017