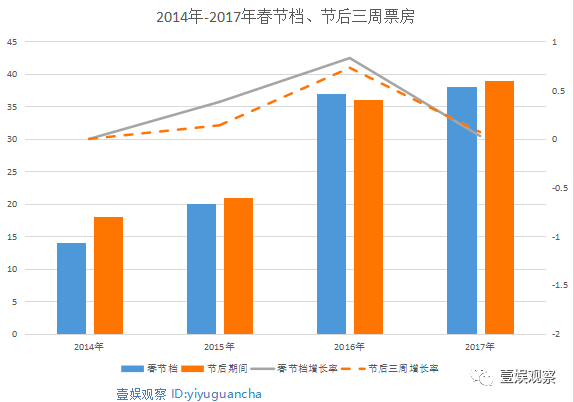 The first two months of the year were essentially flat when it came to China’s box office growth. Takings were CNY ¥10.9 billion (USD $1.57 billion), which was a growth of just 1%. However, it is worth remembering that the numbers of screens has grown significantly in the last 12 months, meaning the per-screen average is falling and that BO now also includes ticketing fees. January and February are best considered to gather as Spring Festival (Chinese/Luna New Year) dates move from year to year. Variety – 1 March 2017

Want to watch “Logan” in China? In Taiwan and Hong Kong SAR it is 140 minutes long, while the mainland is a trimmer version of just 123 minutes. The later is 18-only, while any child is permitted to see the Mainland Logan-with-severe-cuts. SCMP reflects on the paradox of China’s film censorship that restricts content but not access in cinemas, particularly as it relates to a film that even its director said is “not for kids, it’s just that simple”. Meanwhile the no less bloody “Hacksaw Ridge” was shown with only minor cuts. SCMP – 8 March 2017

How exactly does cinema censorship work in China? CFI’s Fergus Rya lifts the veil on the opaque process and organisation that decides just how much of “Logan” has to be sliced off to make it admissible for even the youngest Chinese tots. “As Zhang puts it, the offices represent “the final door that every Chinese and imported foreign movie has to pass through before they’re able to reach Chinese audiences and the Chinese market.”” No wonder that everyone form Michael Bay to Nikita Mikhalkov have been there to pay their respects. China Film Insider – 14 March 2017 Slowdown – Imax’s CEO Richard Gelfond is blaming the Chinese box office “chill” on more discerning movie goers becoming more sensitive to content,” and quality. China has “become a much more mature market, like the rest of the world.” This is the same Gelfond who less than a year ago predicted that China BO would overtake the US in 2018. How quickly things change. The outlook is not optimistic in terms of the rest of the year according to domestic analysts. WeiXin – 10 March 2017

A year on from the “Ip Man 3” scandal of ‘ghost screenings’, what lessons have been learned? It was not the first case of such fraud and very likely the tip of the iceberg. It seems that things have improved but not fixed things. There are still ‘sold out’ post-midnight screenings for films and too many films are still losing money. WeiXin – 13 March 2017

What are the key factors in Chinese audiences picking a film and a cinema? Ent Group has been doing some poling and food that word-of mouth for the former and parking space for the latter are key. WeChat continues to be the dominant platform – for everything. 10 minutes is the maximum of what audiences will endure in terms of pre-show adverts. Ent Group – 11 March 2017

The concentration amongst the top eight cinema chains in China barely moved 1% in the past year, despite the many M&As. That is because a lot of the mergers fell outside the top eight and the rate at which new cinemas were built and opened cancelled out the effects of the M&A. Wanda continues to dominate, much to nobody’s surprise. Yet the slowdown in BO is only likely to accelerate the pace of Cinema M&A in China (for an even deeper analysis read this), with an average of 26 new screens still opening daily. WeiXin – 11 March 2017

There is a good reason why only Hoyts was acquired by Wanda, while AMC did the buying of Carmike, Odeon & UCI and Nordic Cinema Group. Wanda’s Wang is a smart man who know which way the wind blows in Beijing and most likely anticipated the China’s tightening capital controls that anyway sunk the Dick Clark Productions USD $1 billion deal. PRC’s Commerce Minister Zhong Shan recently spoke out against “blind and irrational investment” abroad, some of which “even have had a negative impact on our national image.” China’s top central banker Zhou Xiaochuan went even further, “Some are not in line with our requirements and policies for overseas investment, such as in sports, entertainment and clubs. This didn’t bring much benefit to China and caused some complaints overseas.” Echoes of India five years ago. New York Times – 12 March 2017

The effort to promote quality 3D presentation in China has reached an importan milestone with 100 certified RealD6FL auditoriums in Wanda’s circuit in China. Launched in 2014 the scheme has certified 258 screens in total, with Wanda by far the largest. CN Beta – 8 March 2017

In the battle for supremacy amongst the cinema ticket booking platforms, Alibaba’s TaoPiaoPiao overtook Cat’s Eye for the first time in terms of app use. Alibaba has been throwing a lot of resources (primarily money) to make TaoPiaoPiao a success, particularly during the recent Spring Festival/Chinese New Year. CCStock – 8 March 2017

International Women’s Day is a semi-holiday (half-day for women) in China, when cinema try to entice females to the cinemas with special deals and promotions. It seems that a member of the less-fair sex was a little bit too keen to take advantage of this. A man dressed up as a woman refused to hand over ID when challenged by cinema staff. Ultimately after papers confirmed the gender of the patron as ‘male’ the staff must nevertheless have been impressed by his effort (or had high LQBT sensitivity training) because they allowed the patron to get the half price ticket in the end. Mirror – 10 March 2017

A man whose dog is gradually going blind got special permission to take him to the cinema to watch a film together. The Alaskan Malamute apparently enjoys watching television on a big screen with his owner. The film they went to see? It was “A Dog’s Purpose”. Of course. The trend of dog cinema in Chia seems to be catching on (see image below). Munhwanews (KR) – 9 March 2017