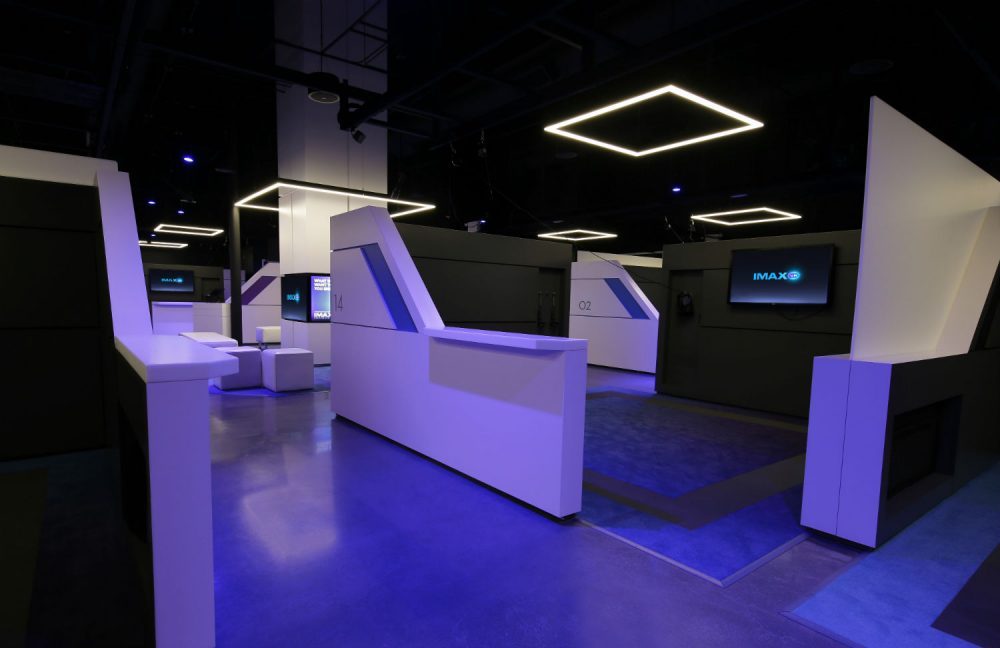 Is virtual reality (VR) the saviour or a nail in the coffin for traditional cinema going? That depends on who you talk to or what you read recently. Efforts to launch VR as a symbiotic companion to the cinema experience are gathering force, just as questions are being raised about the viability and public interest in VR (or lack thereof).

The past few weeks have seen a flurry of VR-related announcements that relate to cinema in one way or another. In many ways it is reminiscent of the media excitement a year ago of Sean Parker’s Screening Room and day-and-date releases of Hollywood blockbusters in the home. The key difference is that some of these VR/cinema ventures have actually launched. These announcements have mainly centred on new company Dreamscape Immersive and Imax’s new moves in the VR space.

The ‘game changing’ location based VR company Dreamscape Immersive caught the attention because of the Hollywood connections it touted when it announced itself. Led by former Dreamworks SKG studio head Walter Parks it had attracted investment by  Warner Bros. (Time Warner also recently invested in VR and AR company 8i), 21st Century Fox, Metro-Goldwyn-Mayer (MGM), IMAX Corporation, Westfield Corporation, and Steven Spielberg and has an advisory board that even included Oscar winning composer Hans Zimmer. Dreamscape’s technology is based on Swiss Research Foundation ARTANIM (see demo above) and it plans to open a flagship VR Multiplex in the second half of 2017 in the Westfield’s Century City Mall, next door to the 20th Century Fox lot in Los Angeles.

Meanwhile the first Imax VR Experience Centre was opened near The Grove in Los Angeles earlier this year (see video below) and Imax announced new installations planned with Regal, AMC and JinYi Media for US and China. Imax also announced a content partnership with Ubisoft and Skydance, whose VR projects “Archangel” (a plot-driven shoot-em-up game) and “Life VR” (a VR tie-in with eponymous film produced by Skydance) are the first ones being demonstrated by Imax. The company has already launched in the UK and China.

Some of these pushes into VR seem fuelled by a fear that it could be the technology that finally kills of the theatrical experience, thus succeeding where television, VHS, piracy, DVDs, flat-screen TVs and Netflix have conspicuously failed to do so. This fear was stoked by the recent Vanity Fair article “Why Hollywood as We Know It Is Already Over” that charts the decline in cinema audiences (though that’s only true for North America) and predicts that streaming films to your VR headset is the bright future that will put cinemas out to pasture:

This might begin with Facebook’s V.R. experience. You slip on a pair of Oculus Rift glasses and sit in a virtual movie theater with your friends, who are gathered from all around the world. Facebook could even plop an advertisement next to the film, rather than make users pay for it. When I asked an executive at the company why it has not happened yet, I was told, “Eventually it will.”

The article then moves on to dead actors being resurrected, like Peter Cushings for “Rogue One” and that artificial intelligence might write scripts like Aaron Sorkin or create the optimal edit of any film. Sadly the author fails to mention that AI scripted films already exists (the unintentionally hilarious science fiction short “Sunspring”) and that IBM Watson’s AI edit of  the movie trailer for 20th Century Fox’s “Morgan” didn’t save the film form having  one of the bottom 10 all time worst openings for a wide release. This is not to say that AI won’t improve, but failing to acknowledge these initial problems undermines the wider point being made.

Moreover, there seems to be a growing backlash against VR, fueled by what’s seen as widespread consumer apathy to the VR proposition. Significantly Best Buy is closing nearly half of the pop-up stores demonstrating and selling Facebook’s Oculus Rift technology in the US. It was recently announced that 200 of the 500 stores-within-stores would close after could go a whole day without a single demonstration. “Multiple “Oculus Ambassador” workers BI spoke with said that, at most, they would sell a few Oculus headsets per week during the holiday season, and that foot traffic to their pop-ups decreased drastically after Christmas,” Business Insider reported in the first week of February. Stores will continue to sell Rift headset and controllers (at USD $600 and $200 each), though it is hard to see these selling in significant numbers.

Yes a better indicator of the viability of VR is its popularity in China, one of the three initial markets for Imax VR, and a country where VR arcades (so-called ‘experience rooms’) have mushroomed in the past year. Companies such as Shenzen-based EMAX both design the headsets, create the software and content and operate the ‘experience rooms’ of which it has 179 across Mainland China, Taiwan and South Korea. People often come in groups and either use the headsets together, or watch on a screen as their friend tries it. “The person who is experiencing VR is having fun, but for the people observing it is even more entertaining,” Lan Chunru, the founder of Chuyu VR Cafe told TechNode. Even more established companies like HTC have opened Vive VR cafes in Shenzen to tap into the public interest.

Yet this initial surge in interest has also lead the China market to rapidly become saturated. Research based on surveys and discussions with around 3,000 VR arcades across China by Hubei Century Network Technology found that only 26% were making a profit. In its article “Reality Bites for China’s VR Industry” by Nikkei Asia Review went on to outline:

VR-value, an information provider to the industry, unveiled similar findings on China’s microblogging site Weibo. Of 35,000 VR arcade shops which opened last year across China, only 20% are making profits, according to VR-value. Government-owned media outlet China.org also recently reported that 90% of VR startups have declared bankruptcy.

It seems that the air might have gone out of the world’s most sophisticated VR market even before Imax has opened its first VR cinema space. Most customers were not prepared to pay the equivalent of USD $5 for a VR session and at the more acceptable price point of USD $1.50 VR arcades struggled to make a profit.

This would seem to indicate that VR still has a long way to go and could be a more natural fit for traditional gaming arcades than for cinemas. Ultimately the success of VR tie-ins for cinemas will come down to a simple formula:

In plain English, the real estate in the cinema has to earn more from one player at a time using each pod than the whole of the same space could earn from being a traditional cinema, given the cost of operation and rental for that space. And nobody will buy or consume popcorn or Coke while they are playing, so unless they have (non-paying) spectator friends visiting the concessions counter, that is a major lost earning for cinemas.

This is not to say that VR in cinemas will be a failure, or that exhibitors should not be trying it out. In many older cinemas there are vast largely unused spaces that could relatively easily be re-purposed for VR use – the old projection rooms. You could even stick a virtual 35mm projector in there without much cost.