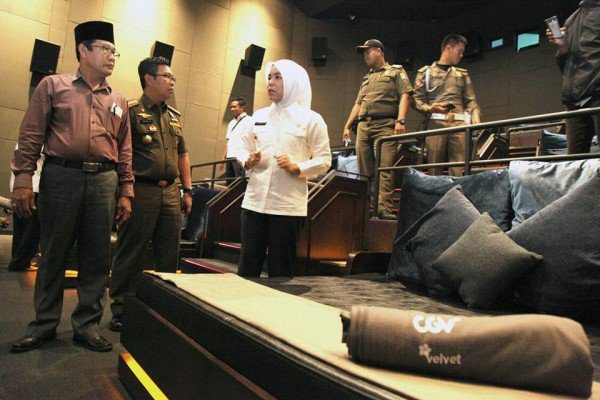 Indonesia – CGV’s luxury bed cinema in Palembang has been closed by the South Sumatran capital’s Deputy Mayor. The Velvet Class venue was visited by Fitrianti Agustinda after receiving complaints from ‘concerned citizens’ and “was apparently scandalized upon seeing the beds, arguing that they could promote adultery and sexual misconduct.” CGV explained that the cinema beds were meant for (married) couples and for families with children, with video surveilance ensuring no hanky-panky took place. Yet the conservative mayor would not budge and ordered the cinema to shut until regular seats were installed. Oddity Central – 6 February 2017

Malaysia – Meanwhile in neighbouring Malaysia the Lotus Five Star cinema has been granted a licence to open cinemas in the state of Kuala Terengganu, where no cinema has operated for 22 years after a conservative Islamist party came to power. There will be strict conditions, such as films having to end screenings before midnight and no films shown during major Muslim festivals, though men and women will be allowed to watch films together.  New Straits Times – 17 February 2017

Korea (Republic of, South) – CJ CGV and Lotte have won an appeal against the Fair Trade Commission, which had found them guilty of blocking the films of other distributors in favour of their own. The two cinema chains had been ordered to pay KRW 5.5 billion (USD $4.8 million). The ruling could still go to the Supreme Court. KBS News – 15 February 2017

USA (CA) – In cases it needed telling, Netflix is most definitely not killing cinemas. That is the column and message from NATO President John Fithian in the Hollywood Reporter. He goes on to make the point that while, yes, ticket prices have been going up, this has also meant that there has been money to improve the cinema experience with more comfortable seats and new technologies like Dolby Atmos that are not paid for by the VPF. THR – 16 February 2017

France – Earlier this week Ymagis presented the EclairColor at the Berlin Film Festival in the hip Eiszeit Cinema (yours truly attended) and gave a very open and candid talk about what the company is trying to achieve with it, whilst shoing clips form “La La Land” and other films. Le Parisien profiles the Varennes-sur-Seine cinema that has been running Eclaircolor film projection for over two months and the results are impressive, say both the audience and the cinema owners.  “There is a Wow effect,” enthuses Cédric Aubry. Ymagis CEO Jean Mizrahi is also interviewed. Le Parisien – 16 February 2017

USA (KA) – AMC is getting creatives with its cocktail offerings. The cinema chain’s MacGuffin restaurant and bar is offering a Forbidden Fruits cocktail to tie in with the showing of “Fifty Shades Darker.” No doubt it will be a bigger hit than the Great Warrior drink that celebrates “The Great Wall” release. AMC website

UK – But Secret Cinema are not the only game in town. A Quentin Tarantino-themed pop-up cinema is coming to London. “From 22 March to 8 April, Backyard Cinema will turn Mercato Metrapolitano into the Last Chapel, inspired by the abandoned church in the Nevada desert where Mia was shot at the wedding massacre.” It will screen QT films and also have a food and drinks place called the From Dusk ‘Till Dawn bar. Metro – 16 February 2017

USA (CA) – Ever seen a vintage bottle of Coke or an old Coca-Cola poster in a movie set in the past? There is one man whose job it is to get period details right when it comes to the world’s oldest commercial brand to appear in films. Michael Nusinow scours old warehouses and bottling plants for original Coca-Cola bottles and artefacts that then end up in TV shows and movies. There is an entire warehouse in Los Angeles where this is stored, though these days it also includes Smartwater and Honestea as the Coke brands expand. Coca-Cola Journey – 9 February 2017