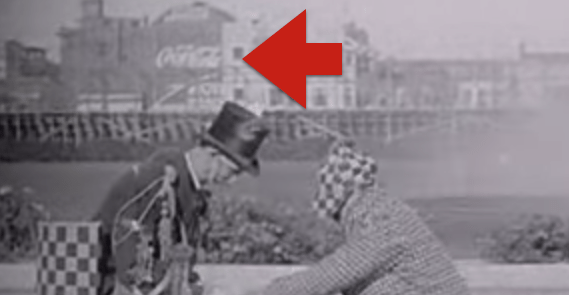 It is customary with retrospection at the end of the year. But rather than looking at the box office of the past 12 months, we wanted to take you back a whole century, to the start of the most important corporate partnership in the history of cinema exhibition. 1916 was the first year Coca-Cola ever appeared on the big screen. In the 100 years since the Coca-Cola Company has only grown in importance to the movie business – both on and off screen.

The Coca-Cola sign first popped up in a film in a blink-and-you-miss-it appearance that was most likely part of a gag, rather than a paid product placement – decades before the term became a norm in the movie business. The fact that it is a black and white film makes it harder to recognise the iconic red-and-white sign, but the timeless font (Spencerian script, which flourished from 1850 to 1925 in the US, in case you were wondering) gives it away.

The Coca-Cola sign can be in the background for all of 20 seconds of the short silent film “The Mystery of the Leaping Fish” from 1916 starring Douglas Fairbanks (the Ryan Gosling of his day). It is very likely that the Coca-Cola Company did not pay for the brand placement, even though (or perhaps because), Fairbanks’ character is called ‘Coke Ennyday’ – which is not an allusion to the soft drink, but to one of the many types of drugs that lead character consumes in the course of the film.

“The Mystery of the Leaping Fish” is something of a cult film that spoofs Sherlock Holmes in having a lead character that investigates mysterious incidents under the influence of dope. The clock on Coke Ennyday’s wall (above) has even spawned GIFs that pop up frequently on social media today, probably without most of the posters realising where it came from.

Written by Tod Browning, D. W. Griffith and Anita Loos the film’s detective is “given to injecting himself from a bandolier of syringes worn across his chest, and liberally helps himself to the contents of a hatbox-sized round container of white powder labeled “COCAINE” on his desk,” according to the film’s Wikipedia page. Think “Bad Lieutenant” meets “Keystone Cops”. 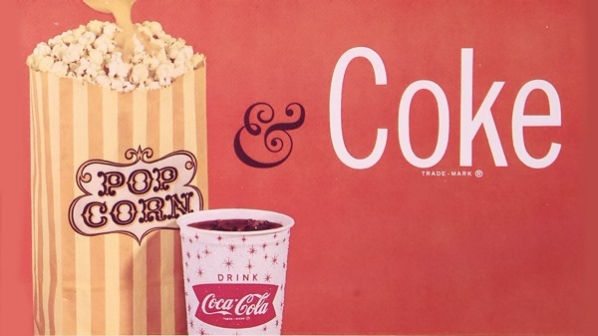 Since then Coke (the drink) has become as synonymous with cinema going as popcorn. This is not just because of the soda fountains that the Coca-Cola Company encouraged the installation of in cinema foyers, but also because of the number of films that it appears in. The Coca-Cola Company has a page on its website called ‘Coke Red on the Silver Screen: Exploring the Brand’s Role in Movies‘ that charts the many appearances of the brand.

“From being on the billboard in Times Square in King Kong, to Warren Beatty enjoying the refreshing beverage in Bonnie and Clyde, the influence cannot be denied,” director Ridley Scott is quoted on the site as having written in the forward to a photography book chronicling Coke’s mark on the movie world.

There are simply too many movies with Coke in them to list them all here and do them justice. But our personal favourite has to be the tense scene toward the end of Stanley Kubrick’s ” Dr. Strangelove Or: How I Learned To Stop Worrying And Love The Bomb.” To instead appreciate just how big Coke has been in cinema, take a look at the 2012 infographics form Mashable below that charts (no pun intended) the rise of the brand on the silver screen.

It is no secret that we here at Celluloid Junkie are big fans of Coke and are proud to have recently launched the CJ + Coke Retail Insights series. We look forward to bringing you much more in 2017 with cinema’s most important corporate partner, but first it is time to raise a glass of the bubbly stuff (brown, not Champagne!) and toast Coke for all that it has done for cinema. Happy New Year!