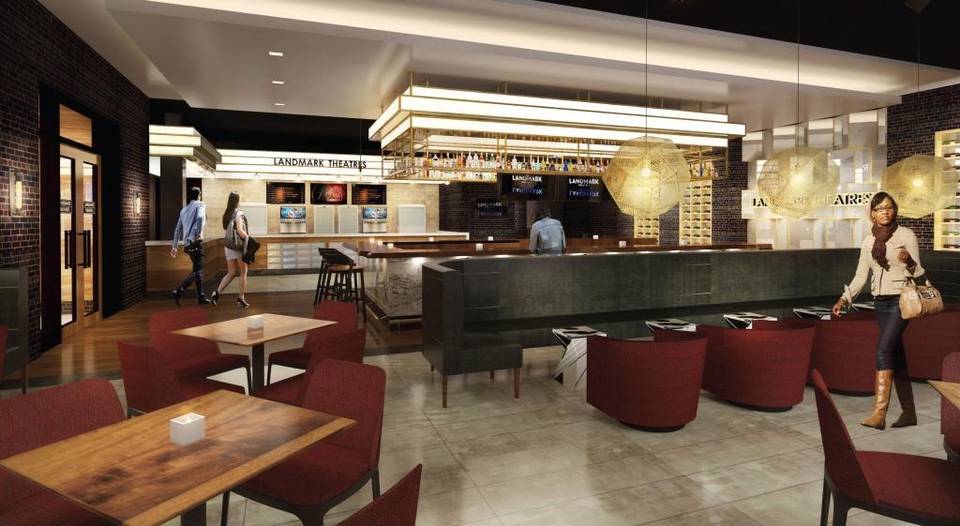 USA (FL) – Coral Gables is getting a new luxury multiplex with the opening of the new Landmark at The Shops at Merrick Park. The seven-screen cinema is the city’s first mainstream cine since the Riviera closed in 1999. Seating is just 47 to 100 seats (leather recliners), with laser projection and full bar menu and food offerings. It joins five existing stand-alone art-house cinemas in Miami Dade county. Because it is built on public land it has had to agree to non-exclusivity of titles. Miami Herald – 9 December 2016

USA (NY) – Downtown Flushing in NYC’s Queens is getting its first cinema since the RKO Keith theatre closed 30 years ago. The Tangram mixed-use project by F&T Group and SCG America will include a 34,000 multiplex space with room for six to eight screens seating 500 to 800 patrons. The plan is for it to be an “experiential” theatre that includes dining options. The cinema is not expected to open before the end of 2018. Queens Tribune – 8 December 2016

Canada – Landmark Cinema is set to build an eight-screen multiplex in East Regina with all auditoriums featuring leather recliners. The cinema will be built in a commercial space known as Aurora, a shopping centre under development in East Regina, where it will be an anchor tenant for smaller shops and restaurants. CBC.ca – 2 December 2016

Israel – Cinema City has opened its new multiplex in Netanya; an investment of NIS 45 million (USD $11.8 million). The multiplex has 14 screens, including two VIP halls with laser projection. The Jerusalem Post – 1 December 2016

France – A five to seven screen cinema is planned for Sable within two years. The multiplex along the lines of those by Pathé multiplexes or Mega CGR would open end of 2018 – early 2019,  located downtown near the cultural center Joël Le Theule. It is proposed by Gérard Thum , a Parisian businessman and former film producer, whose aim is to open small multiplexes in what he terms the “cultural desert” that is of medium size French cities far from major urban centers. One such city is Gien, near Orleans Loiret, where his cinema is about to arrive in early 2017 (see above). Around €5 million will be invested. France Blue (FR) – 7 December 2016

France – A new cinema has opened in Mont-de-Marsan. Le Grand Club multiplex will be accompanied by bars and fast food restaurants. It is the 25th cinema in the family-owned chain. Sud Ouest (FR) – 5 December 2016

Germany – The new Luxor-Filmpalast in Heidelberg will open in April 2017. The cinema will have 15 screens seating 1,800 people. There was a ceremony during which guest admitted the work-in-progress, including the nine meter high cylindrical aquarium with 1/2 million liter water and real sharks (!) behind 80 cm thick glass, the 44-seat pirate-themed VIP screen (below) and an open-air cinema on the roof seating 200 people. It sounds and looks like it will be an amazing cinema – and tickets will only be €9.50 for adults. Heidelberg 24 – 1 December 2016

Germany – Pocking near Passau is set to get a four-screen cinema next year, according to the town’s mayor. The planned 600-seat cinema does not have an operator yet, but will be part of a shopping centre and residential development. The planned opening is set for end of 2017. Passaeur Neue Press (DE) – 8 December 2016

Germany – €10 million will be invested in a new cinema complex in Aurich by operator Muckli. The aim is to have it in operation by December 2017. The city currently has a smaller cinema in Carolinenhof, which would be closed once the new one opens. Emder Zeitung (DE) – 10 December 2016

UK – Details have been revealed about the 10-screen Odeon in Bournemouth’s Westover Road. The multiplex at the Bh2 leisure complex will  be a ‘flagship’ installation with an iSense PLF screen, recliners in eight of the ten auditoriums, a special kid’s screen and a new selection of hot food offerings. When it opens in early 2017 it will mena the closure of the old Odeon and ABC screens nearby. Daily Echo – 10 December 2016

India – PVR has opened its fourth cinema in Vadodara in the state of Gujarat. It is the first ECX (Enhanced Cinema Experience) sub-brand of PVR in Gujarat, where it now has 12 cinemas with a total of 53 screens. Press Release – 10 December 2016

Romania – Cinema City has opened its third multiplex in Romania this year, located in Shopping City Piatra Neam and has six screens with 992 seats. Cinema City has invested a total of USD 21 million this year in cinemas in Romania, where it now has 24 multiplexes with 223 screens across 17 towns. Film News Europe – 9 December 2016

Germany – The Ufa-Film­palasts in Cologne is celebrating its imminent re-opening. Having closed in 2010 the cinema re-opens with eight instead of 13 screen and seating capacity reduced form 2,200 to 1,400. A soft launch is planned for 15 December for “Rogue One” but the official opening will be held in January. Stadtrevue (DE) – December 2016

UK – A major refurbishment is planned for Peterborough’s re-christened Showcase Cinema de Lux. Seven screens have already re-opened, with the rest due before Christmas, featuring leather recliner seats and 4K (laser?) projection. Judging from the comments section, prices have stayed at GBP £6.50, at least for now. Competition from nearby Light Cinema in Wisbech seems to have spurred the renovation. Peterborough Today – 11 December 2016

India – Mumbai art-deco cinema Liberty has re-opened after four years’ of closure. The cinema has featured live stage events in the meantime but shut in response to low attendance and high ‘entertainment tax’.

Now, armed with a state-of-art projector, sound system, a silver screen and a POS (Point Of Sale) setup for everything from tickets to popcorn (hail cashless economy), Liberty is ready to welcome back Hindi films with Dangal which will hit the marquee on December 23.

RG Studios together with Sohel Kazani’s Cineasia Film is responsible for the effort to boost the fortunes of single-screen cinemas. And apparently customers do NOT want the creaky wooden seats imposed from the USA in 1947 replaced. Mumbai Mirror – 9 December 2016

Germany – After 15 months and around half a million euro invested the Walsrod Capitol Theater has a fifth auditorium. The 65 seats face a 5×2.5m screen with 7.1 audio. Walsroder Zeitung (DE) – 11 December 2016

Poland – Prudnpisk has a cinema again with the opening of the renovated and expanded Cinema Diana. The auditorium is located in the former House of Culture, where PLZ 1.7 million (400,000 USD $) was spent to renovate and equip it with digital projection, with a grant form the Polish Film Institute. The town’s last cinema closed 14 years ago. Nto.pl (PL) – 14 December 2016

France – The public swimingpool in Longuenesse held its first cinema screening on Saturday 3 December. The event sold out within 24 hours and 250 people attended. No popcorn was sold or served as it tends not to agree with water. The movie “Asterix and Obelix: Mission Cleopatra” had a problem in that the DCP originally played in German, before the film was re-started with the French-language track. Four frogmen (!) took turns making sure everyone was safe above and below water. It is not the only swimming pool in France dubbing as a cinema. La Voix du Nord (FR) – 4 November 2016

Germany – A wintertime open air cinema has found few patrons willing to brave the weather in Schalksmuhle. The organisers admit to being disappointed but said it was worth a try. Despite a seven-by-four meter screen, heating lamps and concessions few people wanted to come and see “Polar Express” in an outdoor setting. Outdoor cinemas did poorly this summer in Germany due to bad weather, but the dry winter was not much better it seems. Come-on.de (DE) – 4 December 2016

UK – New plans to demolish Plymouth’s former Reel Cinema and replace it with student flats and hotels. It competed with a Vue complex at Coxside, as well as a coming construction of a GBP £40 million multiplex at Bretonside. Plymouth Herald – 7 December 2016

USA (MN) – The headlines says it all: TERRA INFIRMA The Last Days of the Historic Terrace Theatre. An art-deco gem reduced to rubble before a court could block the destruction.