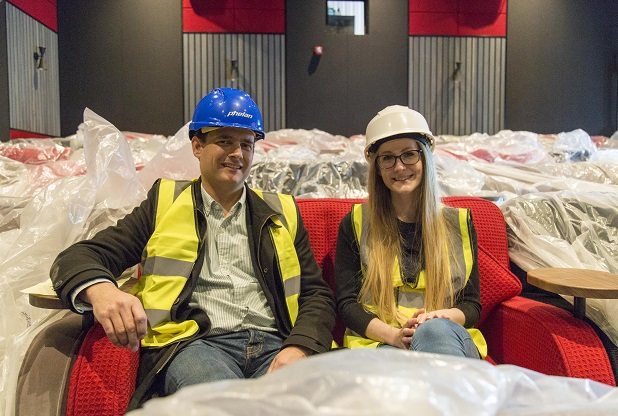 As part of our expanding editorial coverage Celluloid Junkie is launching the CJ Cinema Property Guide. Regular readers will recognise that this previously appeared as the ‘Cinema Opening/Closings’ section in our Digest. These items will now get their own weekly post, which we will be expanding and enhancing over time to track the many new and exciting cinema developments all over the world. Please continue to keep us posted and thank you for all of your support. – The CJ Team

UK – A first glimpse into the Chelmsford Everyman cinema opening in December. The five-screen cinema ranges in size from 58 seats to 114 seats. There is also a sixth screen with its own bar available for private hire. The cinema features special two-seat sofas were custom made for Everyman. “What we find is that, perhaps as they get a bit older, our customers want a really nice experience on a night out,” said CEO Crispin Lilly (pictured above in blue hard hat). Worth a few pounds more for sure. Essex live – 18 November 2016

UK – Hardhats are also on managers at the new six-screen Cineworld Harlow. The city’s second multiplex is opening on December 9th as part of GBP £9 million transformation of the Harvey Centre with restaurants and cafes. The town centre’s Odeon closed 11 years ago. Auditoriums will range form 259 for the largest screen, to 205-104 for the other screens, all with ample legroom. Harlow Star – 21 November 2016

UK – More details on the Curzon Aldgate opening in London’s East End next year. The four screens will have seating capacity of just 60 to 78 seats. It will be located just south of the Aldgate East tube (metro) station as part of a new seven-acre property development called Goodman’s Fields. Good news for Curzon which is facing closure threats for its Soho and Mayfair cinemas. Time Out London – 22 November 2016 UK – Plans for a Cineworld multiplex in Bestow have been cancelled in favour of a smaller seven-to-eight screen ‘niche’ cinema. The city council could not agree on a request for 300-400 car parking space demanded by one or more of the four large cinema operators (most likely Odeon, Cineworld, Vue and Empire). The council is now instead negotiating with a smaller cinema operator. Work is set to start in October 2018 and the cinema would open December 2019. Nottingham Post – 18 November 2016

UK – Stoke-on-Trent looks set to get an Imax theatre as part of a 10-screen Cineworld complex planned for Henley’s Unity Walk development. “The plan for an IMAX cinema comes just 12 months after Cineworld opened at The Hive within Hanley’s intu Potteries Shopping Centre. It already faces competition from the Odeon, at Festival Park, and the Vue, in Newcastle.” The nearest Imax cinema is currently in Manchester. The Stoke Sentinel – 18 November 2016

France – Kinepolis plans to open its first multiplex with laser projection near Toulouse in December. The multiplex in the new Fenouille gallery spaces will have eight screens all illuminated by laser projection, making it the first of its kind in France. The 1,161 seat-cinema will also have Dolby Atmos audio and seat reservation. Acts Cote Toulouse (FR) – 22 November 2016

USA (NY) – The AMC Loews Lincoln Square 13’s Imax has re-opened after extensive refurbishment that included installing laser projection, 12-channel immersive audio and new seating. “The AMC Lincoln Square IMAX is an important part of our legacy and continues to be among our most successful theatres in the world,” Mark Welton, President, IMAX Theatres is quoted as saying. AMC has already installed laser projection for its Metreon 16 in San Francisco, AMC Universal CityWalk 19 in Los Angeles, and Navy Pier IMAX at AMC in Chicago. Press Release – 18 November 2016