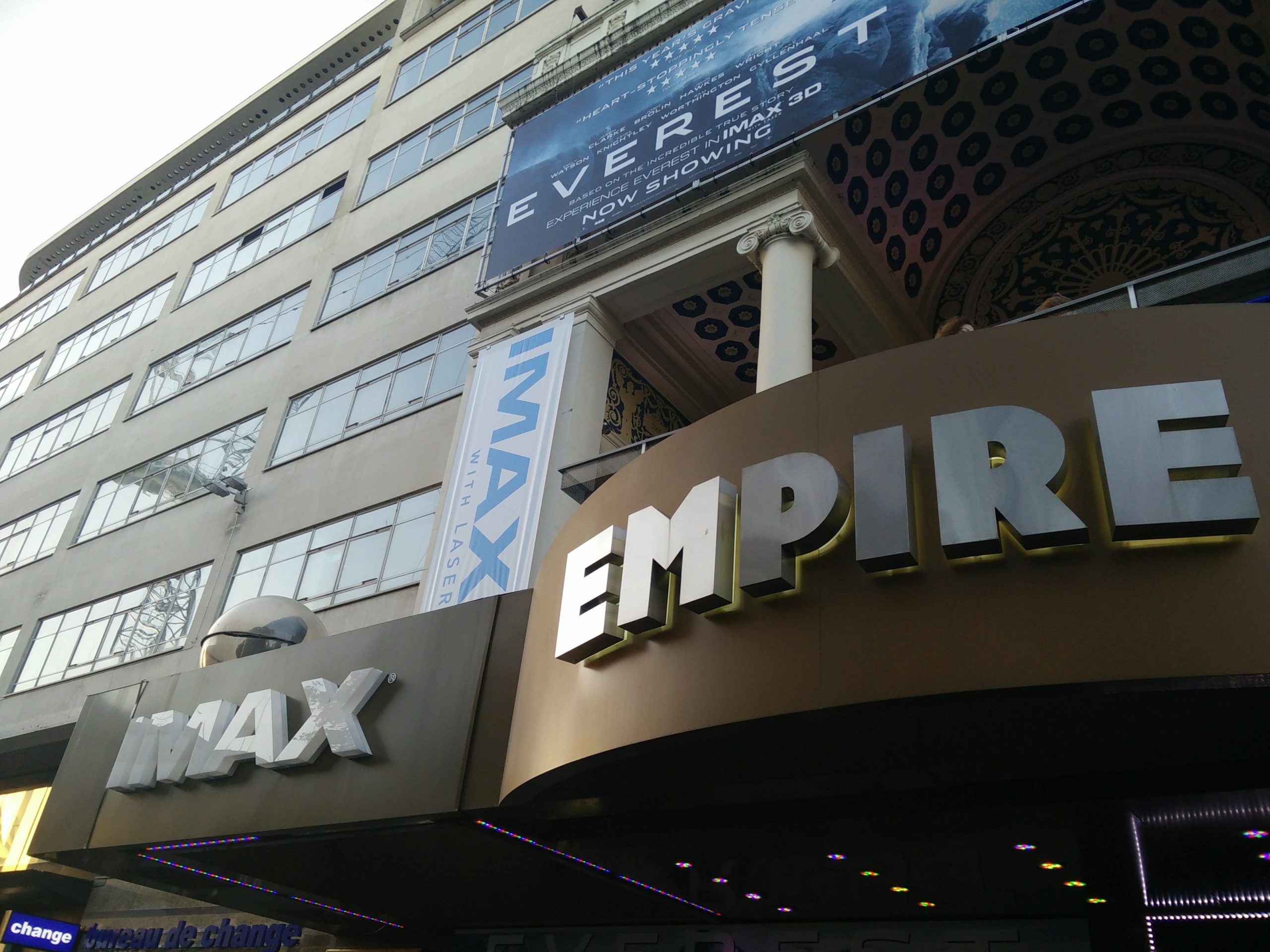 Cineworld has acquired the Empire Leicester Square and four more Empire cinemas totalling 54 screens in a deal valued at GBP £94 million. Four of these screens are Imax screens, including the UK’s first ever laser Imax. Coming a week after AMC’s acquisition of Odeon & UCI the move represents further consolidation, as well as Cineworld’s clear intention to remain the UK’s largest chain by screen count and Imax market leader.

Under the terms of the deal that was announced as the markets opened today (Thursday 30 June) to widespread industry astonishment, Cineworld Group plc acquired five sites from Irish-based Cinema Holdings Limited, the holding company of Empire Cinema Limited (“Empire”). Specifically these are:

Under the terms of the deal, Cineworld will in return also hand over the three screen Cineworld Haymarket to Empire, leaving Empire with a nominal presence in central London. Empire will be paid 50% in cash and 50% in Cineworld shares, which will be issued in five instillments over a 12 month period.

The Leicester Square, Basildon, Hemel Hempstead and Poole cinemas will all be re-branded Cineworld, while the Bromley cinema is likely to become a Picturehouse, which is Cineworld’s stand-alone art-house brand, given the site’s size, location and catchment demographic. Other than the Haymarket three-screen, Cineworld’s only presence in London’s West End was the Picturehouse Central multiplex near Piccadilly.

The deal had been a closely guarded secret, not surprising given that Cineworld is a publicly traded company, with industry insiders that Celluloid Junkie spoke to proclaiming themselves “gobsmacked.” It is most likely no coincidence that it comes less than two weeks after Wanda-controlled AMC was revealed as the buyer of Odeon & UCI.

While Cineworld is not thought to have been in the final running for Odeon & UCI, acquiring four prime Empire sites that all included Imax screens, consolidates Cineworld’s strength in the UK market against an Odeon that has been promised a USD $250 million to $350 million cash infusion for overdue upgrades to its circuit. Although Odeon & UCI has more cinemas than Cineworld (242 to 218), Cineworld has higher annual attendance (94 million in 2015 compared to Odeon & UCI’s 90 million) on account of more modern multiplex screens.

What Cineworld lacked compared to Odeon (and Vue) was a flagship London screen to host global premiers that would help solidify Cineworld’s standing as a (the?) leading cinema chain in UK and Europe. Cineworld wanted a higher presence and only Empire Leicester square could give them that, but Cinema Holdings was unlikely to only be prepared to sell its flagship site. However, Cineworld was most likely happy to boost its overall screen count. Adding in the other sites ensures that Cineworld has the UK’s leading screen count.

Cineworld had earlier signed a five-screen deal with Imax last month at CineEurope, taking its total count to 40 and ensuring that it remains Europe’s leading Imax operator. With the addition of Empire’s four Imax screening, including the prestigious laser Imax in London Leicester Square, this position is more assured than ever. Cineworld also has expansion plans for Dolby Atmos, with 50 screens planned until 2017, and several 4DX screens.

This acquisition brings Cineworld five modern and well invested venues complementary to our existing estate, including the iconic Leicester Square cinema in the heart of London’s West End. It underscores our commitment to operating high quality and modern cinemas across all of our nine operating countries, and our mission to be the best place to watch a movie. I’m delighted that the Anderson family, well-known cinema industry veterans, have entrusted these sites to us. We welcome them as shareholders in Cineworld and look forward to delivering increased returns to all of our investors from integrating these cinemas into our group.

Thomas Anderson, Chairman of Empire, gets quoted as effectively saying that these sites and employees have found a happy new home. He and the Anderson family now also becomes major shareholder in Cineworld, so there will be close ties with Cineworld, at least until the shares can be cashed in.

Someone who is perhaps less happy is Justin Ribbons, who has been building and running Empire Cinemas since it was created from the spun-off post-merger Odeon-UCI assets. He will now have to move out of the Empire Leicester Square and assuming he stays on (which is likely), will be left in charge of a significantly smaller operation, though one with an expanded war chest.

Post the sale/swap, Empire will be left with 12 of its old sites (also the Ealing site that has been lying empty and is due to be taken over by Cineword’s Picturehouse), plus the small Haymarket three-screener, for a total of 121 screens. These are mainly multiplexes located in the outskirts of London (Swindon, High Wycombe, Slough) and northern England (Newcastle, Birmingham). Empire is also only left with two of its original six Imax screens (Birmingham and Swindon). Cineworld has effectively cherry-picked the best sites where it was not directly competing with Empire, meaning the sale/swap is ensured to get the blessing from UK competition authorities.

So why did Anderson sell? Well placed cinema insiders say that the deal allows Cinema holdings to clear the borrowings that have funded Empire’s aggressive expansion, as well as conversion of the Leicester Square site. There had been an issue between Cinema Holdings and its bank in 2014 that led to a protracted court dispute. This deal should put Empire’s parent company on a firm financial footing, whether it needed the cash or not.

Well placed industry sources that Celluloid Junkie spoke to said that Empire also has two more signed sites for 2017. This means that the situation is similar to what Reel Cinemas did five years ago, when it sold seven sites to Odeon. This freed up cash for new developments, which may be what Empire and Justin Ribbons plan to do next. Subtract the ego boost of having a Leicester Square HQ and location from the equation and Empire still has a good stand-alone future. It will need to continues to grow smartly, by picking good locations and also continue to upgrade its existing screens as it has already been doing quite successfully. Empire may yet re-build its small empire.

The deal shows that even post the Wanda/AMC-Odeon & UCI acquisition there is still plenty of scope for deals in the UK market. Vue could in theory bolster its portfolio by acquiring the remainder Empire organisation, though geographical overlap means that they would be getting very much less than Cineworld did. Yet having ‘missed out’ on two big UK deals, Vue will be under pressure to make a move (The Light, Everyman or even Curzon are potential targets) ahead of its hinted-at 2017 IPO, so as not to be perceived as the smallest of the three majors in its UK home market.

Cineworld is doing well at the moment, with seven out of ten analysts currently rating the stock as ‘buy’ while three as ‘hold’. According to Cerbat Gem:

Cineworld has stated that the deal “will be marginally earnings enhancing for Cineworld within the current financial year and provide high single digit earnings enhancement in 2017.” More significantly, the deal enhances the competition between the major UK and European cinema operators more than ‘marginally’, as a very interesting first half of 2016 comes to a close.

[This story will continue to be updated as we get more details, input and insights from our industry colleagues.]