European cinema services major Ymagis has announced a corporate re-structuring and re-branding into two distinct units (PDF link). The announcement was made alongside the company’s Q4 and year-end 2015 financial results, which point to a post-VPF future as Austria became the first country to complete its VPF repayments.

Ymagis has decided to keep its own name purely for the financial markets, while the customer-oriented business will be divided into two distinct units of exhibition and content services. All three will, however, be unified by the new corporate branding of the ‘flash’, taken from the Eclair business.

CinemaNext will be the exhibition services business. Taken from the name of the UK consulting and financial advice division – which will be re-branded as CinemaNext Consulting – the name is meant to project a future-oriented services and technology division for the cinema sector. Its main office will be in Liège (Belgium), where dcinex was headquartered, with 17 additional offices across Europe.

The business unit is divided into four divisions:

The idea is to be the ‘trusted partner’ for cinemas. CinemaNext anticipates a replacement cycle for digital cinema equipment kicking in, as well as upgrades to nex technologies such as HDR laser projection and immersive audio, as well as a steady growth of about 1,000 new cinema screens in Europe per year between 2016 and 2020. 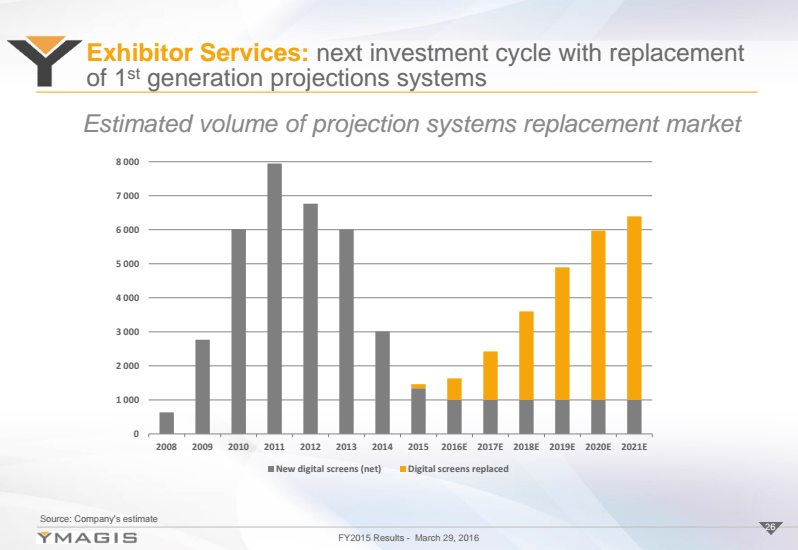 Building on a tradition and brand that has been in existence since 1907, Eclair will house all of the company’s content services, which are seen as the main growth area for the company in the coming years. While not stated explicitly, the vision appears to be for the re-born Eclair to compete with and fill the role traditionally reserved for Technicolor and Deluxe, now in the digital age.

The new Eclair will be headquartered in Vanves (France) with 10 additional offices, mostly across Europe, but also in Rabat (Morocco) and New York (USA). It will incorporate Smartjog Ymagis Logistics. Ymagis estimates that it will achieve better integration when it streamlines the three satellite platforms, a slow and long process that involves upgrading over 3,000 receivers and re-pointing satellite antennas. The changeover is completed in Spain, with France to be done by May and Germany next.

The Eclair business unit is divided into six divisions:

The company is pinning great hope to the growth potential of services such as versioning, i.e. subtitling and dubbing, and accessibility, such as audio description for the visually impaired. In addition restoration and preservation of large media libraries across Europe and beyond is seen as an under-services sector. While Eclair has traditionally been strong in this areas in France, the ambition is now to take this across Europe and beyond.

Ymagis posted revenues of close to €158 million for the financial year of 2015. The numerous acquisitions means that it is not a like-for-like comparison, but Ymagis has broken our pro-forma revenue. Revenue was up +4.8%. While the VPF business was up +3.2% overall, there was a dip in Q4 on account of Austria (268 screens) completing its VPF payments and the number of major titles released. Even so, new territories came on line with Greece and Balkan (late 2014) and Turkey (April 2015).

Exhibitor services was down -10.4% to €59.4 million. Downtrends were offset by new builds, upgrades to new technologies and contributions from Proyecson and R2D1. Content services was €10.5 million for the FY 2015. For the 12 month period revenue was up +93.4% to €24.5 million, demonstrating why Ymagis is putting so much faith in the future growth potential of the division.

2016 is seen as a year of consolidation and the implementing cost-saving measures and synergies across the Group’s various units. It is worth quoting these in full to get a grasp of the company’s future direction:

(2) the conclusion in late April of the restructuring of the Eclair Group’s primary business activities following its takeover in August 2015,

(3) the implementation of a costsavings plan across the Group,

(4) the execution of a limited number of external growth operations to increase synergies based on each operation’s ability to improve short-term profits, and, finally,

(5) the hiring of a number of managers to oversee each of the operational divisions added following the acquisition of Eclair’s primary business activities.

While companies such as Kodak, Technicolor and Deluxe made the mistake of clinging on too long to analogue film at the expense of future business development, it is clear that Ymagis is not going to repeat the same mistake with VPF financing being the eroding pillar of its business. In setting up its business between the two brands of CinemaNext and Eclair it is clear that CEO Jean Mizrahi and his team are intent on building a company for the long term cinema future.