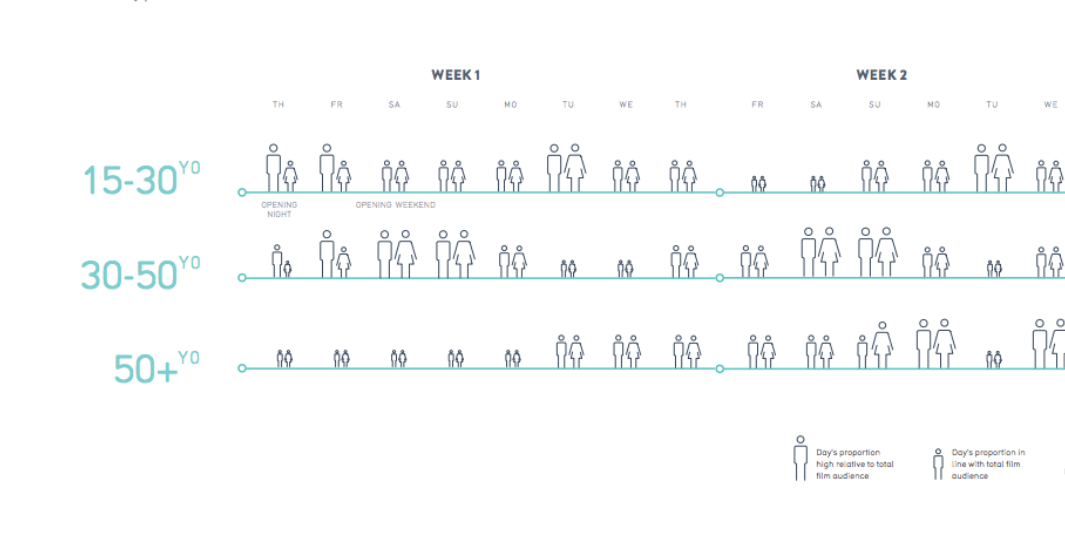 The tantalising promise of Big Data enabling better understanding of customer behaviour and leading to more tailored promotion and offerings is starting to reach the cinema business. Movio has published a white paper called “Breaking the Blockbuster Code: Audience Evolution Patterns Revealed” that looks at audiences for tentpole films and who exactly makes up the opening weekend. Written by Movio’s Chief Data Scientist Bryan Smith it both confirms and confounds some traditional assumptions.

Movio went about this by picking ten of last year’s top blockbusters (“Furious 7”, “Jurassic World”, “Star Wars: the Force Awakens”, etc.) and analysing the moviegoing habits of eight million loyalty card members for cinemas in the US, weighted for demographic ‘bias’. By necessity it does not include movie goers under the age of 14, though this was said not impact the conclusion or the findings. Audiences were then split into six groups based on age (15-30 yo, 30-50 yo, 50+ yo) and gender.

Several interesting trends emerged, some of which are highlighted in the graphics extract above. The greatest consistency was found amongst two distinct groups: young men and older women. The former tender to be over-represented and the later under-represented. [So far, so un-surprising] But this changed over time, with older women “whose share of the (decreasing) audience increases over time regardless of the type of movie.” The other four demographic groups on opening weekend they are likely to be over-represented, but only if the movie in question is targeted at them. The group 30-50 year old men and women behave like the most typical ‘average’ cinema goers.

The study was then extended beyond the weekend to look at the first and second week of movie going. Young movie goers feature strongly on the Friday/opening night and on Tuesdays (cheap promotional night), while 30-50 year old are best represented on Saturdays and Sundays. If you are a 50+ movie goer, it seems you have no particular preference when it comes to movie night.

The study makes clear that some of these trends are likely to be driven by avid movie goers (defined as 12+ visits per year), so next the study considered how the proportion of casual movie going changes over time. The graphics for male movie goers below tells an interesting story.

It shows that the older the movie goer the more likely he (and to a large extent the same holds true for females) is likely to take longer to see a film, if he is a casual movie goer. This does not just mean, as the study makes clear, that opening night or weekend audience patterns are representative of a film’s lifetime audience, but that films that are aimed at an older audience (think “Bridge of Spies”, which was not in this study) need to be programmed for longer runs in order to cater best to their demographic.

Movio then asks what the implications are for the marketing plans of Hollywood studios. Now that they know who is watching when, how do they spend their money best to entice people to the cinema? Given the pattern in the evolution of blockbuster audiences, should marketing reinforce the pattern or try to shift the pattern to get a better spread of audiences in the season? And how should the the differences between high and low frequency moviegoers be treated? 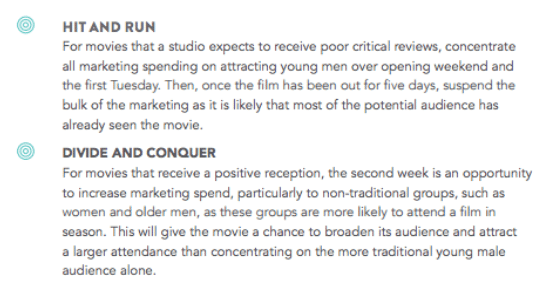 What used to once be gut feeling, augmented with clipboard-based exit polls is increasingly a numbers driven and even real-time data business. It is clear that there is a new territory for both exhibitors and studios in accessing behavioural patterns of cinema goers. If cinema is to grow in mature markets, all parties will need every last bit of intelligence they can extract from data insights such as these. And good movies – of course.