This article is re-printed from Gruvi’s blog by kind permission from the author Ben Johnson, the company’s Founder and Opportunity Architect.

The current lack of quality, independent, original screenplays for more discerning viewers is the subject of common complaint against much of what Hollywood finances. Looking at the great line up of movies that recently failed at the box office highlights an interesting paradox in the movie industry today. Here are 10 recently released films that failed to engage audiences in their opening weekend, despite having good reviews and a strong cast. At the moment it looks like they are destined to be financial flops. This is how the industry chooses to pigeonhole films that fail to make a splash on their opening weekend.

In our research the common trend that’s emerging is that theatrical releases hardly ever benefit anything other than blockbusters. The opening weekend is currently an important chapter in the film release rule book, but we believe it has become a totally inaccurate measure for most movie releases.

Backed by good reviews and major star power, films like Bridge of Spies (starring Tom Hanks) or Truth (starring Cate Blanchett and Robert Redford) had weak opening weekends. Not even the pull power of Meryl Streep was enough to reel in audiences for the opening of Suffragette. These are films that critics appreciate, that the audience have been asking for and that are generally liked by those who do go to see them. But few people do, and news of a ‘failed’ opening weekend limits word of mouth potential to the point where good reviews cannot compensate.

This may be the result of all these movies having been released at the same time. Given that their target demographic is very similar, the audience may have been diluted. Furthermore, the size of the cinema going public in general is no longer as large as it used to be. Audiences have consistently declined in a context where ticket prices are increasing. Compound this with changing viewer habits: The public now has access to alternative content (mainly TV shows) that often equals or even surpasses theatrical releases. And even if consumers choose to watch movies, they can opt to do so via streaming or VOD. Today technology is empowering them to choose more convenient and cost effective ways of accessing content.

These ten recently released films prove how financially risky banking on the opening weekend can be!

Room earned a little over $100 000, opening in the US to 4 cinemas. This small scale opening means costs were low. By comparison, Burnt opened in over 3000 venues simultaneously. While the first earned an average of over $29 500 in each of the 4 cinemas, the second cashed in an average of as little as $1 600- this is before deductions, marketing costs, etc.

For a film to be considered a success, it should earn half of its expected total revenue in the opening weekend. Success is defined on the studios’ terms as they receive 50% of the profit immediately after the release.

But experience shows that opening weekends are a questionable metric. Even successful movies don’t match up to that standard. Out of the top ten releases of 2014, American Sniper earned over $350 million. It only opened in 4 cinemas. With an initial gross of $633 000 dollars, the film effectively only made 0.18% of its total box office in the opening weekend. American Sniperis the outlier. The other films in the top ten made between 20 and 40% of their total revenue in the opening weekend. The only other exception was Transformers: Age of Extinction, which earned over $100 million, almost 41% of its total revenue.

Avatar and Titanic (at number 1 and number 4 respectively) earned well under the typical 20 to 40%?—?10.3% of total revenues in the opening weekend for Avatar and just 4.8% for Titanic. 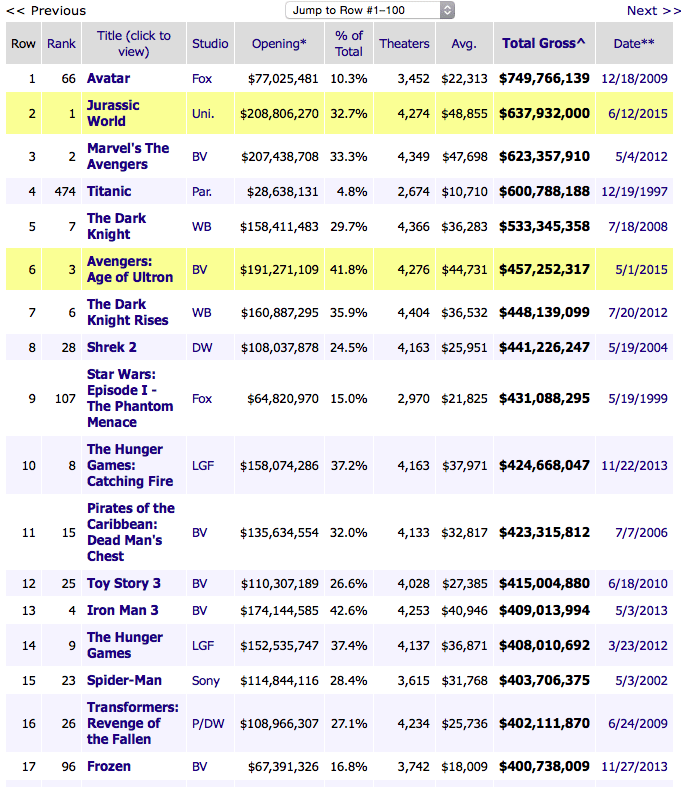 So if the theory frequently does not hold even for blockbusters, why are films still measured on the standard of the opening weekend? The reason is that exhibitors are fiercely resisting schemes such as simultaneous releases.

The recent case of Beasts of No Nation highlights this. Some exhibitors refused to show the film at all in the conditions of a day and date release. Screening a film involves a sunk cost that cinemas were afraid they are not going to recoup if viewers can easily choose to watch Beasts on Netflix, instead of paying extra for a cinema ticket.

This is one case in which the poor performance during the opening weekend will turn into a poor theatrical performance. Netflix’s strategy does not focus on theatrical. The aim is to reinforce Netflix as a producer of quality original content in order to boost subscriptions. Having a theatrical release also qualifies Beasts of No Nation for awards such as the Golden Globes and the Oscars. They are following the same path that led House of Cards to be the first ever non-network produced TV show nominated for the Emmys.

We are witnessing the industry going through a new phase. Slow but steady gains are seeded rather than providing immediate returns. These also come with marketing expenditure that follows the same pace. Instead of sinking costs into prints and a big campaign to back a nation or world-wide opening, a limited release can attract a very precisely targeted audience. Minimizing the window to the VOD release, the film can benefit from strong word of mouth support that can help reduce the marketing costs.

The key relies on putting the effort into constantly seeking out the film’s audience. Once identified, each member of that audience should be able to enjoy the movie as soon as possible.

In the long run this could increase the number of small and middle budget films being made. As we have signaled elsewhere, their number has sharply decreased in the last 15 to 20 years. Focusing on alternative distribution does not necessarily imply much smaller marketing budgets. It does however mean that they will be spent over a longer period of time and that they will be invested predominantly in actions that have proven results and not just buzz-making value.

Immediate and more widespread change is prevented through the politics of the industry, but alternative distribution is gaining traction. In the process it’s eroding the long held constructs — the relevance of the opening weekend — by supporting the empowerment of both filmmakers and viewers to the detriment of industry middle men.