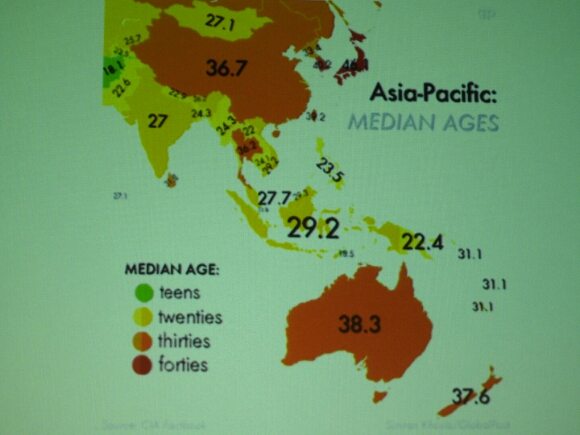 This is a real-time transcript of one of the sessions at CineAsia 2015. As such, we sometimes paraphrase what is being said by the speakers. Any errors are more likely than not our fault.

The first panel of the second day of CineAsia 2015 looked at the issue of demographics and aging cinema-going populations across Asia. The session’s moderator, Sunder Kimatrai, Executive Vice President, Asia Pacific, Twentieth Century Fox International, had really done his homework and began with a detailed and thought-provoking overview:

“Asia region is diverse  hard to consider AsiaPac as one homogeneus market. Economy, language, culture – taste and movie going habits differ. All kinds of variables. I will try to break it into clusters. Depending on country we are in third or fourth generation multiplex development, though Laos, Myanmar and Cambodia just starting out. Others are renovating as we go. But the multi-screen experience is universal.

One factor is common. Our consumers are getting older. World map with colours indicating media age. Europe and North America and Japan are old. Asia is in its 20s and Africa in its teens. In Asia, Thailand, Taiwan and Sri Lanka consumers are surprisingly old. Consumers are not just old now but they have been getting older for some time. This doesn’t necessarily tie in with movie going – this media age graph is a proxy. Chinese media age gone from 2005 32.3 to 2015 36.8 in age. 34.1 to 39.7 in Taiwan and with even lower birth rate. Japan is now 46.5 from 2005 when it was 42.6. Australia has managed to keep age not so old thank to immigration. This suggests what limit might be to movie going as we move forward.

Singapore outlier, liberal immigration, young people from India and China, to manage aging population. In 2005 it was 36.7 and in 2005 it is younger at 34.0. We have seen business grow Significantly. Thailand is significantly old at 36.7 now compared to 32 in 2005. Emerging markets show promise, but there is little cinema infrastructure. Sri Lanaka and North Korea are surprisingly old (32..1 and 33.6 respectively). What does it mean?

Looking at countries where consumers have ages, we track cinema going over time. Gone back five years we see Korea has grown dramatically. Thailand has grown but stagnated recently. Hong Kong stagnated a little but from high base. Looking at admissions is more revealing. Success of Korea in generating traffic is interesting. Taiwan less so, but proportions are there. Looked at locals films Hong Kong declined from 33% on 2005 to 26% in 2014, but hard to read too much into it given geopolitical changes. Japan went from 41% in 2005 to 58% in 2014. Growth of film industry came about as industry aged. 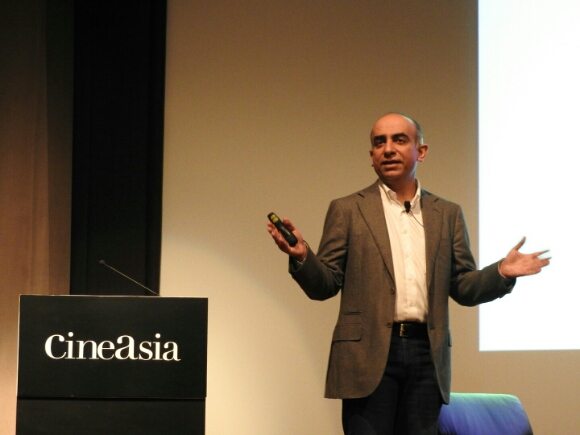 I compared Devil Wears Prada and The Intern for data. Anne Hathaway appears in both. Both take place in workplace. Older character along Anne Hathaway. I was intrigued by success of The Intern in some markets. BO Mojo data showed that in aging markets the appeal for a film like this, with De Niro’s story, the BO has evolved. Hong Kong went up three-fold ($1.6m to $3.8m million). Singapore only up a little, Malaysia same figures.

What doe this aging trend mean, what are the implications for future growth of box office? What are programming decisions by bookers and programmers? Hwo do we evolve our season? Bridge of Spies took time for film audiences to find. Do we stretch out our season ti give older audiences a time to find a film? What are opportunities for local films? Concession offerings and amenities? Session timings? Studio slates?

And with that it was time for the panel:

Sunder jokes, “we are quite a mature panel, aren’t we?” Yes, they are.

Don – Aging is not something Imax has considered. We are more focused to blockbusters. But if you look at the long term loyalty of the franchises we show, that points to aging loyalty.

Irwing – Malaysia is a young market but we have a large population that has matured, but they have a growing affluance. That helps us move into the Premium and VIP market. People want to look at movies in more luxrious setting. But fundamentally still young. 14-30 age is 70% of market in terms of admissions.

Mark – In order to keep young audience coming you have to create atmospehere and ambiance of the audience. 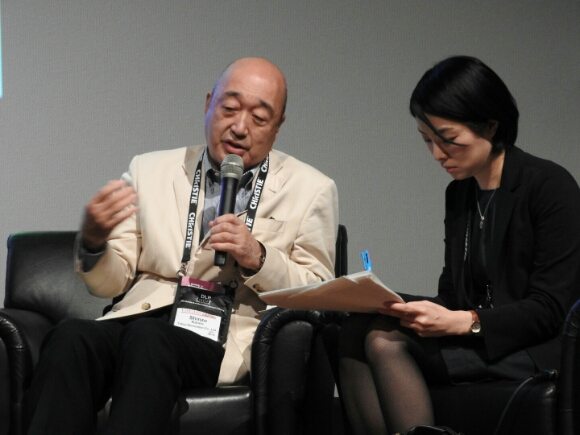 Shinzo (through translator) – During these two years Japanese films have occupied 58% of box office and I feel that this is because the target of Japanese films is good for Japanese audiences.

Bob – In China the population keep increasing so we don’t worry so much about aging audiences. In Hong Kong there are many, many mainland Chinese that have come. Gone form 6.5 to 7.5 million in a short time. HK suffers from a lack of screens. Because basically during peak period all cinemas are 78-100% occupied. Because of high rents in Hong Kong from the landlords (want to make clear it is from landlords, not studios or producers), they have elected to take back square footage from cinemas being redeveloped. Case: Pacific Place UA opened cinema in 1989 when it came up for second rent review the landlord said, “Hello Bob, I want 70% of your square footage back.” My reaction was, and you probably still want higher rent. He did. So we end up with boutique cinema, with less screens and less seats and less box office and hence higher ticket price. In America, they are concerned that when ticket pries go up there is drop off in overall attendance. But in HK there is sold out screens anyway. You will see a huge population of school kids in the afternoon. So consumers have adapted to environment not getting a ticket. In HK media is 16 years of age and up to 36 if they are not married. If people marry, cinema attendace drops and if they have kids it goes down almost to zero, but as they get older cinema going goes back up. So old people are coming back.

Shizo – I feel that today younger people find entertainment through games and internet. With so many entertainment options, we in cinemas have to offer the most advanced technology option to them. Japanese movie industry makes many different kinds of discounted services for younger audiences, so they can frankly come to movie theatre. In the past 10 years the population is 120 million and movie goers is 170 million and the numbers stand still. To look at those numbers those discounted services make success or not, I am not sure. We have to think of how to increase the number of movie goers.

Mark – I will always bring the conversation back to infrastructure in each contry. Asian region went through the renaisance of the great cinemas and they have had that for a long time. Compare to Latin America, not as old as Asia, so they are creating that cinema going experience and it is booming. Because Asia has the amazing cinemas, Asia tends to be ahead of the curve. Through innovation, through VIP, though IMAX (growing quickly in Asia), 4DX, D-Box, all these innovating technologies bring back audiences. Stiudios have always done entertaining films but as you see infrastructure grow you see audiences grow.

Don – In China we are about same in terms of our audience and average audence age. But interesting thing is not just how quickly cinema and online retail is developing. Malls are now lifestyle centres. Cinemas driving force of these lifestyle locations. They have changed rapidly with consumers. 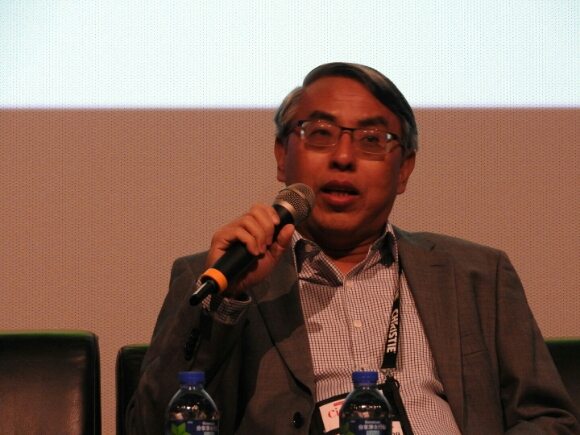 Irving – In Malaysia where we have a mixture the youg age is a sweet spot, but the techonlogy has gone a long way to bring back all the generations. We see animation bring in young market and also the young adult market. So we see three generation families coming back to cinema. Leverage to plus-plus. Window is still an issue as to whether we have enough screens to keep films on long enough for middle age group, who are busier in their life. We try to add more creens and it generally works well for us. As we go into Vietnam we look first for reach and then for differentiation.

Mark – Tough to just look at the dollar standpoint. I would be curious to see what Japan did in terms of currency adjustment.

Bob – Reason Hong Kong BO is flat is because less seats and because local production had huge movies in the past up until 7-10 years ago and now they have realised that market is so huge in China that they are aking films for the tatstes of China and those tastes do not work in HK.

Qusetion from audience – In the future, any challenges you are prepared for like Netflix. What are you expecting there?

Irving – In Asia and Malaysia we have been affected by piracy since the 1980s and financial crisis in 1990s, so we have deveoped infrastructure, because you will not havw 10m or 20m screes at home.

Bob – Young kids in HK have been downloading illegally for a long time already. Going to the movies is a shared experiece. It is going to take a lot to knock it out. I remember when TV came… [audience laughs and claps]

Don – If kids are texting and say they love the film they are watching, that can help films and cinemas.

Shinzo – I feel Japanese customers always depend new stimulation and inspiration. Movies should be catalyst for inspiring stories for audiences. We installed for laser Imax in Osaka and it created a big buzz in Japan.

Sunder – Out industry has seen off many challenges from the sofa. My issue with Netflix is that they distract people from media that involves consuming advertising to ones that do not. It has profound effect in ad delivery.

Mark – Totally agree with you on that.

Bob – In Hong Kong people like to do two events. They like to go out an eat and go to the movies. The question I get the most is “When is Avatar 2″ coming out?”

Sunder – As soon as I know I will let you know.

The session finishes with Bob telling the story of what happened to cinemas (and restaurants and other places) when SARS broke out in Hong Kong. Empty and deserted. 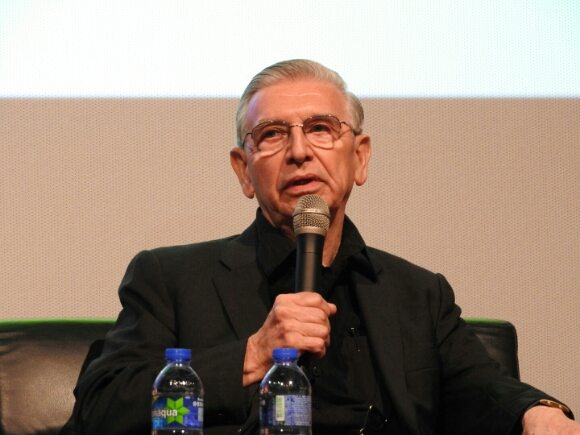