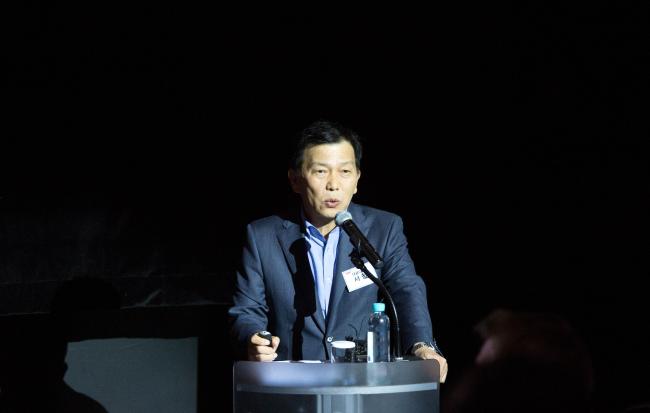 South Korea’s CJ CGV has gone public about its ambition to become the world’s largest cinema chain through “aggressive expansion” in the United States, couple with growth in emerging markets like India and Latin America. The aim is to have 10,000 screens globally by 2020, with 700 million cinema goers, meaning that it would overtake current global giant Wanda, which has cinemas in China, US and Australia.

CJ CGV’s CEO Seo Jung gave a candid and bullish talk at the CGV-owned theater in Cheongdam-dong, as reported by Korea Times. “My goal is making CJ CGV the world’s largest cinema chain,” Seo said at the press conference. “There is still a long way to go and there are many hurdles lying ahead. But it doesn’t mean it (the goal) is something impossible to achieve.”

The strategy is to achieve the goal through “aggressive expansion” in the United States, meaning that the company is intent on acquiring on of the major cinema chains: Regal, Cinemark or Carmike. CGV had apparently tried to buy independent art-house chain Sundance Cinemas earlier this year, but the deal fell through and the chain was instead acquired by Carmike Cinemas for USD $36 million. “We feel the need to expand the size of corporate body in the U.S. market with mergers and acquisitions,” Seo is quoted as saying. “We keep searching for companies that are worth the investment.”

The other focus area for CJ CGV’s is in emerging markets, primarily in India and Latin America (Brazil and Argentina), though no specific plans were outlined for these territories. The Korean major plans to acquire 3,500 out of 10,000 screens through mergers and acquisitions, while the rest will be through own investment or strategic partnerships with overseas cinema chains.

CJ CGV already has a strong presence throughout Asia, with the number of screens outside of Korea set to overtake its domestic screen tally in 2016. As the world’s 10th largest exhibitor, CJ CGV currently has 1,735 screens across 233 cinemas in six countries:

CGV will also open its first multiplex in Malaysia in 2016. In total it welcomes 170 million patrons per year across all of its properties. The aim in the short term is to enhance the exhibitor’s presence in South-East Asia, primarily in Indonesia, Vietnam and Myanmar.

CGV already has a strong presence in Mainland China where it is the seventh largest operator by screen count. Significantly, CGV has a strategic partnership in China with local and global leader Wanda Cinema Line, with whom it entered the market in 2006. CGV’s China business is reported to have turned profitable for the first time this year.

CGV also has dealings with Wanda through its Screen X and 4DX premium screen and seating divisions. Seo claims that“CGV’s weapons will be its special technology-based theaters like 4DX and Screen X,” with the company’s next venture being Sphere X, a vertically curving screen that will envelope audience with image and sound.

The ambition to have 10,000 screens within half a decade may seem outlandish, but as Seo observes, “This may seem like explosive growth to us, but on a global scale the difference we make is hardly visible.” As we have written before (“Why Vue’s Acquisition of JT Signals Merger Mania Ahead“), there is a race underway for mega consolidations in the global exhibition sector, with cinema majors such as Cinepolis, Vue, Cineworld, and CJ CGV at the forefront following Wanda’s lead to establish ‘10,000-Screen Club’. This will give the cinema majors major bargaining power in negotiating terms with everyone from Hollywood studios to cinema vendors and suppliers.

Interestingly CGV seems cool to the idea of acquiring any exhibitor in Europe (sorry, Odeon), whilst recognising the strategic importance of having  a significant presence in the North America market, combined with emerging markets like Brazil and India. Although Regal has formally removed its ‘For Sale’ sign, it is very likely that discussions have or are going on, though the sheer size would make it challenging to absorb in its entirety. Carmike seems an easier acquisition, whilst Cinemark would give CGV immediate presence in the Latin American market.

Any of the Indian majors – with the exception of Cinepolis, for obvious reasons – could also end up in CGV’s orbit and exploratory talks have no doubt taken place with PVR, Inox and Carnival. This should all make for interesting discussions on and off-stage at the upcoming CineAsia gathering in Hong Kong next month.