USA (CA) – Is AMC too over-leveraged (i.e. in debt) to execute its ambitious plans for re-seating and expanding premium F&B to stay ahead of the competition? That’s the upshot of this persuasive piece of analysis from Seeking Alpha. Pay particular attention to the penultimate paragraph, which points out that in 2014 around 66% of AMC’s operating income went towards servicing interest expenses, while in 2013 almost 3/4 of it went to debt interest. “The company frankly does not have the cash flow to both meaningfully pay down its obligations ahead of time and make all the updates to its facilities.” Seeking Alpha – Michael Boyd – 27 August 2015

Germany – Ticketing enterprise CTS Eventime has bought a 51% stake in Munich-based cinema ticketing operation kinoheld GmbH (German for ‘cinemahero’). In addition CTS Eventide has committed to funding the expansion and growth of the company. CTS Eventide already has cinema ticketing operations in Italy and Spain. kindled was set up in 2013 to provide state-of-the-art online ticketing, including, electronic ticketing and access control, to cinemas. It currently has more than 250 cinemas under contract. RTT News – 1 September 2015

UK – Is Vue considering buying Odeon? So far there seems little more than speculation to any concrete bid, with Vue stating plainly “We are not considering it today.” The price of GBP 600 million mentioned in the Sunday Times article would also be a significant discount on the GBP £1 billion previously mooted, but would effectively factor in the significant upgrade costs to make a slimmed down Odeon-UCI chain match Vue’s quality standards. The Sunday Times (paywall) – Peter Evans – 30 August 2015

India – India’s largest state UP has waived entertainment tax – which can be up to 40% of ticket price – for multiplexes in Noida and Greater Noida in their first year. In the third and second year they will receive grants equivalent to 75% and 50% of entertainment tax. In other areas of UP there will be 100% exemption for three years, followed by 75% for fourth and fifth year. India’s central government is trying to replace such local taxes with a national GST (good and services tax). The Indian Express – 2 September 2015

USA – Hexa Report has published research into the global digital cinema market called ‘Global Digital Cinema Screen Market 2015-2019.’ However, I am somewhat sceptical as the report lists Doremi Labs as on of the ‘Key Vendors’ profiled (the company was absorbed by Dolby last year) and listed top under ‘Market Challenge’ is “Lack of Single Digital Standards”, which makes me wonder what all those people at DCI and SMPTE got up to in the past decade or so. Press Release – July 2015

USA (MI) – CJ 4DX has signed an agreement with Marcus Theatres to open a motion-seat screen in its Marcus Gurnee Cinema in Chicago this October. The deal puts 4DX in the top three US markets, following earlier deals with Regal for cinemas in Los Angeles and New York. THR – Carolyn Giardina – 1 September 2015

Australia – Police in Adelaide are on the look out for a man accused of assaulting a woman in an Event Cinemas multiplex in the Morayfield Shopping Centre on 19 August. The Courier-Mail – Amy Price – 31 August 2015

France – Ymagis has appointed Bouchra Alami Vice President of Versioning and Accessibility Services at its newly acquired Éclair Media. She has previously worked with Alpha CRC, Les Editions Larousse and Teletota, which merged with Éclair in 2011. Press Release – 1 September 2015

India – Inox has crossed the threshold of 100 cinema in India with the opening of three properties:  R World Rajkot and R World Adalaj in Gandhinagar, as well as R World R21 Gandhinagar. Inbox has presence in 54 Indian cities with a total of 389 screens. Inbox also acquired two cinemas with a total of six screens in the state of Gujarat. Press Release – 2 September 2015

USA (MI) – Carmike Cinema is opening a new multiplex in Buffalo Ridge with 13 regular screens and one Imax. The PLF screen was originally meant to be a Big D screen, but after Carmine signed a deal with Imax the own-brand PLF plans for it were ditched. The multiplex will replace Carmine’s existing 10-screen operation nearby and is scheduled to open later this year or early 2017. Dan Nielsen – Record-Eagle – 29 August 2015

France – French No. 2 chain CGR has opened a new multiplex in Vitrolles with 12 screens and 2,500 seats (208 seats/screen average). It is the first new multiplex to be entirely equipped with Qalif Optimiser technology from Highlands Technologies Solutions (HTS) for remote quality monitoring. HTS is the venture by Patrick Zuchette, formerly head of Doremi. Press Release – 29 August 2015

USA (MO) – One of the last “dollar show” theatres in the US is to remain open, having previously announced that it will close on 1 September. St. Andrews Cinema in St. Charles announced on its website that it would keep running and new management would take over before the end of the year. St. Louis Post-Dispatch – Samantha Liss – 31 August 2015

UK (Wales) – The opening of the new Cineworld at Friar’s Walk in Newport will lead to the creaton of at least 40 jobs. The cinema will feature eight screens and a Baskin Robbins when it opens in November. WalesOnline – Chris Kelsey – 28 August 2015

USA (VI) – The newest cinema in Charlottesville is opening in time for the Virginia Film Festival. Violet Crown Cinema replaces the Regal Cinema in a downtown mall as the festivals HQ when it runs in early November. This is the third premium-dining Violet Crown Cinema in the United States. NBC29.com – Spencer Burke – 1 September 2015 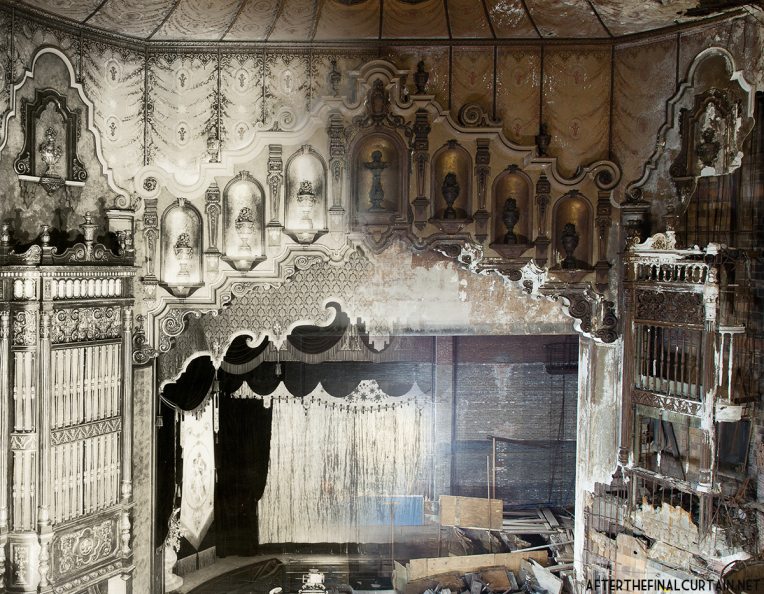 We direct your attention to a terrific blog called afterthefinalcurtain.net chronicling abandoned and closed cinemas. There is something haunting about these images, not least the one above that blends old and new photos of the Loews cinema in New York to eerie effect.

The Loew’s Canal Theatre opened in September of 1927 in New York, New York. The Loew’s Corporation contracted with Thomas W. Lamb, one of the foremost theater architects of the 20th century, to design a theater on Canal Street in Manhattan. The 2,314 seat theater was the second largest motion picture theater in the city when it opened. Even though it was a larger theater, it mostly showed “B” movies and serials. Loew’s sold the theater to the Greater M&S Circuit a little over a year after it opened, and bought it back when they went bankrupt in 1929.

It was damaged during a series of bomb attacks that were thought to be linked to the striking Motion Picture Operators’ Union Local 306.