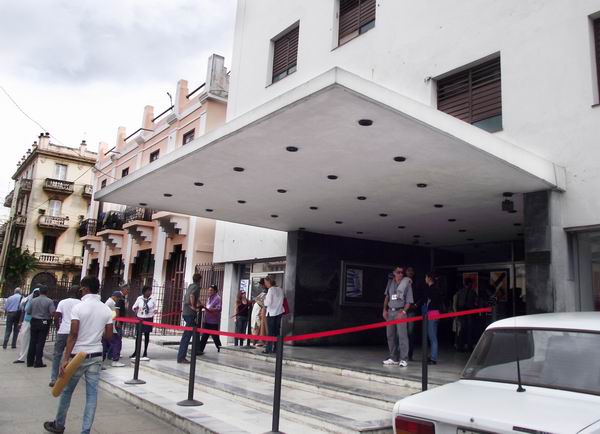 With Latin America and the Carribean belatedly converting to digital cinema, Cube looks set to be the last country in the region to make the transition. Despite the recent thawing of relations between the communist island and the US, the country’s cinemas remain in the control of the state, which has not prioritised digitisation. With 35mm set to be phased out, it remains to be seen how much longer Cuba can sustain its analog cinema network.

Cuba is estimated to have 300 cinemas and only slightly more auditoriums, given that most venues are single-screen operations. Of these only two cinemas in Cuba currently have DCP capabilities: the Yara and the Chaplin, both in the capital Havana. A third cinema, La Rampa, will be digitised next following an agreement between the Cuban Institute of Cinematographic Art and Industry (ICAIC) and France’s CNC, which will also involve scanning and restoring older Cuban films.

Some cinemas, such as the Prague cinema in Pinar del Rio and the Cuba cinema in Santiago de Cuba, do have more basic digital projectors and can play film off DVD players. However, during the French Film Festival the organisers were unable to play “Return to Ithaca” at the Santiago cinema because the equipment did not support DCPs.

The refurbishment and digitisation of both Yara and the Chaplin was only made possibly by donations from foreign agencies, who are also involved in the long term maintenance of the equipment. A team from Spain installed and conducted a training course for the staff of the Yara to be able to run the digital equipment themselves.

The first DCP to screen in Cuba was Argentina’s contender for the Best Foreign Language Oscar “Wild Tales”, which screened at a special showing at the Karl Marx Theatre. The screening was nothing less than a revelation to this who saw a film free of scratches, dirt, flicker and grain, according to 14Ymedio. The 35mm prints that are shown in Cuba were often prints of films that had been shown in other Latin American countries first, meaning that by the time they arrived they were often in poor shape. Poor maintenance of analogue equipment also meant that film reels would tear and have to crudely re-spliced.

With downtown Havana alone having 23 cinemas, there is thus a wide gap between analog and digital. Cinema audiences have been in decline in Cuba for many years, though according to ICAIC’s Director Roberto Smith, this is not just due to the failure to convert to digital but has many causes, not least the ready availability of pirated films and TV shows on DVD in the black market.

As reported in the New York Times independent digital film making has mushroomed in the last few years, though the resulting films tend to be self-distributed on DVDs rather than screened in cinemas. The Cuban government has also clamped down on private screenings two years ago, stating “the showing of movies, including in 3D salons, and likewise the organisation of computer games, has never been authorised.”

The heat, dust and humidity in Cuba, coupled with old cinemas without air conditioning or even proper ventilation, means that maintaining digital equipment is a challenge. As 14Ymedia puts it, “Most Cubans cinemas do not have optimal conditions to welcome the new infrastructure.” Extensive refurbishment would be required in nearly all cinemas before digital projection could be installed.  While Yara’s projectionist is proud of his digital projector and praises its ease of use and versatility, the cinema has maintained its 35mm projection capability to be able to show legacy films.

14Ymedio estimates that it would cost more than USD $30 million to convert all cinemas in Cuba to digital cinema, money which is currently not available. Further funds would be needed for staff training and regular maintenance. In addition Cuba has a network of mobile cinemas which bring movies to the population in the countryside without access to a regular cinema nearby.

It is also unlikely that major regional multiplex operators like Cinepolis or Cinemark will step in to help Cuba in the immediate future. Asked by Celluloid Junkie whether Cinemark planned to open multiplexes in Cuba any time soon, the company’s CEO Valmir Fernandes replied, “I feel diplomatic ties are very important, but I also need to see that the business environment is adequate for a public company to operate. We will need to obtain further evidence before we consider a venture.”