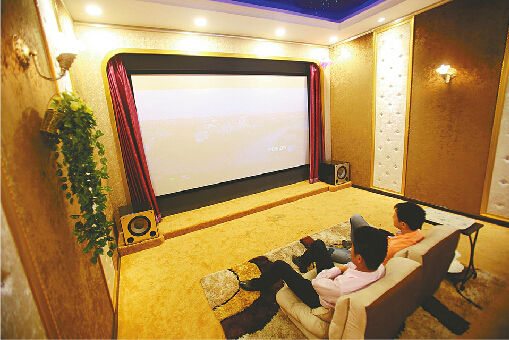 With Wanda Cinemas’ skyrocketing share price pushing the company’s market cap to CNY ¥50 billion (USD $8 billion), China Daily asks “who will create the next 50 billion yuan” cinema business. The answer might not be another Wanda, Imax or China Film Giant Screen but a company like the Love Mu (Love Movies) private theatre chain, targeting small screening venues, particularly in second- and third-tier cities in China.

Already well established in Japan and South Korea, private cinemas are the film equivalent of karaoke rooms (aka KTV rooms). They are places where between two to half a dozen people can watch a movie on demand in a luxurious high-end home cinema setting, including food and beverage service. They typically offer high definition displays and surround sound, along with comfy sofas or recliner chairs and stylish decoration.

While regular cinemas focus on the latest block busters, private cinemas (also known as micro cinemas) focus on the social setting. Growing demand of audience personalisation and privacy are better catered for by small-scale digital operations, rather than the big Wandas. “The private cinema market will be an important future development point of the film market,” in China, according to China Daily, which also sees the likes of Love Mu having “subversion” potential compered to traditional exhibitors.

Love Mu’s founder Ke does not have a traditional exhibitor background, but rather on-line hospitality experience, as head of restaurant reservations for Xiao Unification’s Guangzhou branch and other e-commerce operations. He opened a private cinema together with a friend almost by chance. However, his online experience meant that he developed an O2O (online-to-offline commerce) social platform for the cinema for publicity and promotion. This kept advertising cost down and made rent manageable, since the cinema did not require a mall or a prominent high street location.

Ke’s view is that traditional cinemas as a public place with fixed showtimes and poor social platforms. Private cinemas can by contract be based on user demand, personally tailored content, flexible showtimes, and most importantly, enable the building of social connections. Ke sees a particularly strong demand in second and third-tier cities, where content offering in traditional cinemas is more limited. Ke says that “based on our current customer feedback, it is popular for friends, dating couples, girlfriends, groups of friends and others.”

Love Mu is particularly oriented towards developing the social network platform, with an online guide that will turn Love Mu into a meeting place for strangers with shares film interests. This will be done by integrating Love My with existing apps and platforms, such as Weibo. 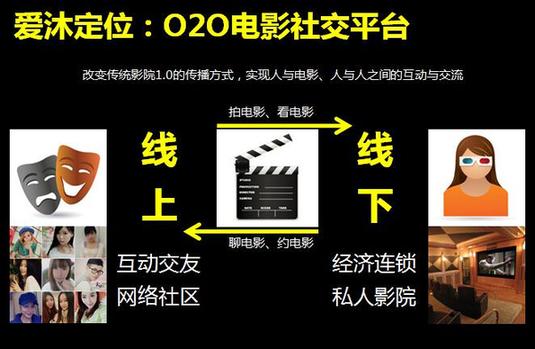 Between October 2013 and now Love Mu has opened in four locations: Zhuzhou, Xiangtan, Huaihua and Wuxi, with plans for a further seven. Ke claims that store profitability can be achieved in the first month of operation with a gross margin of 75%.

Ke also says that an operation with 13 rooms, “simply cannot meet customer demand,” with people standing in line waiting as no room is available. The plan is thus to expand Zhuzhou to 20 rooms and for all future operations to have at least 20 rooms. Locations are under negotiations in areas such as Guangzhou, Foshan, Huizhou, Bengbu, Xi’an and Zhengzhou. Online fundraisers are currently taking place.

Ke claims that his operation has major franchise potential:

Love Mu has also developed partnerships with other local businesses such as Cool Dog Music, Shaanxi radio and television, Jin Yi Theatres, 7 Days Inn,  Zhuzhou CSR and Wangfujing Department Store amongst others. Negotiations are under way with 7 Days Inn to create a private cinema for the hotel’s guests, while Cool Dog Music want an integrated entertainment venue where their members can sing and watch a movie.

Other private cinemas in China seem to be doing equally well.  China Economic Net’s reporter Boling Jun Li recently visited Court Studios in Jinan, which had 30 private cinema rooms spread over 1,000 square maters with six theme packages. In addition to a library of more than 3,000 films it also offers board games, mahjong and offers small meeting spaces. It is open 24/7, including weekend and holidays, with people reserving half a day or a day in advance and often sold out.

As the first private cinema that opened in Jinan in August 2012 it has since expanded to five venues, with the typical audience being couples between the ages of 20 and 40, as well as office workers. In order to book and view one has to first become a member, with current membership standing at 8,000 and a daily average of 10 new members this year. The manager stresses that the rooms are also family friendly, so that once the doors are shut the children can run free without disturbing other patrons.

While Love Mu and the likes of Court Studios make a strong economic case for the success of their business model, the nascent private theatre market faces several challenges, not least the lack of legitimate access to first-run films. Ke says that Love Mu is mainly a platform for classical movies. However, other private theatre operators have been known to show pirated versions of recent releases or been lax in reimbursing copyright holders for screening older films off Blu-rays or HD jukeboxes.

CEN’s reported was told in several private cinemas that new films are often available a couple of weeks after their premier and that private theatres “have their own channels” for obtaining copies. Traditional cinemas say that to operate as a cinema any business needs a business licence, suitable digital projection equipment (DCI-grade), an authorised copy of the film and a series of elements of fire inspection, something which can be found lacking in private cinemas.

When law enforcement officers visited the Zhuzhou Tianyuan district’s “80 Backseat Living Museum” private theatre (below) that changed ownership two months ago, they found that the new owners could not produce any licences or relevant certificates. The business was shut down and issued a notice of investigation and inquiry. It would appear that the private cinema was also playing pornographic films, something which authorities in China take a very dim view of.

Filling A Demand That is Set to Grow

Yet while the private cinema business appears to attract a fair amount of unscrupulous operators, there is no denying its larger audience appeal.

On the occasion of the opening of the Wan Private Cinema in Beijing, Liberation Network noted that “lying on the couch can be cinema, has become the new darling of many white-collar workers in the city for entertainment, as well as dating couples, friends, parties and party of choice for students.” However, it also notes that there are many unresolved issues relating to “screening qualifications, copyright licensing, daily supervision, food hygiene and fire safety.”

Some may even suspect these type of establishments to be fronts for drug dealing and consumptions, as well as a new avenue for ‘flesh trade’ (i.e. prostitution), dressed up as “private cinemas” – charges sometimes also levelled at KTV parlours. It notes that Shanghai alone already has no less than 80 private video bars. Yet like the emergence of VIP cinema lounges and Imax, the growth and emergence of private theatres is a gradual process and has a role to meet a growing demand, as long as it is properly supervised.

Last year, Chinese cinema box office reached ¥29.6 billion, but the number of cinemas and screens, compared to other developed countries, is not enough, moreover, not all the audience, can be catered to in ordinary cinemas. The appearance of private theaters is just one way to fill the demand for personalized viewing, avoid regular cinema ticket queue, bad behaviour in cinemas, or to select and watch classic movie nostalgia films by specific tastes, create a meeting place for young film fans or give consumer privacy and comfortable viewing as a cultural service model.

The newspaper urges the strengthening of private theatre management and strongly enforce copyright, fire, health and food security. It would seem that an operator that can meet all the licence and regulation obligations stands to profit significantly in this latest cinema niche market in China. Whether they can grow to rival the likes of Wanda remains to be seen. 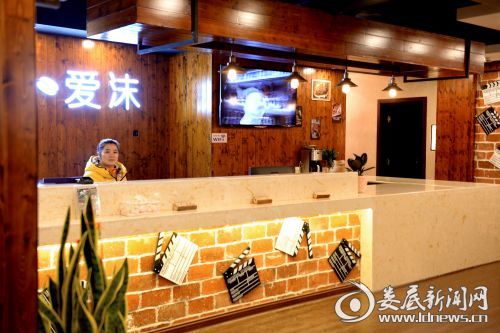